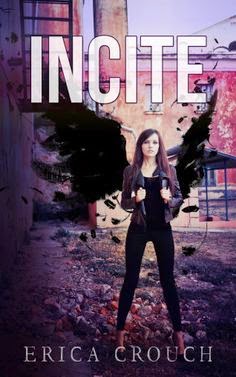 Hell has invaded Heaven and won. Azael is the king of hell, Lucifer sits on the golden throne and the Earth is in ruins

Among these ruins the demon Pen and Archangel Michael try to survive the forces of heaven and hell both of which are hunting them.
While they are running, seemingly doomed, they do find one thing to give them hope: New Genesis, angels and demons who are no longer willing to align with Heaven or Hell. Maybe there’s space for a third way.


I am glad that we got on to the rebellion in this book about half way through because for a large part of this book (and, to be honest, the first book) we didn’t seem to have much to rest on. Azael hates Pen because she betrayed him and how terribad awful is that. Meanwhile Pen and Michael love each other forever and ever because… reasons. Yes, reasons, because they have only been together for such a very short period of time.

It’s rather lacking as a plot line. It’s not even a plot line, it’s just a list of emotions. I’m not even sure of the actions it pushes them into. Why are Lucifer and Azael so invested in hunting down Pen? Why are the angels so invested in gunning for Michael given everything else is going on? It doesn’t help that these heavy emotion doesn’t help these characters. These characters are supposed to be thousands of years old, they’re supposed to be older than humanity itself. And I just don’t see it. They’re so emotional, they’re so over-dramatic, they’re so out of control, they’re so inclined to monologue and angst and… they feel like teenagers.

So all of that wasn’t sold to me - but the rebellion? This I like and I hope it is developed a lot more in future books because it badly needs it. The Rebellion and the whole idea that both Heaven and Hell have lost their way and that the rigid black and white thinking simple doesn’t work in this shades-of-grey world. It adds context to Pen and Michael defecting because it wasn’t just about true love, it was about being deeply disillusioned with their own side.

The rebellion brings a number of demons and angels who are inspired to follow them because they have equally seen the flaws of Heaven and Hell. And it’s well done - it’s not just done for the rebellion as well, it’s also shown through generally unaffiliated angels and demons as well, breaking their traditional loyalties or clearly having no loyalties at all - just doing what they want because neither Heaven nor Hell serves them.

This is an excellent new angle and does a lot to widen the world and the story of the main characters. I just wish there was more focus on it, on the rebellion, on the motives of it, on the state of the world and the humanity who are being caught up in the cross fire of the apocalypse.

But there isn’t a huge amount of focus on it. They join the rebellion but even then nearly all the focus is on Michael being menaced by Azael. The rebellion is, if anything, treated like a tool by Pen. Not only am I not convinced he is swayed by their chosen goals, but I’m not sure she even cares - because MICHAEL TWU LUB.

We do have some belated diversity for this series: Kala is the fourth most prominent character (after Pen, Michael and Azael) and she is a Black angel and either bisexual or a lesbian and in a relationship with Ana who is the leader of the rebellion. It’s also very clear that Ana and Kala are equally as loving as Michael and Pen. This is, of course, especially important give the fact they are angels which will always be of note when talking about divine beings. Kala is also disabled as far as angels go - she is missing a wing which is a disability for them - but still a capable, intelligent and lethal character.

We do have Pen, Kala and Ana who are all major female characters and even Azael’s team of hunting demons has 2 female demons as well who are dangerous. I’m also curious about Lillith who, it looks, is definitely going to be playing her own game (and fiercely resists how everyone chooses to define her).


The story is definitely moving in an excellent direction - we have new plots coming from the demons, we have the rebellion with a whole lot of grey zones and development there. So I have a high hope of things to come… But it wasn’t realised this book. I didn’t like it but I am interested in where it is going.