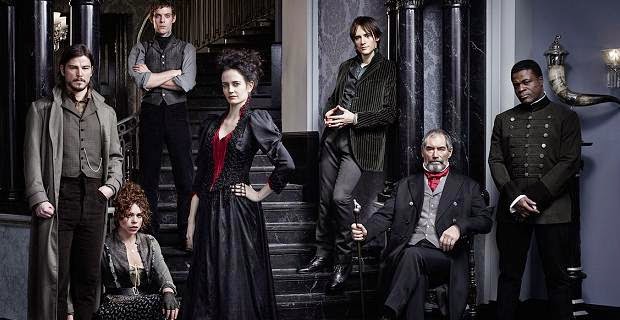 It's snowing and Vanessa is out for a walk.  Everything seems peaceful, that is until Madame Kali shows up and starts speaking in a dead language.  Vanessa senses something is wrong, turns in a circle and begins to get visions of fire and cutting her self. Overcome, Vanessa falls to her knees as Madame Kali watches.

Ethan awakes and finds himself still in the bar.  His hands and face are covered in blood and everyone around him is dead.  A horrified Ethan surveys the carnage.

Vanessa has returned by carriage to Sir Murray's but before she can enter, Ethan stops her to say that they need to talk.  Vanessa and Ethan get into the carriage together and Ethan says that he come to say goodbye because he is not who she thinks he is and must get away before he hurts her or someone else.  Ethan's plan is to find a war somewhere, pick a side and fight.  Vanessa brings up the war they are fighting here but Ethan believes that since Mina and the creature are both dead, they've already lost the war.  Vanessa however does not believe that they are free and clear, countering that in fact, they have only lost a battle. Ethan admits that there are times when he has blackouts and then wakes to blood.  Ethan tells Vanessa that she cannot change who she is, no matter who she saves, or who she loves.

Suddenly, the carriage is attacked.  Witches crawl through the windows attempting to get at Vanessa. Vanessa and Ethan are forced to fight them off. They both escape with a few scratches.  As Vanessa attempts to leave, they over turned carriage and a witch pokes her head through the window speaking in the dead language. The only clear word is Lucifer, which causes Vanessa to respond in kind in the dead language.  Once outside, Ethan and Vanessa survey the damage and find they horse has been eviscerated.

Accepting defeat, the witches now cloaked, move away from the carriage.

The Creature and Frankenstein stand next to the dead body of Brona Craft.  The creature wonders if Brona will remember her past and Frankenstein replies that he hopes not because Brona had a rough life.  After exposing Brona's naked body, together they lower her into a vat of water.  The Creature grabs his things to leave in search for work and warns Frankenstein that he will never be far from him.  Before the Creature can leave, Frankenstein asks if he manages to create a mate for the Creature, does that mean he will be left alone. Unfortunately for Frankenstein,  The Creature responds that they are bound together and questions what Frankenstein would be without his Creature.

Back at the house, Ethan instructs Sembene not to let Vanessa out of his sight.  Sembene questions what attacked them and Ethan simply says women.  Ethan tries to engage Vanessa to see if he can do anything for her.  Vanessa reveals that she knows what attacked them and that Ethan can leave since he was planning to anyway. Ethan points out that the creatures were trying to kill her. Vanessa however believes that if they wanted her to be dead, she would have been dead. Ethan says that he will return tomorrow when Sir. Malcolm returns. Sembene covers Vanessa with a blanket, saying that the past will never leave them and that it's who they are.

Ethan stands in the courtyard momentarily before leaving, unaware that he was being watched.

The Murray's are standing at Mina's grave.  Mr. Murray suggests that he should come home, adding that they were happy once.  Mrs. Murray is of a different opinion, saying that everything that was between them was buried.  Mrs. Murray says that they will remain married but she will live in the house and Mr. Murray is to stay in London. Malcolm appeals to his wife, saying that she doesn't know how hard he tried to save Mina but she points out that they have no more children for him to save or to kill.

Sir Malcolm heads back to London.


The Creature makes his way through the streets looking for a job. Sign after sign says, not hiring. The creature stops  at a Wax Museum and decides to answer the help wanted sign.  He heads into the grotesque area and pauses to cover his face with hair when he hears whistling, only to change his mind and allow his scars to be visible.  The Creature explains that he is there for a job and the owner is surprised that he doesn't find the place unnerving. It seems that the wax museum is now creating chambers of crime - homicide scenes from the headlines.   The proprietor wants help with the construction as well as custodial work. When the Creature confirms that he wants the job, Mr. Putney asks him to come back later and meet his family.  The Creature asks if it's about his appearance and Mr. Putney says that it's not about his appearance but the way he is. Before leaving, Putney shows the Creature the Mariners Inn Massacre.

The inspector is looking over the Mariners Inn Massacre for clues. The owner questions if The Ripper is back again because if not, this would mean that there are two monsters in London. The Inspector reveals that this case is different and that this time there was a survivor.

Vanessa looks out the window as the street lights are being lit. She is clearly agitated. Downstairs, Sembene reports to Ethan that Vanessa didn't leave her room all day. Ethan is shocked that Vanessa is scared of what she faces now.

Still in his laboratory, Frankenstein works but stops when he believes he hears a sound.  Frankenstein decides to have a conversation with Brona saying that it's good to have someone to talk to.  He wonders who Brona will be no, as he places his hand in the water to hold her hand briefly.  Frankenstein follows the scar on her chest and briefly touches Brona's nipples. Frankenstein only stops molesting Brona when he hears a knock on the door, promising to return shortly.  When Frankenstein opens the door, he finds Sembene waiting for him.

The Creature returns to the Wax Museum to meet Mrs. Putney and introduces himself as John Claire. The Putney's introduce The Creature to their blind daughter Lavinia.  Lavinia want to touch the Creature's face and he is resistant saying that it's not a face for touching.  Lavinia asks again saying that she would like to meet him and this time The Creature consents. Lavinia tells Creature that it's good to meet him and then takes The Creature on a tour.  Mrs. Putney questions what her husband was thinking hiring a man with such a face but Mr. Putney believes that they will make a fortune off his face.

The Creature is back on the street walking and Sir. Malcolm's carriage passes him.

When Sir Malcolm arrives home, Vanessa runs into his arms.  Vanessa, Malcolm, Sembene and Frankenstein gather to discuss this latest attack. Vanessa confirms that they were not the creatures they faced before because the new creatures had the devil's mark.  Ethan says that the creatures were speaking Latin but Vanessa corrects his error saying they were speaking Verbus Diablo.  Frankenstein explains that the language in question is a corruption of angelic speech.  Apparently, Satan took God's language and turned it inside out and after the fall of man, Adam could no longer understand God's language.  Frankenstein the scientist kicks in and says that women couldn't be Galilean fantasy.  Sir Malcolm wants to learn the language to protect Vanessa but she is adamant that this is a battle she must fight on her own.  Sir Malcolm however argues that he has lost one daughter and is unwilling to learn another.  Sembene asks Vanessa what the creature are and Vanessa reveals they are dealing with witches.

Back in her lair, Madame Kali lies in a bathtub filled with blood.  When she leaves her macabre pool, Kali addresses her daughters expressing her disappointment.  Hectate steps forward saying that she should have gone because the other three were clearly not up to the task.  Kali says that Vanessa must be more powerful than she is and Vanessa has a protector - a lupus day (clearly werewolf) . Her daughter asks for another chance. saying that Vanessa knew the language. Kali then tells the story of a victorious Roman General because death comes for everyone. With her story at an end, Kali slits the throat of one of her daughters, ordering the rest to take the body away.

Ethan tells Sir. Malcolm that Vanessa will talk to them in their own time.  Ethan reveals that he is cancelling his plans to leave London and agrees to stay with them in the London house for now.

In her room, Vanessa stares at a crucifix. Vanessa then makes eye contact with Ethan who is the hall. They stare for awhile before Ethan retreats to his room.  Alone again, Vanessa lights some candles and kneels on the floor, slicing her thumb with a knife.  Using the blood, Vanessa draws on the wood floor.  It turns out to be a scorpion,  When the thunder sounds,  Vanessa begins to pray, staring at the crucifix.

Kali draws an inverted crucifix on her forehead with blood, promising Lucifer that she has found his beloved and will assault Vanessa until Vanessa is his.  Kali swears that Vanessa will know only suffering promising repeatedly that she will not fail Lucifer.

In her room, Vanessa continues to pray, her hands dripping blood.  As she prays, three creatures appear in her room behind her.  When Vanessa turns her head however she is alone.

Penny Dreadful pretty much picked up where it left off.  In the case of Ethan clearly the fact that he is a werewolf is going to play much larger this season.  He should really have moved on but because he wants to save Vanessa, he is staying.

Speaking of Vanessa, I miss the woman she was at the beginning of the first season.  Where did the smart cracking, wild, Vanessa go?  Is it me or has she become a victim for the men to rally around and save? Yes, she knows more about the supernatural threat they are facing but still the fact that the threat is centered around her is going to make her passive once again.

I have given up hope on learning more about Sembene or having him become the equal of all of the other white characters of the show.  Having him comment to Vanessa about the inability to change the pass makes him read as a wise negro and I could really do without that.  So far all he has done really is wield weapons when needed and sit and wait for instructions.

The one scene I particularly loved was watching Mrs. Murray put her husband in his place.  From everything we've seen, he was a horrible husband and a terrible father.  The fact that he wanted her comfort in a time of sadness and grief despite his years of neglect speaks loudly about exactly who he is.  I was practically cheering when she sent him packing back to London.

It further irked me that he has now decided to make Vanessa his new daughter.  The truth is, Sir Malcolm is just not good at being alone.  His acceptance of Vanessa as a daughter and Ethan moving in speaks to that.  He only seems to want people on his own terms.

Things are heating up for the creature.  With Brona coming to life, it looks like we might get some odd love triangle between The Creature, Brona and Frankenstein.  It was absolutely creepy to watch Frankenstein caressing her dead body.