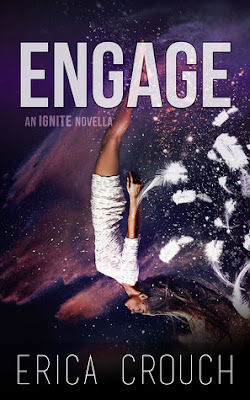 Kala is a guardian angel – but not considered a very good one. She is derided for her disability but, far more, she has a pesky belief that humans should set their own destiny. And that the hard morality of Heaven is too limited and lacking in nuance for the real world.
The angels do not approve – something has to change.
This book is an excellent short story in that it brings a whole new angle to the original series – it’s not an essential angle, you can read the whole series without this short story but it brings some excellent depth to the book series. For me this is exactly what I want from a short story – not an essential part of the ongoing meta (therefore not a necessary read) but also not entirely pointless or off topic
The main series is told largely from Penn’s point of view. Which means we see hell and demons and the many many many reasons why she isn’t happy with either and only affection for her brother and having nowhere else to go keeps her bound to hell. We know why she rebels. We know why she is desperate to find another way. We know why she is rebelling
But Heaven? We’re told it’s rigid but beyond that thrown away line we don’t really know what exactly is so wrong with Heaven. What are the angels so rigid about? What real reason do the angels have to rebel? What was so bad that it would drive angels and demons to ally together in their rebellion?
This is the book that fills the gaps. This shows us heaven, it’s rigid rules, it’s outdated resistance to change, it’s savage refusal to accept any kind of nuance or grey morality. It’s utter rejection of any kind of free well, it’s vicious judgemental nature, it’s constant quest to control humanity down what it considers the true path and, in many ways, Heaven is almost unable to even identify good and purity any more, just adherence to rules.
And backed by all of this is Heaven’s brutal purges of its own, of any angel that dares to be independent, to think of themselves, to make their own judgement – or, almost as bad – allow anyone else to make their own judgments.
Through their story we see why Heaven is just as bad as Hell – rather than just being told and expected to accept it. On top of that we also get to see something else that was only told but not shown – why Pen is so essential to the rebellion and why they need her on side.
This is all told through the lens of Kala as she meets Ana. The exploration of the world happens as their relationship develops and as they both develop and grow as individual characters (with there philosophies also developing as they look at Heaven, see its flaws with ever clearer light and put together their ideas that slowly grow into the rebellion. It’s really well done for both the characters and the story together
Kala is also a very fun character – she manages to be both rebellious and somewhat passive at the same time, which is a fascinating combination. She is rebelling by refusing to intervene, she is fighting the status quo by not manipulating events, by allowing her human charges to live their own lives without her intervention, by not wanting to take part in the wars or conflicts of heaven. By not acting, she rebels.
Kala is also a woman of colour (or an angel of colour), a lesbian or bisexual woman and a disabled angel – she only has one wing which is a major disability among a people and in a world that works on the assumption that every being can fly. She is constantly assumed to be weaker or less capable because of it, despite her fierce pride, refusal to hide her wing or absolute insistence that she is just as capable of doing her job as any winged angel – something she proves repeatedly. She also makes a point on pursuing her relationship with Anna because it quickly becomes important to her –she isn’t willing to completely sacrifice the chance of happiness for the sake of some higher purpose. She isn’t selfless to the point of martyrdom. It’s a perfect example of knowing what they’re fighting for.
This book definitely fulfilled all the criteria of an excellent short story. It has developed some important characters who didn’t get enough focus in the main plot because they’re not protagonists. It filled in world building not experienced by those protagonists and through it all greatly enriched the series as a whole.