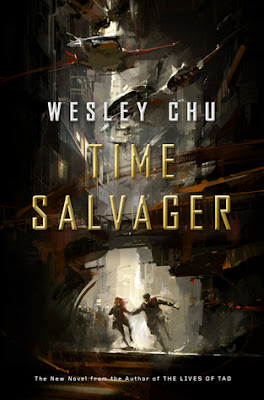 James is a Chronoman, one of the elite few who travel back through time to try and salvage what he can for a broken present without disrupting the timeline. It’s a thankless, desperate soul destroying job that only seems to postpone the inevitable – and James is sure he cannot endure much longer

Until, in the past, he meets Elise and does the unthinkable – he brings her to the present. He breaks the most fundamental time law and now he is a fugitive pursued by his own agency and worse, one of the most powerful mega-corporations in the solar system who have their own nefarious agenda.

But Elise brings with her something even more precious - hope

I love the world building of this book – it’s a truly fascinating dystopian world where the people of our far distant and ruined future are using time travel to literally mine their past for the resources they need to keep the future functioning.

I love the whole concept of the time laws – ways to remove things from the past, to claim resources and items, without actually disrupting the time stream. Inevitably that means hastily grabbing items before massive disasters and catastrophes, taking things that would be destroyed anyway so the time line isn’t disrupted.

There’s a wonderful theme of how decayed everything is becoming in this book which is done excellently in two ways. Firstly, we have the very overt descriptions of just how terrible things are. A lot of these are from James’s memories of his life in brutal refugee camps and his experiences of other times. We then have Elise with her very overt horror over what the world has become, how destroyed the Earth is, how things she took for granted as basic items of life have now been all but lost to the ravaged

But this first track is underpinned more subtly by the lots of little hints that things are getting worse, resources are getting more stretched – from the lack of chronomen each year, to the sheer desperation of having to send people back in time to harvest things like wood, to the fact each time and place can only ever be used once. We clearly see that the desperate temporary measures they’ve taken to try and keep humanity going are not going to last forever. It adds together and really informs the plot by adding not just the “everything is terrible” which is common in dystopians but also, with excellent subtlety, pushing the addition sense that “and it’s all going to get so much worse.”

This really does affect the whole story – the despair of the Chronomen becomes so much more apparently when you realise they’re swimming up stream and losing ground. Levin’s epic nobility and rigid following of the rules seems all the more pure – and all the more pointless – when we see the state of the world. Valta corporation’s ongoing greed and appalling self-interest seems all the more small minded and destructive in the light of this despair.

Which brings up another awesome element of this world building – time travel. Time travel allows us to see the solar system through the various points in history where they salvage from – and we see the many many many times and places where humanity have done their utmost to destroy themselves. Through this history of destruction and war we see the same mistakes being made again and again –and continuing to the present with the corporations replace the many factions constantly contending for dominance, chewing through resources and leaving destruction in their wake.

This all lead to the wonderful conflicts of the chronomen, according vast privilege and power but by continuing to go back in time they are the ones who are most aware of how broken things are and continually have to do terrible things for the sake of the future. We see this through James’s terrible mental conflict and degradation as he is constantly faced. As an interesting parallel (which this book is full of – it really is excellent at its themes) we see the time agency itself with all is power and privilege, ultimately riven with corruption and completely helpless and ineffectual considering the corporations’ control. Again, perception of power is grossly undermined by the reality behind it.

This wonderful world, concept and excellent writing is set off less by the plot but by the four main characters and how they really let us see the world from such different angles. We have Elise, idealist from the past, from humanity’s golden age completely overwhelmed by the awfulness of the present – yet because of that she is the only character who actually has a sense of hope and vision to fix the world rather than just survive in it. We have Levin, the auditor, one of the main enforcers of the Chronomen, a man of integrity, of rigid honour and a true believer in making the world better and the role the chronomen play – or are supposed to play – within that. He is a man of towering integrity and, because of that, probably is more out of place in the world than Elise. James, the chronoman is the overwhelmed, mentally ill, alcoholic  veteran of a thousand time jumps, traumatised by what he has seen, the people he has left to die teetering on the brink of collapse and clinging to Elise as she expands so much in his life. And, late to the game, we have Grace who is Awesome. History’s most brilliant woman, an elderly (yet sexual), brilliant, sharp tongued awesome character with an infinite sense of the practical – I would read an entire series of books about Grace alone.

These female characters are excellent, in terms of further inclusion we’re shakier. There are no LGBT characters and, beyond some historical people from distant past times, there are no overt POC. Some have names that imply they might be (Elise Kim, Securitat Kuo, but I don’t remember anything more express identifying them as such and I’m wary of relying on surnames as an inherent racial label, especially when we’re considering stories set centuries in the future in a completely alien context), but the only clear descriptions are of the space born – where it is states they are all super pale because they never go in natural sunlight which both casts them all as pretty much white (or most likely) and it also makes it hard to define any other character as POC if they’re described as more than James since that’s both a pretty ambigious description anyway and, given James’s pallor, also covers just about anyone who isn’t albino.

Inclusion issues aside, I loved this book – it was original, nuanced, had excellent characters and, above all, was really well written. The amount of world building packed in without it being convoluted or contrived. The amount of theme and nuance depicted with just a few hints and implications is one of the best I’ve read. The concept is original – the whole book is a definitely excellent read.