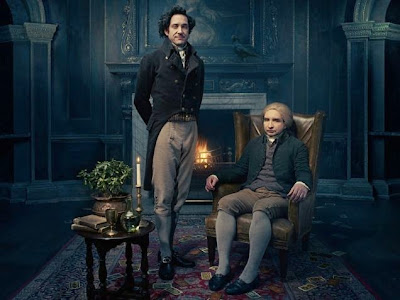 War – a massive battlefield where English and French forces clash. In a fort Jonathan is called on repeatedly to use his magic to aid in the fort’s defences with his friend the major repeatedly yelling “Merlin Merlin, problem! Merlin” – until he is killed. The attacker then comes for Jonathan and the wizard snaps and kills the man with magic

Really impressive, shiny magic. But something he said he wouldn’t do

He returns to England, apparently after the war and writes his book as he promised Arabella he would (abandoning practical magic). She is loving and he is clearly haunted – as we see in flashbacks back to the conflict (and the major isn’t dead, merely inconvenienced).

Wellington remarks the war is over – but also pointedly asks “what do you think they’ll do with us now?”

In the present Arabella illustrates his book and they continue to be loving even as Jonathon’s pain is barely hidden and Arabella’s love clear.

Meanwhile Norrell berates his publisher for daring to publish Jonathon’s book. The publisher isn’t impressed, he’s a publisher and he has no truck with Norrell’s “orthodoxy.” Or his threats. Or drama.

Norrell and Lascells both climb on their respective crosses, whining about how could Jonathon do such a thing and alas, poor England. Childermass’s facial expressions are just awesome through all this.

When Norrell takes his concerns to Sir Walter, they’re worried because the Raven King is being used as a symbol by Luddites and the Swing Riots and they even believe he is coming back. Norrell thinks this is nonsense- but seizes on something Sir Walter fears – rioting poor destroying machines that cost them their jobs – as an excuse to push opinion against the Raven King and Jonathon’s book.

The Gentleman’s plotting begins – a man riding through the snow hears bells and sees the fake!Arabella struggling through the snow, though she doesn’t come when he calls her. The man goes to tell Jonathon. Of course, Jonathan insists Arabella never left home.

Jonathan and Arabella settle into quiet, contented domesticity and hope to have a child.

Meanwhile Lady Pole has a terrible nightmare in Honeycut and Segunsus’s institution – she warns them something terrible is going to happen to Jonathan. Of course, she starts babbling making no sense.

As she screams her warning about Jonathan not making the bargain, Stephen knocks on Arabella’s door and takes her away “to see her friend.”

The next day, Jonathan realises Arabella is missing. Jonathan uses magic (thoroughly scaring the maid) to find Arabella still in hr night clothes being hastily sped away on a carriage. Jonathan gathers a crowd and they lead a search party (seeming to ignore the scrying he just did?). Real Arabella is taken to fairyland, hurried along by Stephen– and Fake Arabella returns to Jonathan and makes him say he accepts her as his wife and that he loves her.

Real Arabella is taken to Lost Hope to meet The Gentleman – and tells her Jonathan sold her in exchange for a piece of wood (fake!Arabella). Lady Pole is also there and coherent. Arabella is enchanted and dances with The Gentleman while Lady Poke tries to scream to her.

Honeycut and Segundus think she sleeps peacefully, but Honeycut remembers one of the stories she told while babbling and he believes there is more to Lady Pole’s babbling than just babbling.

The next day Jonathon wakes to find fake!Arabella apparently dead. He calls Henry, Arabella’s brother and he collapses in tears, with Jonathan desperately trying to be properly reserved. Of course part of that is because Jonathan refuses to grieve – he’s going to bring her back to life, regardless of Henry’s objection.

Norrell returns home and Childermass expresses his disapproval of his continued attempts to sabotage Jonathon’s book and also tells Norrell that Arabella is dead. Jonathan writes to Norrell asking his advice on how he resurrected Lady Pole – and promises never to use magic again. Lascelles doesn’t see this as necessary since the rumour mill that John used magic to kill his wife is already grinding away and is reputation will quickly be in tatters (especially if he performs a gruesome resurrection). Childermass is thoroughly contemptuous about how mercenary and callous Lascelles is – and appeals to Norrell while Lascelles just demands the servants be removed. Norrell agrees and Lascelles, uninterrupted, speaks further to push Norrell against Jonathan, the nasty manipulative weasel.

He makes his goodbyes to Arabella and they have a funeral for her, led by Henry (a vicar).

Stephen is sent to break the news to Lady Pole who insists on referring to Arabella as far away rather than dead. While he is there Segundus and Honeycut ask if they can provoke Lady Pole to babble in riddles so they can look for the patterns behind it which Honeycut thinks he’s discovered – Stephen, of course, refuses. Segundus decides to go ahead anyway – since he sees the same magic on Steven as is on Lady Pole.

But Lady Pole insists – for her freedom, for Arabella’s freedom even as Stephen protests – he points out Arabella, enchanted, is happy about both of them have survived – and they should accept their lives and be thankful. Lady Pole tells him his mind has been poisoned. They guide her through the fairy tales she tells, recognises the patterns and shifts of these tales being told from the fairy’s point of view – and Honeycut asks to write to Jonathan for help. She agrees.

They also get a new inmate for the asylum – Vinculus who gives a message to Stephen “name the slave” which is cryptic but Steven is, understandably, offended.

Sir Walter goes to check with Norrell, bringing one of Arabella’s picture of the Kings Roads behind the mirrors and Norrell says dire things about Jonathon destroying the country and magic. He and Lascelles call for the magical court – and for a law against the Raven King. Childermass remains intensely disapproving.

Childermass goes to see Jonathan – being spotted despite literally turning into shadow. He has his talents, does Childermass. Jonathon shows Childermass his pictures of the King’s Road – and acknowledges him as a magician and they discuss the Kings Roads, why they have recently been opened; he also encourages Childermass to join him as pupil and assistant, not servant. Childermass seems genuinely flattered – but refuses. He also has an interesting intention: should Norrell win he will leave Norrell’s service and take up John’s cause. Of course, should Jonathan win, he will take up Norrell’s – then there will always be 2 magicians with differing opinions.

Childermass warns Jonathan that Norrell is trying to stop his book – and Jonathan is enraged, running through the mirror to Norrell’s study where he rampages around. He rages and berates Norrell, shifting to asking why he wouldn’t help save Arabella even as he is dragged from the house. He continues to rampage outside and is picked up by the watchmen and taken to the prison.

But not just for breaking into the house – he is accused of trying to murder Arabella by witchcraft. Jonathan is determined to summon a fairy… and seems to realise to deal with the fae you need to be insane and to wander e wilderness even as the Major tries to use Wellington’s influence to have him released. Jonathon needs no such help – there is a reflection in the water of his cell.

I’m intrigued by Childermass and want more of his secrets. At this point I would lay odds on him actually being the Raven King

I’m not fond of Arabella being used to target Jonathon or the Gentleman’s infatuation with her. Couldn’t have had him intrigued by the wizard Jonathon rather than being romantically infatuated by Arabella? Rather than make Arabella a damsel?

Still, I am hopeful that Lady Pole, Arabella and Stephen can come together to defeat him

I wonder at Stephen, has he been converted and convinced by The Gentleman? Or has he fully accepted his helplessness? Is he merely more accustomed to having to accept things the way they are rather than the way he would want them to be? Is it a little of both?