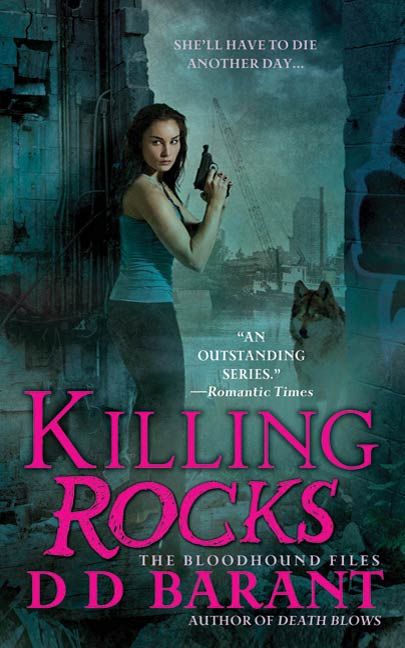 With a lead on Asher and Stoker, Jace is headed to Vegas to hopefully catch the one mage who can take her home and fill out her employment contract by taking Stoker out. Naturally, any plan that Jace is involved in cannot run smoothly.  Before she knows it, Jace is seperated from her team, Charlie has been enchanted and her only two allies are Tair - her former doctor/friend turned evil and a spy from another world she doesn't know.  All of Jace's choices are bad but she knows that she must move forward if she has any hope of saving her friends and while she's at it, the world.

Of all of the books in The Bloodhound Files that I have read to date, Killing Rocks seems easily the most confused.  First, we have the switch to several different planes of existence and the creatures which inhabit them.  It made it hard to understand what was what and where exactly the story was taking place at any given moment.  There were too many unfamiliar myths wrapped into the story and some quite frankly never become relevant.  At times, Killing Rocks is overly descriptive making it a struggle not to skim - a struggle I lost in passages of the novel.

In Killing Rocks, we saw a lot of Jace's former life as part of a dream spell which haunted her.  In these scenes we saw her work interactions with serial killers, trying to assure that they paid for their misdeeds and the toll it took on her.  This is one of the few times we have seen Jace vulnerable and it really worked.  The kick ass protagonist able to whip her gun out and order people around is a bit of a cardboard trope and Jace's backstory and personality needed to progress beyond the constant and mostly juvenile sarcasm.

In Killing Rocks, Barant started to deal with what makes one a slave, with uprising of the golems.  Charlie believes strongly that golems should be in charge of their own reproduction and no longer wants to be viewed as a commodity.  He tells Jace that lems are people even they don't care about food or sex.  It takes a little while for Jace to start to see Charlie's point of view and when she does, she realises that parents don't charge their children for being born, yet that is not the case with Lems. She further realises that the right to procreate should be a basic right, yet it's withheld from Lems.  This line of thought by Jace is unfortunately very brief.  I think that Barant could have delved deeper into this.  I did however like who the world learned how central lems are for running it efficiently.


Once gain The Bloodhound Files continues it horrible ableism.

“I am different. I’m a criminal profiler for the FBI, specializing in hunting down homicidal psychos—a job that doesn’t seem to exist here. Pires and thropes and lems don’t go crazy—well, they never used to, anyway—so they need me to hunt down Stoker, who’s definitely out of his gourd—”

The woman in the flowery dress shakes her head. “I don’t know what that means.”

Nasally Mustache frowns. “You’re no different from anyone else, Jace. You have to accept that before we can help you.”

“—insane in the brain. Off his meds. Unable to locate his marbles. Needs to be fitted for a long-sleeved love-me jacket so he can hug himself all day long. Bats in the control center, long-term resident of a rubber room, lights are on but so is the  VACANCY   sign—”  (pg 4-5)

Could Barant have included any more slurs for mentally ill people?  If that were not enough, Barant has Stoker apologise and admit to being unbalanced.  The thing is, I cannot get behind the idea that Stoker is a terroist when there are only one million humans left and just in world war II alone, pires slaughtered 6 million of them so they could reproduce.  Rebellion isn't supposed to look pretty and it seems as though humanity has undergone a genocide.

We were introduced to a few new characters of colour at long last.  One is Felicia Mbunte, a spy trained by the KGB whose expertise include: handling a blowgun, also a silver-titanium alloy garrote. Felicia is also a sniper.  With all of that expertise and lethality you would think that Mbunte would have a large role but unsurprisingly bites the dust rather quickly after being introduced with little to know character development.  That's about bar for the world Barant has created so far. There's also Ahaseurus who at this point I am inclined to read as a POC though the descriptions of him are ambiguous at best.  Unfortunately, Ahaseurus is not part of team good guy and is in fact determined to rule the entire world.  Having an antagonist of colour isn't a bad thing but having that as one of the only representations really is particularly when all of the people on team good with the exception of Charlie the Lem be white is pretty telling.

In terms of GLBT people, this series continues to be absolutely erased.

As this series goes on, the stories seem less and less well defined.  It feels like Barant is just throwing ideas against a wall and waiting to see what sticks.  At times the writing isn't even really coherent.  This is book three and while we know more about Jace's backstory she still hasn't grown in the least bit as a character.  She's still ridiculously stubborn and more than willing to walk into a dangerous situation without thought.  When Asura first kidnaps Jace, it's because Jace decided to meet with her without backup or telling anyone where she was going.  There's off the cuff decision making and then there's just stupidity.  At some point Jace has got to grow of this story is going to get old really fast.

I don't feel like The Bloodhound Files is reaching towards anything.  It simply feels stagnant and repetitive now.  Barant just keeps introducing myths and super powers and none of it serves to really enrich the world.  It feels like he keeps pulling the same rabbit of a hat. Killing Rocks is easily forgettable and at time just plain boring to read.