Gray Moon Rising (Seasons of the Moon #4) by SM Reine 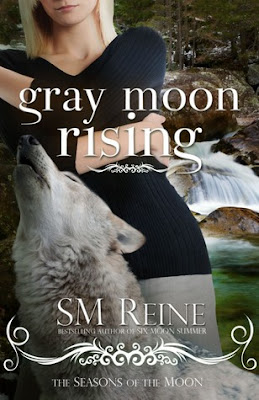 But the mountain where it all began is calling her – and not just her, but all the werewolves in the world are being drawn back to the source. And were werewolves gather in such numbers, so too do hunters.

I have to say I am a little disappointed, in the end, by how Rylie became the superior Alpha which I’ve seen in other series of books set in this world. I expected her to do some thing or learn something or achieve something – I expected her to earn it in some epic, awesome moment. To have it be bestowed divinely without me seeing particularly why felt like something of a cop out. I expected this series of books to continue to show her growth as she went from ordinary teenaged girl to confused werewolf and eventually to something even more – and I feel it didn’t quite reach that potential.

Not that Rylie didn’t grow and change, in fact her progression through the book is pretty excellent. She begins fully reeling from the deaths of the last book. She is consumed by guilt, suicidal and generally not entirely sure she shouldn’t die – or that all werewolves shouldn’t die for that matter. It’s one of the interesting conflicts of this series – while it’s nice to think werewolves are being persecuted and attacked by the big mean hunters the fact remains that they are out of control when they change, the can’t control their changes and they do kill people.  Rylie herself has killed people, innocent people.

But we see her concern grow for her fellow werewolves far more so than for herself as she struggles to reconcile with her actions. Concern for the other werewolves also drawn to the mountain, worry about them being hunted. I love how she finds the value of werewolves through her worry for others, through seeing them as people being hunted and people to save even if she can’t see herself that way. And I know that there’s a whole lot pure martyrdom in the genre, especially with women, but working with her the guilt and pain means that this is far more developed than how we normally see the trope

This is also why I was a little disappointed by the whole superior Alpha thing – because I could see where Rylie was going, her concern for others, her willingness to bring the werewolves together – she was heading towards alphaness. She was getting there – she just seemed to reach her destination before actually, well, reaching there.

The hunters bring their own nuance – they, and the union, are not generally evil vicious hunters. They are legitimately trying to protect people from rampaging monsters and the werewolves definitely are rampaging monsters, albeit not by choice or design and even though they wish it were otherwise.

Until we reach Eleanor. I really think with all this nuance and levels and truly complicated conflict that she stands out as outright cartoonish in her evil. She is the irredeemable, empty caricature of evil. It certainly cuts through all the levels and gives us an evil, go-to antagonist but I’m not really sure if it was remotely necessary. It took something from the narrative to decide to cut through all these layers with Evil Eleanor who may as well have drowned some puppies and grown a moustache for her to twirl.

I also found the world building somewhat lacking here – or rather incomplete. We have a vague idea of ghosts/spirits/something made werewolves (and kind of screwed it up) and now they’ve called in all the werewolves for reasons and Rylie is alpha for… reasons and now she will do… stuff. I feel like I’m only getting half the story, like there’s a big chunk missing out of Rylie’s origin story – and I think this, the last book in this series, is supposed to conclude Rylie’s whole beginning but there’s too much missing. Too much was spent on random woo-woo, on Eleanor being the most evil of evils and, of course, the whole Seth and Rylie romance which I really really didn’t care about (or the many many conflicts between Seth and Adam boiling down to jealousy)

Inclusionwise, Seth and Adam are Black and, after Rylie herself they are the biggest characters in this book by a long margin (I would say there are only three characters in the book). They are intelligent, capable, skilled and with their own hopes and dreams and agendas that they are willing to fight for. They are free from stereotype – but equally free from cultural markers; unlike some of the more minor werewolf and Unions characters who are POC (Middle Eastern and Japanese) who do carry markers of language and culture albeit neither are developed a great deal (though the middle Eastern hunter is noteworthy as the one who argued for compassion and is most adamant that hunters exist to protect not to kill)

Technically there are LGBT characters – in that we were told in previous books that one of these characters is a gay man and one is a lesbian. There is no mention of it in this book, but then there’s almost no mention of them either.

I liked this book but am left frustrated by it. I thought the whole book, this whole series, was gearing up for a massive character growth for Rylie, for a moment where she finally arrived and I saw the moment when she finally became the character we see in the other series. And when it happened it was… anticlimactic.