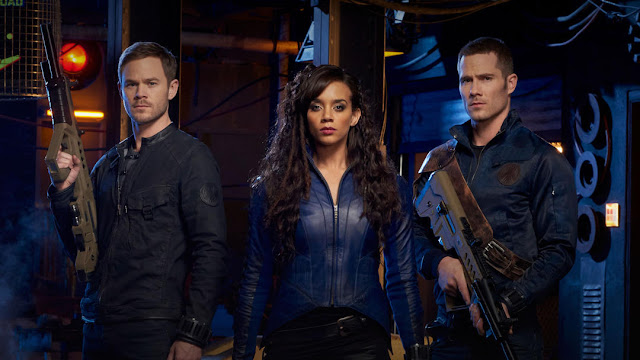 We open to a dusty alien planet called Westerley (a planet in a quad planet system) and a woman moving through the Badlands. Move to two men in an ominous dank room torturing a third man. Seems the captured man stole their ship – or took a ship they were going to steal. Either way they’re not happy about it. Another man drags in the woman – which is pretty bad for the captured man who clearly expected her to rescue him

Plan B involves demanding to see the boss, Corin. And then it’s back to hidden Plan A – lure the boss out so the two of them can take him in (using hidden weapons and nifty skills – and having the scared captured damsel be revealed as both the boss and awesome) “In the name of the RAC you are locked and served”.

They arrive at the prison (and they have a nagging ship computer) to hand over their bounty. They’re recognised as Dutch (level 5 bounty hunter) and John (Level 3). Some snark later and John gets a litte message about an unclaimed level 5 bounty for a Kobee Andreas which catches his interest- marked as a “kill”. He hastily changes his plans to take a few days off.

We catch up with Dutch telling a bar tender friend, Pree, how weird it is for John to take some down time without her. She is sure something is up.

Among this we get some nice world building nuggets of an oppressive police force – who are working or the “company” getting more stringent because of a possible strike; so it’s not a happy fun place.

To the Slaver space ship Arcturus (this does not seem to be a happy fun future) where several “passengers” pay off their fare to one of the colonies by cage fighting. John has signed up, specifically to fight Kobee Andreas.

Back to Dutch who goes to see an old pro, Bellus, for some new jobs, preferably some nice easy level 2s or 3s. To which the Bellus tells her she should focus on her active warrant which rather bemuses her because she’s pretty sure she doesn’t have one. Yes, John signed her up – even though she doesn’t do Level 5 warrants because they’re kill work and she refuses to do them. And John’s used her name because he’s a level 3 so can’t do Level 5 warrants. Naughty boy; Dutch covers for him.

Dutch flies out, calling John for a whole load of “what the hell do you think you’re doing?” but John promises to explain later. Then he hangs up on her – “oh hell no!”. And the snarky computer is awesome.

John enters the ring – and Kobe recognises him, though John calls him D’avin. He’s there to break D’avin out and the implication is the warrant on D’avin is because he owes a debt. His plan for springing him goes awry when D’avin actually attacks him

Outside the cage, Dutch tries to get the fight called off fight the fight organiser knows exactly how little he has to help her under the law (can’t hinder, has no requirement to help though). She sees another man watching the fight looking all ominous who she recognises – Fancy Lee, another bounty hunter looking for D’avin. A double booked kill warrant; Dutch tries to talk him out of the kill.

Inside the cage we find out that D’avin and Johnny are actually brothers by Johnny ranting about how their mother died and D’avin was nowhere to be found (I suspect he resented his parents due to completely unnecessary punctuation in the middle of his name – it’s not like anyone’s even pronouncing it as a glottal stop, it’s just there). Dutch finally gets through and learns that the mark is more than just a mark to Johnny – and Johnny learns D’avin is actually fighting him to save him, the fights are rigged and if you’re a good fighter they pour on more fake debt to keep you.

Dutch shoots D’Avin in the neck with a dart a second before Fancy makes the kill. Apparently projectiles count as physical contact so D’avin is now Dutch’s. A sinister guy follows as they take D’avin out and stabs the fight organiser in the neck. I would say for funsies but he has the classic emotionless villain face.

Back on the ship and Dutch lets Johnny know how not impressed she is with his half-arsed plan that dragged her into this disaster and D’avin wakes up. They give a quick summation of the quad-planets, the control of the company and their jobs as independent bounty hunters. Also that kill warrants don’t go away – wave after wave of agents will be sent until D’avin is dead. There’s also brother drama since D’avin cut all ties with his family 8 years ago

Dutch explains all of this to Bellus, her handler who promptly smacks her for utter foolishness. John totally deserved that, not her. Dutch has 21 hours before her warrant is in breach and Fancy saw her take D’avin alive so there’s no room to wiggle out of it. So options: 1) turn in Johnny for fraud losing him his license and being sentenced to 5 years hard labour. Minimum. Dutch says no. 2) Kill D’avin finishing the warrant – which is another No, Dutch only kills in self-defence. Option 3) find out who put out the warrant and find something they want more

Back on the ship, Johnny offers to turn himself in which Dutch nixes and instead offers her half-arsed plan. The warrant was ordered by the company itself – she sees this as an out. The increased Company activity they saw means, she thinks, the company is looking for someone. They’ve just got to find them first. In 18 hours. First step means talking to god

This doesn’t please Johnny, I’m assuming this is because god is a person and not because Johnny is an atheist impatient with her prayers

They return to Westerly to a cult of people who suffer for money for religious purposes (I suppose buying prayers has happened so why not buying masochistic contrition?) they speak to the guy, Alvis, (god I presume) involved in both the church and the resistance. He knows the Company is after one of his former guys, Rolly Desh who stole something he shouldn’t have. Alvis isn’t thrilled at the idea of handing over a guy but he’ll do it because Rolly is pushing for a war before they’re ready so it’s in Alvis’s revolution’s best interest if Rolly is removed from the picture. Extra world building nugget, Killjoys (bounty hunters) are neutral and eschew all nationality.

D’avin and Dutch snark back and forth a bit (with the extra nugget that D’avin was a soldier) and he wants to help them; John disagrees but Dutch insists and since she’s the one getting them out of it what she says goes.

On to the planet of Qresh and more nifty world building. They infiltrate a garden party and pick out their target (and the data chip he stole) among the monks there all seems to be going well – until Fancy Lee almost hits Dutch with a poisoned blade – he does graze her. Why is Fancy attacking her? Because this is what the RAC does – if an agent fails a kill Warrant the warrant ends up on her until she fixes it.

Ominous evil guy is also there. He goes to the drugged Dutch as she recites how she plans to stop the poison (something he apparently taught her). She holds a knife to his throat that doesn’t even slightly bother him – he moves it away, cutting his palm when he squeezes it. He says he’ll help her – and calls her Yalena

Flashback to child Dutch being given a red box by the Ominous man who trains her in weapons and has her kill people. Each time she gets a red box she gets a duty (and, presumably, something killy inside)

Meanwhile D’avin and Johnny corner Rollings who pulls a gun – Johnny works to talk him down but D’avin just shoots him in the head and they tale the computer chip.

Dutch wakes up injected with the cure in time to hear D’avin and Johnny running pursued by many guards. Johnny tells D’avin he needs to use non-lethal settings on his gun because of the whole warrant thing – D’avin doesn’t think that’ll work. But then Dutch arrives to the rescue wit nifty nifty toys and niftier fighting skills. D’avin is duly impressed.

Back in the market, the company agrees to the deal Dutch made. But the RAC (bounty hunters) call Dutch in. They’re not happy with her playing by her own rules as the RAC official makes clear – no alliances, no deviations – the Warrant is All. He’s not happy but for some reason she has been cleared – which makes no sense at all. Another mystery.

Celebrations in the bar and D’avin presumes to ask Dutch personal questions which she is quick to turn back on him to ensure mutual silence. He tries asking Johnny but she’s kept a lot of secrets from him as well – D’avin puts his concern down to worrying that his little brother is working with a very mysterious, unreliable partner

Dutch returns to the ship – and there’s a red box on her bed.

Ok… this isn’t our genre. I have to admit that. We do tend to avoid pure sci-fi, taking shows which are more based on our world (Urban Fantasy, dystopia) and the speculative fiction genre is so huge that we do have to draw lines somewhere… but some things just look like such damn fun that you’ve got to give them a chance.

Anyway it’s kind of dystopian, right? That’s my excuse and I’m sticking to it.

It is fun. It has a nice dystopian, lawless spacey feel, has some actors I really like in it and the potential to be a whole lot more. I like the character interactions so far and the potential is pretty high. I could definitely love this show – if it develops well.

I also have to admire how the world building was done. A whole lot of information was passed on in lots of little, quite subtle moments. No clumsy info dumping but a I still got a nicely solid sense of the world

I’m sitting on the rest, as is my habit, as there nothing worse than commenting on the inclusion of the pilot only to have all the minorities killed off by episode 6. But one of the main three cast is a WOC and we have, initially, what seems to be a pretty big secondary cast member as another woman (and a mentor – to a woman. So she’s neither there to make a man special nor in competition with Dutch) and a sprinkling of other POC in roles that may develop into the more.