The Returned by Seth Patrick 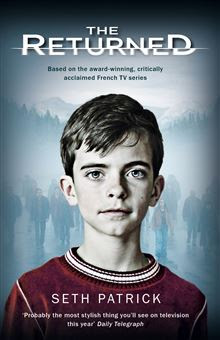 When I picked it up I thought it would be the book that The Returned television series was based on – my mistake, it’s actually a book based on the television series (both of which are based on another book which is rather loopy). Book spin offs from TV shows happen and we’ve reviewed a few before so while it wasn’t what I expected I was curious about where it would go, given the mystery and unanswered questions of the series

It turns out, however, that “based on” is not exactly an accurate description of this book. “Blatant copy” is much more accurate. This book is a recap of the show. Literally, someone took the script sat down and just wrote it as a novel. The characters, plot, setting, conversations – pretty much everything is exactly the same. It actually reminds me of a blog recap without the commentary. I almost DNFed this book from sheer redundancy since I already knew what would happen in painful detail – but I held on to the end to see if anything changed. Lack-of-things-to-spoil-alert: nothing did. Not one damn thing

The only real difference between the two was medium. Since this was a book we had a lot less of the dramatic visuals and ominous music that were so prevalent in the TV series (which is absolutely terrible because this entire tv show was BASED on the atmosphere – it’s like taking a Michael Bay movie and removing the explosions an half naked Megan Fox – there’s nothing left to it afterwards). We lose a lot of the ominous because of this – for example, when Victor appears on the tv show he is so utterly creepy that the average viewer wanted to kill him with fire – that’s completely lost in the book. And Victor is oddly chatty and not ominously silent.

Instead what we have is the ability to see things through the character’s eyes, from their point of view. Yes, this book is a switching POV 1st person. And this is AWFUL. It is awful because it takes all the nuanced depiction of the atmosphere, well acted portrayals and layered conflicts and decides to info-dump the hell out of all of it. Do we need to see Jerome struggling with the conflicts over Lucy, his family and his general feelings of failure and inadequacy? Nope because he’s going to info-dump all of that in one big self-reflecting chunk of text! Lena dealing with survivor’s guilt and fear with her returning twin sister? Sure we could show a series of developing conflict – or we could have her exposition an appalling info dump.

To put it another way, all the ominous atmosphere and development that made the show actually worth watching is just not there! It has extracted everything about this show that made it worth watching.

I find it pretty pointless of me to review the book any further – my recap of the TV series is already up, my impressions of the whole season is included in the last episode recap. I’ve covered pretty much every other way the book deviates from the TV series – it’s redundant of me to copy and paste what I’ve already written

Which somewhat sums up this book – if you have watched the TV series it’s based on, then this book is redundant. If you haven’t watched the TV series, I’m not sure it would attract your interest or attention; in fact I don’t think it even stands that well apart because it has all the hallmarks of a show-to-book spin off (lack of physical description, for example, because we all know what the characters look like). Is it for people who are curious in the TV series but are put off by the idea of subtitles? (there’s an American remake for that).