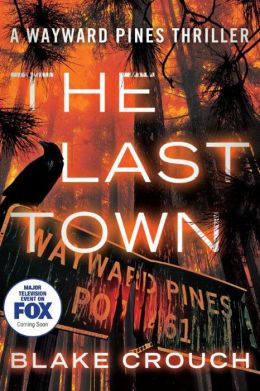 The Last Town is the last in the Wayward Pines trilogy. When Ethan decided to pull the trigger and reveal to the citizens of Wayward Pines the truth about the town he couldn't even have begun to imagine what it would cost. Ethan must find a way to stop all of the death and get the town on track but the people must able to him owe their allegiance to  David Pilcher, the town's creator. David is not happy with the fact that his self styled divinity is not being respected or recognized in a manner he finds suitable and is therefore willing to do anything to teach the residents a finale lesson.

It's impossible to read Pines and not want to find out how this story ends.  Pines is really about the mystery of Wayward Pines itself.  Wayward tends to focus on how to deal with what Wayward Pines is and The Last Town  deal with the survival of humanity itself.  Of the three books in this series The Last Town is easily the least nuanced because it is essential a horror book.  Ethan and the residents of Wayward Pines spend the majority of the book rushing from place to place in order to either a) take control away from Pilcher or b) stay one step ahead of the abbies which want nothing more than to slaughter them.

The action pace of the novel allows no room for further character development.  What little the residents do communicate with each other is often stilted and agonizingly drawn out. The women really suffered The Last Town which isn't surprising as the the Wayward Pines series falls into the all to typical dystopian fantasy trap of making everything about the straight white male. I had hoped for some time that Theresa would really come into her own.  At the end of the day, Theresa ended the book as she started, a wife and a mother.  Unless she is forced into action, Theresa is content to hope that Ethan will save her.  Trapped in a jail cell and surrounded by Abbies, Theresa's way of comforting her son Ben is tell him that Daddy is going to fix it.  In the wake of learning what is happening with Wayward Pines, Theresa commands Ethan to fix it.


Abbies are on the loose and the arc is running out of food, yet Ethan has time to think about the fact that his old boss is back in town and would very much like to re-establish the relationship he had with Theresa while Ethan was still in stasis.  Yes, in the middle of all this action, yet another love triangle is introduced.  Why are these people even thinking about the nature of love at a time like this? Why?  Between Theresa complaining that she loves Ethan more than he loves her and Adam Hassler is completely devoted her.  Naturally, Theresa cannot go for the man who is so dedicated to her he put himself in stasis, she chooses Ethan preferring in the end to be the one who loves more. Yep, she's a wife, mother, subservient and willing to sacrifice everything for her man.

I wonder why Crouch felt that he kept needing to remind the reader exactly what kind character Pilcher is.  First, the murdering of his wife, the lying to the town, the surveillance, killing his own child along with others indiscriminately, and finally opening the gates for the Abbies.  The constant positioning of Pilcher just became heavy handed and unbelievable. If this town means everything to him, then why so easily destroy it?  As this series went on Pilcher moved from a character to card board cut out villain who might as well have been twirling a heavy black mustache. He might as well rang the dinner bell and told Ethan to come and get him because by the end, Pilcher is absolutely inept.

From start to finish the Wayward Pines series is racially erased. Courch didn't even bother to give Ethan a Black bff. There isn't even any reasonable explanation for the erasure.  In terms of GLBT inclusion, Crouch finally got around to including a character.  Bob was chosen by Pilcher the world but his husband was not.  Upon awaking in Wayward Pines Bob was forced to marry Barbara.  On the eve of their death, Bob finally admits his sexuality and finds understanding and solidarity.  Here's the issue, Bob is a throw away character.  Nothing about the story would have changed had his character not been included.

I could have lived with the rushing, violence and action of this book had it not ended the way it did.  I seriously stared at the last line saying, "wtf"?  If it had been a paper back, I might have thrown it across the room in disgust.  Wayward Pines is meant to be a trilogy, yet Crouch clearly left room to write a fourth book in this series.  I didn't feel any sense of closure at the ending and that's because it isn't an ending.  It's a bookmark just in case and that's a shitty way to treat readers. If you're thinking of starting this series, keep that in mind.