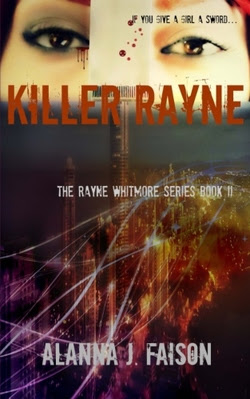 Rayne has passed through her trial by fire of the first book. She has been Unmade, her family has been destroyed and her first forays back into the world have not gone to plan

Now she prepares, she rallies her allies, her friends, she claims what is hers, she demands loyalty and lays down the foundations for the coming war.  Namen Young has destroyed her family, the lives of so many and is threatening to destroy everything – and Rayne is raising what she can to stop him.

This book is relatively slow paced – and certainly a lot slower than the last one. Its story is more an interval than a closed character arc without on particularly storyline or a real conclusion at the end so much as it is another chapter in Rayne’s ongoing saga. It absolutely cannot be read stand alone – as without the former book and the book which will come next it is completely lost without context or purpose

And all of this is a good thing. The first book was so incredibly fast, jumping from plot line to plot line to event to event so quickly that a slower paced book to consolidate was needed. As part of the series this book is excellent, it gives us time to catch our breath, remind ourselves of what is at stake and who the major players are in Rayne’s world and her battle against Namen. We’re reminded of the nature of the war and what all the powers are (since this world is so wide and varied with a lot of complex forces in play).

We ran through the world last book, introducing everything at a break neck pace but without really having the time to get to know anyone or look too far beneath except to know there was a lot beneath to know. Now we get to slow down and really look at things like the werewolf past, the nature of the witches, the relationships between the characters, the society of the vampires and look at the various motivations that drive everyone

It also really laid down how this fight was going to happen – not just as an epic battle of claws and swords and woo-woo powers (though that would certainly have a place) but also through proxies and by influence and generally by controlling mortal forces and supernatural allies. Ultimately, part of this conflict began – and certainly the reason it slaughtered Rayne’s family – out of fear that humanity were going to rise up and use their numbers and new technology to destroy the supernaturals. This not only affects Rayne through her business (and her father’s arms business targeting supernaturals) but also lays the foundation for what they want and looks at the balance between humanity as victims or a threat. Again, there’s a lot interesting topics and conflicts that are now being developed to make for a much richer story

I really like the relationship between Rayne and Selene, especially as it’s affected by Zara. It’s not perfect, things have not gone smoothly between Rayne and Selene. Selene has lied about her brother who is now working for Namen and is the big bad nasty – which is obviously a major thing to lie about and would put a strain on any relationship. At the same time Rayne’s reaction to the news was… intemperate and she has now formed a link with Zara that has become deeper and more intimate than either of them intended or wanted. Definitely not smooth

But I love how they react to this. We don’t have a big dramatic “you lied to me and now I will never ever trust you again, ever!” moment for horrendous amounts of big ugly angst but nor do we have them brushing over it as if these problems were nothing. They’re not nothing. They are major events and problems that definitely hurt them and have damaged their relationship – but both Selene and Rayne love each other enough and value their relationship enough to work through this while, at the same time, valuing themselves enough to not just ignore the issue.

This kind of mature outlook is one of the better aspects of this series. Jaxom is obviously furious with the events of the last book which did not go well for the pack – but isn’t going to scapegoat Rayne for it and they recognise they have a mutual goal together. Some members of the pack are (understandably) not thrilled but despite being in contention with Rayne a grudging respect builds between them.

This happens several times in the book. We have a collection of people who do have issues with each other. They have fought, they have hurt each other, they have reasons (both rational and otherwise) to hold grudges, they have strongly different opinions and ideas. Sometimes they’ve very suspicious of the other and their motives. And they work it out, or put it aside, or recognise that this difference doesn’t mean they can’t work together or recognise that just because they have an issue in contention doesn’t mean they don’t respect or value each other. Someone disagreeing with or being against Rayne, for example, isn’t automatically presented as a terribad person who should be shunned and punished for being so incredibly awful; they can disagree with Rayne for valid reasons and still be good people worthy of respect and alliance. That is sadly very rare and really good to see here.

This mature take on relationships means that Rayne can be surrounded by a number of powerful people – and a number of powerful women – without the typical Exceptional Woman tropes and these women also have their own goals and needs beyond Rayne. Selene loves Rayne, but she also loves her brother, has an involved history with him and a history as a witch and a high priestess. Zara is bonded to Rayne, cares for her – but also has a complete history as a powerful vampire and with a lost lover imprisoned by the immortals who is her definite priority. Tamara, Jun, Rebecca –all these women have their own lives, goals and priorities as well as Rayne’s respect

And, of course, most of these characters are POC – Rayne is Black, Selene Latina, Zara is Black, her lover, Sage is Asian, Jun is Middle Eastern – these are just a few of the majority POC cast – we have a very large number of POC through the cast and, again, each with their own stories and agendas and priorities and lives.

Of course Rayne, Selene, Zara and Sage are all lesbians with powerful, passionate love lives and a dedicated will to live them as they choose despite at times facing opposition. They don’t live in a magical homophobia-less world but nor do they live in a world where homophobia or lesbian-orientated storylines dominate. They’re lesbians, it isn’t the only thing that defines them but nor is it a tiny part of them. It’s part of their experience and stories but not the only part.

There are some issues I have with the story – I think there’s still an effort to sanitise what Rayne’s father did and make excuses for him. I also think Rayne’s attempts to gain control over the city are hamhanded and likely to backfire – and in a world where humans may grow to fear the supernatural, her using murder and threats to take over mortal authorities is going to feed into that. It felt clumsy like she resorted to plan c without considering plan A or B.

But other than that this is an excellent book and is taking the series in a very interesting direction with lots of epic, a hugely diverse cast and all of these characters with powerful stories and motivations of their own. Things are looking up!