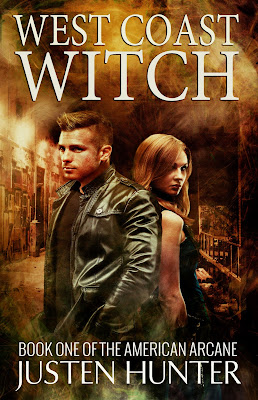 Eric’s life was pretty simple – he had his job as a bar tender and his books.

Until a vampire attacks him and an ex girlfriend of his goes missing and he meets Amy who introduces herself as his Guardian because of a pact with his family. Now he’s up to his eyeballs in vampire politics, werewolf gangs and so much more than he ever dreamed of

Above all the fact that he has magic – he’s a witch, one of the few left in the world, and a challenge, asset and threat to the other Arcane of San Francisco.

This is the first novel of a new series – which means as much as it is about telling a story it’s also about introducing a world and cast to convince us that we want to play in it – and I think this book has done a pretty decent job all round, albeit perhaps not a stellar job

The world is a good one – but not an especially original one. We have vampires in all their ancientness and werewolves in all their furriness with assorted shapeshifters around the periphery for funness. The characters themselves are interesting (the werewolf mob boss, the vampire club owner) and it’s all presented well with bonus extras that we don’t see a lot elsewhere – the undefined Guardians and the hinted at Red Angels with extra mystery brought by the fae

I think when these are developed – along with the whole near-extinction of the witches and their nature – have potential to throw in lots of new angles. I also think it’s probably a good idea not to overdevelop them at this stage so the book can spend more time focusing on introducing Eric, the protagonist. This means the world is decent, fun, interesting and also very very very very similar to a lot of worlds out there. That’s not inherently a bad thing – I liked those books, I like big worlds full of the supernatural, but until these extra elements are developed there’s little in the world to make it stand out in the genre.

The primary role of this book is to set up Eric, the protagonist – and I have mixed feelings about him

Eric has lived nearly his entire life without any real familiarity of the supernatural. Sure he’s aware that vampires and werewolves exist along with the rest of the population since they’ve recently had a Masquerade breaking a few years ago, but otherwise he’s quite clueless. Yet he doesn’t let that stop him leaping into the supernatural world head first without much in the way of hesitation. He often steps in things completely against the advice of his friend/mentor/guardian/totally-not-an-angel. He’s reckless, he’s foolish and if he weren’t the protagonist with a truly epic level of plot armour, he would be dead several times over.

I don’t know what frustrates me more, the lack of good decision making or the fact that his decisions nearly always work without any real consequences

Eric also trusts extremely easily – like Amy. Sure she saved his life but she won’t even tell him her last name, what exactly she is, what her relationship with his mother or his family is but has already declared herself to be his guardian and follows him around. And if he does trust her so much could he at least trust her enough to listen to her advice?! Like she tells him it’s very important he not let the world know he’s a witch and I don’t think the echoes of her warning have died before he’s told half of San Francisco.

He’s so blasé and careless – he falls in with the vampires (after going to see them. Alone. Against all advice. And still not getting eaten) and even starts dating Teresa - again against advice and just a few short days after being attacked by a vampire and describing the whole experience as traumatic and violating. In fact, Eric’s life changes a lot very quickly and becomes a lot more violent and messy but he rolls with it incredibly easily. Now, I’m no fan of drawn out angst, reading my past reviews will make that clear – but some reflection or pause would have helped a lot here.

What I really did like is how Eric addressed problems. He doesn’t seek out fights and he doesn’t try to win them by combat prowess – in fact he is basically surrounded by people who are a lot more dangerous in a fight than he is – especially Amy and Teresa. He tries to be the voice of reason and understanding, he criticises people for not being and he tries to bring opposing sides together to talk. He’s not a gun’s blazing action protagonist and does try reason, diplomacy and understanding to try and resolve things along with a nice, hefty dollop of empathy that really works. Despite his often working with the vampires he does his best not to pick a side and generally tries to be a decent (if not always sensible) person.

I don’t think I can really underscore this element of Eric’s character – he’s a nice guy (and note the lack of inverted commas there, he’s a genuinely decent bloke) doing his best. He’s not always sensible and he utterly fails at being devious or underhanded and all that combines to mean I generally like him even while having strong reservations about his decision making and response to emotional trauma/shock.

On women we have a bit of a victimisation and rescue meme going on. While Teresa and Amy are certainly more dangerous than Eric at this point, the whole motivation of this story is Eric deciding to involve himself in rescuing Sam, a woman he knew years ago at university (and there’s little reason why he wouldn’t trust the authorities to do it). Along the way he rescues Rebecca, another shapeshifter and Amy is also captured and in need of rescue. That’s a lot of rescuing of women to happen in one book by someone who hasn’t come close to gaining his power or a role that would put him in the position of professional rescuer.

I also feel that Amy didn’t get a lot of credit for what she did. Her whole persona was one of mystery along with Nick, the other Guardian. She is sworn to protect Eric for reasons unknown and ends up being dragged along with him to various risky conditions (against her advice) and often doing as much – or more – than Eric in those situations but Eric is generally considered the hero/primary actor/etc in those situations. There were times when I wanted her to turn round and smack him for volunteering them for things when she would likely be doing at least half of the legwork. There are some excellent moments when Eric challenges misogyny and some moments that edge towards paternalistic chivalry.

There are several POC in this book, with Teresa, a Brazillian woman and vampire (second in command of the vampires), being the most prominent. Other than her, though, we are looking at a lot of background police detectives (latino), his boss at the bar where he works (a Black man) and not much in the way of major characters that I remember. This book has no LGBT people at all – but draws on LGBT analogies for the supernatural (closeting language for example).

I’m intrigued, I’m interested and looking forward to the next book. It was generally well written with a protagonist who, despite some bad habits, was different enough and sympathetic enough to stand out to me as someone whose story I wanted to follow. The world is interesting, the writing good – all in all it’s a good book and a series I’m happy to add to my to read list, albeit not one that quite stands out in the crowd.