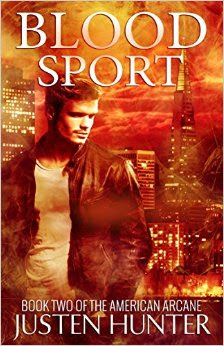 Eric, possibly the last witch in the world, has been promoted to the knight of the Bay. It’s his job to police the supernaturals of San Francisco and solve any problems that arise – it’s a new role for him and he’s definitely still finding his feet.

But vampires are dying – dying in ways that scream of black magic. Which means there’s a magical practitioner in town other than Eric, one who is working with demons and maybe neck deep in lethal vampire politics

I like Eric on many levels. I like that he’s a protagonist who doesn’t fall back to violence as a problem solver. I like that his first stop is reason and trying to make people co-operate. I also like that his power doesn’t really lend itself to violence – sure it’s growing and increasing, but ultimately he is surrounded by people (by women, no less, who are considerably more violently powerful than him). His magic is more useful than dangerous. He carries a gun but is no marksman, he has some magical tricks but they’re costly and difficult and even Serena, his new sidekick, comments on how bad he is at fighting. He is a normal guy discovering a new world and new abilities and, no, that doesn’t come with the full skill set to cope with that

What I’m not fan of is his naivety. He doesn’t see any problem with telling all the vulnerabilities of supernaturals to the police even as Teresa protests (which has an extra level of dubious when you consider that Eric is a straight white guy and Teresa is a POC woman who is asking him to be more careful about the police), sure that the police are the good guys and there’s nothing that could go wrong. He tells the whole world that he is a witch – seriously, because of him just about everyone now thinks witches are about and he is a witch when before him everyone thought witches were extinct – again in the face of endless warnings. He trusts Amy implicitly and, yes he certainly has reason for that, but he still knows nothing about her, what she is, her history or even her last name. Worse, he trusts Nick and is even willing to go with him to another world, merely because the guy said it was important and with a similar lack of information.

It’s not even his naivety, per se. A naïve character who wakes up to the reality of the world isn’t a bad thing. But he doesn’t. His trust never comes back to bite him in the arse, his trust is never unfounded, his rose tinted glasses are not really pulled away. It’s almost stretching my plausibility meters – like Serena. Serena has a lot of potential to be a good character, I’m curious how she develops. But “develops” is the word. He shouldn’t be taking a brand new vampire and a complete stranger to crime scenes and deputising her as his chief assistant. How can he trust her with all this information, he’s known her for a few hours?! This should blow up in his face. Someone should protest – but no-one does. It’s a form of very clumsy plot armour.

It’s not just his naivety – things just tend to be far too easy in this book. Serena has been horrendously kidnapped and attacked by a vampire, turned… and she seems to get over it pretty well. She transitions to vampiredom quite easily, she controls her hunger with minimal difficulty. Any trauma she felt from being kidnapped and abused doesn’t seem to have any real lasting impressions on her. Eric is dragged to the other world full of fae and has minimal culture shock – he just kind of deals with it with minimum difficulty.

This easiness does mean we skip out on a lot of the usual clichés - he works with the police who aren’t instantly suspicious. He’s in touch with the other supernatural organisations in the city and generally gets on moderately well with all of them. Yes, it’s easy but it also works because there is often a lot of contrived conflict in these supernatural worlds with groups squabbling like children when they’re supposed to be ancient powerful beings – I like that.

I continue to like the world – it’s nicely balanced with adding more information without overwhelming me. The other world, the fae, the different supernatural groups and the politics and how the world is developed is all really well presented. It’s that balance that matters – we have a rich world but we don’t need to see the whole world at once. I feel I have exactly as much information as I need without anything getting in the way of the general plot

Which is again, also balanced. Fast paced action with multiple plotlines running alongside each other – with the fae storyline with Nick running with the murder investigation and the vampire politics (again, all showing more of the world without being overwhelming). The story never lost me, get the pace flowing and, even with his naivety, I liked Eric and how he fit into it all. It was a definite fun read

It was also a very racially diverse read. Serena, the new vampire and, in future, Eric’s new partner is a Black woman and constantly involved and pretty damn good at what she does. Teresa, Eric’s vampire girlfriend is a mixed race WOC from Brazil. The two seconds in command of the vampires of San Franciso are both POC – one a Japanese woman, one a Latino man. Eric’s main police contact is latino, Dumont, an information broker is a Black man. So many of the main characters in this book are POC – but so are a lot of the background or briefly appearing characters. Serena’s first feeding was with a Black man, a police detective who has taken a dislike to Eric is Asian. There are just POC at every stage and in every venue in this book.

A number of them are also women – including Teresa, Serena and Amy who are the biggest characters in this book after Eric himself. They’re all stronger than him and more dangerous than him. We also have his magical contact who is a woman, the police chief is a Black woman, and the main authorities of the vampires are split between men and women. There are also excellent moments like Serena outright refusing to let Eric shelter her. I also love one scene with Amy towards the end of the book where they re-evaluate their relationship and the oath that Amy took, emphasising agency and choice. There are a lot of excellent moments like that which are nice challenges.

There are, sadly, still no LGBT characters (and, yes, this book is set in San Francisco). We do have some nice development of Eric and Teresa – while this book is generally not great at analysing people’s reaction to trauma, the fact Eric was attacked by a vampire has left him wary of having sex with Teresa. She is wonderfully patient and they both understand and respect this is a trigger Eric has to work through before they go any further.

This series continues to be well written, nicely paced and immense fun. I really look forward to the next book where this cast of intriguing characters continue their exploration of this fun world with its many original elements and all with more nuance than the “shoot it until it’s dead” MO we see so often. With developing meta-plot, this really promises to be a fun series – it just needs to be a little more complex, have a little more cynicism dropped in it to stop it losing me in places.