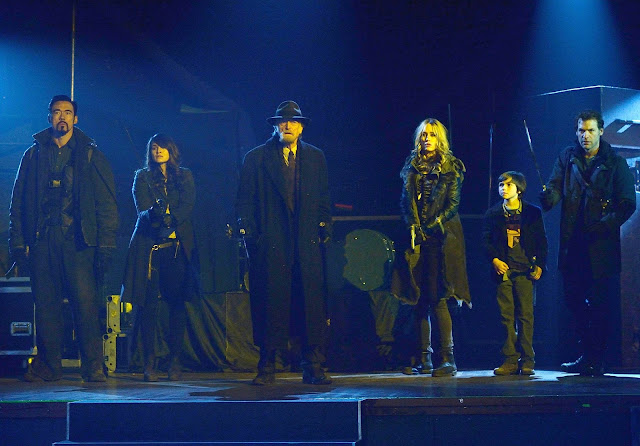 Opening flashback – 1932 Romania with a young Abraham being told a story by his grandmother, the story of how the Master gained his huge body – by hunting down and transferring his vampirism and soul into a man with gigantism, his vampiric nature removing the frailties of the condition (the whole process is monumentally disgusting). As a bonus, Yusuf Sardu, the giant man who was infected carried the sword cane that Abraham now carries.

In modern day Manhattan Abraham remembers his failure to kill the Master despite it being broad daylight to ensure we remember the last season. He’s hunting where the Master fell and went to ground despite being tired and out of breath himself. There he is found and captured by the Hunter Vamp who Hunts Vampires.

Abraham is introduce to Gus (Hunter Vampire has no time for their bickering). Hunter Vamp takes them to where the 6 Ancients are all kind of nailed up to their pedestals, asleep but understanding. Hunter Vamp, Quinlan, speaks for them and tells them The Master is the seventh Ancient. He’s normally hidden from the other six though – and those Six want to ally with Abraham to kill the Master (though not teach him how to kill an Ancient, for obvious reasons). Abraham decides it’s time to talk about literature – wanting to know if a book called the Occio Lumen exists. This is apparently important.

The deal is Abraham lives if he can find the Master and inform them. Then they are told to leave before the Ancient’s wake looking for food: and a man is dragged in to be lunch. Which is pretty brutal.

Meanwhile we have an overpass of New York with lots of fires, alarms, sirens and gun fire which I think indicates the growing dystopia. Vasily is busy vampire proofing their base while Ephraim feels the need to remind us the Master isn’t dead and how wrong Abraham was. Because Ephraim still needs to be eaten. It seems a pretty clear attempt to, yet again, push Abraham out of the leader’s seat

Vasily has his own plan – he will secure his base. Then secure a little wider area, then wider still – slowly claiming more and more safe land. Dutch doesn’t like Ephraim any more than I do and gives him snarky attitude he richly deserves for assuming she’ll babysit Zach, his kid. Ephraim and Nora head out

They head to a pathology lab, planning to set up there with all the nifty equipment though they have tokill a few vamps first. Nora still feels sad for the victims. They’ve set up shop to figure out a medical solution to the vampire plague. This involves Nora applying science and brainstorming and Ephraim drinking too much and pointing out how wrong all her ideas are (she’s right, but he’s awful about it because he’s an awful person who should be eaten). He’s also defensive about his drinking despite Nora not objecting – it’s not her job to police the manchild who should be eaten.

Abraham returns just before Vasily decides to go out looking for him after night time. Vasily tries to scold the old man for making him worry but this is Abraham. Vasily the demands he eats and is worried at Abraham’s lack of growling. Abraham has another plan – for them both to grab something from his storage locker – Vasily is relieved Abraham has a plan and tries to reassure him.

Ephraim decides to try and parent his son over his vampiric evil mother. It doesn’t go well and I still don’t really care. Ephraim turns back to drinking, this time with Dutch who is tinkering. During their verbal sparring she seems to give him an idea

Dutch does a better of connecting with Zach

He wants to create a plague to kill the vampires – unleashing a vast scale biological weapon.

They all go to a trip to Abraham’s storage locker (Ephraim is arsehole about it, of course) and in between finding some refugees hiding in the storage centre they also find Abraham’s stash of weapons and research. The power then goes off ominously and vampires appear – fighting retreat (PLEASE SOMETHING KILL EPHRAIM). They fight and escape but both refugees are bitten, scratched… Vasily prepares to kill them but Ephraim wants to keep them for his virus research. Alas, Ephraim is not bitten.

The Master isn’t in the best shape having been badly burned by the sun. He tells his Nazi minion Eichorst that his body is dying. Which means he needs to prepare – preparations which require Bolivar (one of the first vampire minions) to fetch “the loam” (possibly the soil he used to transfer his body) and Eichorst to fetch some kids. That’s never a good thing.

Eichorst goes into a meeting with Palmer who is far far too cocky for a human minion with a little power in his veins. He still thinks of himself as an equal partner with The Master. Sniping aside they meet with broker Coco Marchand to discuss a property deal – one that involves a building capable of moving lots of liquid, which is ominous.

Now back to the whole “kids” thing – at a school for the blind, the whole population of kids are being put on busses ostensibly to leave the city – at the command of Palmer.

Ominously they’re collected and taken to Palmer – and all of them are turned into vampires. Eichorst collects Kelly (Ephraim’s ex-wife, Zack’s mother) and makes her a vampire that than think and talk (like Eichorst), unlike most of The Master’s creations. She is to lead the newly blind vampires who have special vampire 6th sense.

Palmer also increases his PR by offering a vast amount of credit for the city to help them come what may. He also learns he has managed to buy his property with the help of Marchand with lots of almost-flirting but certainly more humanising dialogue. He also offers her a job – and gives her an offer she can’t refuse.

I kind of love Vasily being mother-hen to Abraham. He manages to hit the balance – he clearly respects Abraham’s skills and leadership so in no way is his care depicted as condescending or belittling. He also pulls off being both the big tough manly-man, best fighter and most dangerous and practical man among the group with worrying that Abraham hasn’t eaten and hasn’t called to stop him worrying – it’s a nice subversion of some pretty strong gender tropes there.

I still hate Ephraim. Can something eat him now? I also find his little family drama to be somewhat contrived on the show – when fighting to save the whole human race, do we really care that much about what a crappy parent he is and the angst in their little dynamic? It’s not like it’s necessary to make him a more compelling or human character.

I actually find Palmer and Marchand somewhat interesting. She clearly knows to get in big with such a major contact while the normally so business-like Palmer seems to be enjoying a new lease of life. His comment to Marchand about never having been to a baseball game points to a very sheltered, restricted life due to life-long ill-health… and now he seems to be much more enthused about life and ready to enjoy it more – even if it’s so simple as conversation and discussing his ties (or even flirting).

I'm leery of the psychic-blind-mindless vampires. The blind person with super-sight is something of a trope and this one isn't even empowering - they're Kelly's mindless minions