A Gentleman of Means (Magnificent Devices #8) by Shelley Adina 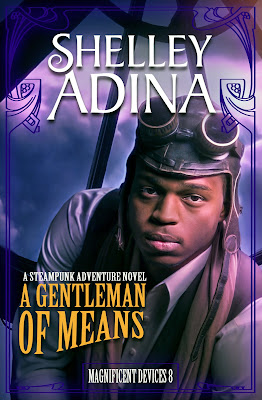 Claire is settling into life as an Engineer for Count Von Zepplin and planning for marriage to Andrew
(or avoiding planning) though neither is going quite so ideally or quite so well as she would have hoped. But still, is she really willing to abandon her career, this opportunity and even the man she loves for the sake of a friend who, it has to be said, she doesn’t know that well

Gloria Astor-Merriweather has been kidnaped – but is Claire willing to throw everything away to get her back?

I love Gloria. Not so much her character (which is still very good) but the whole concept of her. Gloria Merriweather-Astor was introduced as a very opposite to Claire. While Claire was newly desperately impoverished. Claire was academic and scientific, Gloria was more interested and fashion, society et al. And Gloria is the daughter of her arch-enemy and the major antagonist in the series.

In any other book, Gloria would be evil. She would be the spiteful, vapid mean girl who we were supposed to hate and loathe from the very beginning. She could so easily have been a hollow demonised character.

But she isn’t – she’s clever and moral and capable. She has her own life and her own problems even though her context and experience is very different from Claire’s – and she’s a very loyal and caring friend who regrets deeply any idea that she may have failed Claire in the last book. Even more than her own freedom she worries that Claire may think she abandoned her -  even if they’re not such close friends, it mattered to her that she was thought of hat way (of course, Claire, marvellously free of the girl-hate that is so annoyingly pervasive, doesn’t assume any such thing. Having experienced Gloria’s kindness she assumes far more kinder interpretations of her behaviour).

So, even though I risk sounding like a broken record, I have to repeat how excellent this series is with the female characters. Not just because they’re good and capable and interesting but because they’re also different. They have commonalities in different ways (Claire and Alice share an interest and talent for Engineering, Gloria and Claire attended the same school, Liz and Maggie are sisters) but they’re all still very different people.

The plot itself wasn’t especially unique – we have another rescue mission as our heroes ride to the rescue with cunning, cleverness, a whole lot of courage and daring and ingenuity and a great deal of determination. It’s not especially new, but it is great fun, well written, nicely paced and any outing with these characters will make me smile.

I’m more intrigued with where the story will go from here given the way the plot developed. We have a big confrontation with the big bad who has dogged the series for so long (that big bad was also surprisingly humanised) which will now put the series in a very different position going forward

There was also Claire’s confrontations with both her fiancé Andrew and her employer, the Count Von Zeppling (which I will come back to since there are elements there I don’t like a great deal) which have put Claire in an interesting position of questioning her priorities and where she actually wants to go in life and how she wants to live.  Even while looking to the future with these elements, I liked the call back to the very early books, back when she was the Lady of Devices running her little rag-tag band of followers in a squat in the poor part of London. It was nice to be reminded of where Claire came from, what she has achieved and where everyone else still is.

There was also a nice look at Tigg who, in many ways, has come at least as far as Claire. He has grown, he has a future, a plan and a life and, like Claire, also has a nice look into his past in the form of his estranged father. It’s a nice look at Tigg’s character, his development and his own opinions, especialy with scenes from his own point of view, but I do think the references to his father’s skin colour (Tigg’s father is Black and his mother White) overly emphasised how dark and scary he was.

Now I’ve got to do the bit I try to avoid and the fanpoodles (or fanchickens in this case) are demanding I silence - I have criticisms.

This book opens with Claire faced with hard choices and hard criticisms which make her very sad and very frustrated. They put her in a very difficult positon and require her to look at herself, her life and decide exactly what kind of person she is, where she should draw the lines and how she should go forward in her life…

Like the idea that she has to start at the bottom in Von Zepplin’s lab/factory… well, yes? She’s newly qualified? Isn’t that how it’s supposed to go? I don’t know if this was to try and point out the sexism of her superiors in the company being condescending to her… but I don’t think it carried that. It came off as a brand new employee deciding she was the bestest thing ever and demand to be catered to as someone special.

Or Andrew’s objection to Claire running off to the rescue again? His objections are reasonable – she does keep putting her life – their lives – on hold for the latest adventure. And in this case there really is no reason why she shouldn’t leave it to the necessary authorities or Gloria’s extremely rich and powerful father. She has no good reason why she should ride to the rescue – and that kind of needed addressing.

And these could be reasonable flaws. After all, Claire has achieved some amazing things over these books, often in the face of men who have been condescending and belittling and tried to keep her in a box. It would be reasonable for her to automatically push back at men trying to limit her. It would even be reasonable for her to be, well, a tad arrogant. Doesn’t she have cause to be? She’s more than capable of rescuing every casual acquaintance she’s ever met from even the most disastrous of peril up to and including a Falling Skies marathon (peril indeed). She could probably run the zeppelin works far better than her bosses. So, arrogance would be a reasonable character trait which she could learn and grow from. Knee-jerk resistance of any male constraint, no matter how reasonable, would also be an understandable character trait.

But if they were then they’d be addressed – but both conflicts just seem to fizzle. Andrew and Claire reconcile – and it’s beautiful and touching and powerful, but doesn’t even remotely address his original complaint. He established that he cannot live without her and loves her a great deal but there’s no addressing her actions that are constantly causing him distress (reasonably so). Similarly she seems to make her peace with Count Von Zeppelin without really analysing the underlying issue – if this is a character trait of Claire’s then I would like to have seen it addressed. Even more analysis of Claire simply saying that she doesn’t like working in a hierarchy (a reasonable understanding given how much she’s used to living her own life and being in command) could have done with more analysis and development.

Of course, to some degree this could all change depending on how this develops. After all, this story is in a very different place and Claire is almost in limbo. We ended almost with Claire’s slate being wiped clean – she could now go in any direction, she has few ties on her which opens up the story a lot. Which includes a potential to develop these elements.

And hopefully, maybe, eventually introduce some LGBT characters. There was, though, a very good depiction of PTSD with two of the characters of the previous book who suffered so much there. It was a nice reflection that such trauma does hurt people and how they do not always recover quickly or easily. There’s a lot of nice conflict with their own guilt, shame and denial over their symptoms as well.

In all, despite some issues, this is another excellent book in this series that inspires fanchickening! More, because of where it ended we could be going in a whole new direction with Claire and I can’t wait to run along with her for the ride, loving every last minute of it