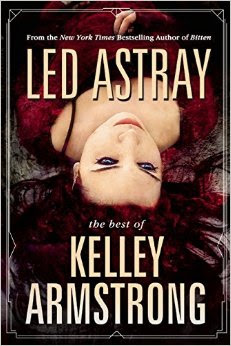 This is a collection of short stories by Kelley Armstrong, drawing upon her various worlds as well as several stand alones.

There are a lot of stories that draw from Kelley Armstrong’s various world series – and some of these I haven’t read. For me this was particularly a problem for the short stories based on the Cainsville series since I hadn’t read them. In some ways I think the order of the stories was off, if Devil May Care had come first rather than last, the world would have been much more explained and developed and, with that, I would have had more investment and understanding when reading The Screams of Dragons, Gabriel’s Gargoyles and The Hunt. But, if I had read Devil May Care       first, I don’t think the same sense of mystery and alienness would have pervaded these books.

Thematically and in terms of tone all of these are very good at invoke the other, the very otherworldy feel of the fae but all with a strong sense of subtlety. They are unseen and mysterious and it’s all a lot of look-out-the-corner-of-your-eye-or-you’ll miss it etherealness that really real worked. They were creepy, they were low key, they were subtle and they were about normal or seemingly normal people caught up in this mysterious place with its mysterious people who are just ever-so-slightly off. I think that wouldn’t have carried the same weight if I’d read Devil May Care first even though I enjoyed it more, since that book is very up front and clear about what Cainsville is and why. It would have destroyed the mystery and the eeriness. I do think I am missing out a lot by not recognising any of these characters and not appreciating any new angles it my bring

I also haven’t reads the Darkes Powers/Darkness Rising universe and I’m now both eager to read them and quite frustrated by having read this first.  Kat and Branded both seem to take familiar themes from The Otherworld universe but the world building goes in a very different direction – with the same supernatural creatures I know so well eventually leading to a complex and rich dystopia. In Kat we see the beginnings of this and Branded takes the extreme several years, perhaps centuries, afterwards. I’m a little frustrated in fact because I think I’d love to read this series but now I know where it’s heading I think I will miss much of the suspense of the characters facing the pending dystopia. I loved both stories not just for the world setting but also for the characters with Kat we saw strong female friendships, family and dedication and Branded showed a level of cunning and ruthlessness from a female protagonist that was absolutely applause worthy. It’s a terrible, dark, lethal world – and she does what she must to survive and thrive in excellent, terrifying fashion.

The main reason I was interested in this book was for those stories set in the Otherworld universe – I’ve read them all, I love this series and miss it now it was over, so it was nice to hark back to it. Though I have to say, in some ways, they clashed badly with the other stories in this book. The other stories have desperate, abused children, alien, cruel and downright creepy fae, several brutal dystopias and some downright disturbing standalones. Then we have the Otherworld stories which are a bit silly and great fun. I like them, but they’re theme bombs and derail the overall feel of the book

Learning Curve and The List are told from Zoe’s point of view. I’ve always liked Zoe, firstly for being an Asian lesbian vampire in a series that needed more POC and LGBT people, but also because she had so much fun. She’s ideal for short stories because so many of the other Otherworld characters are involved in such epicness all the time while she never has been. This is her life and the enjoyment she gets out of it – whether it’s having an amazingly fun time educating a terrible Britanny the inept vampire slayer or tackling some vampire-wannabes, she has a good time and I love her stories.

Another excellent one from the Otherworld Series was Bamboozled going back to werewolves of the old west with an excellent female protagonist. It was a great display of portraying prejudice, the misogyny of the time and the contempt against her as an actress while at the same time challenging it marvellously. It also works well at challenging the single-special-woman syndrome that has plagued some of the Otherworld Series (yes, cryptic for spoilers).

I was as big a lover of the zombie, brothel werewolf story with Nick and the young wolves in VPlates. Partly because it reminds me how frustrated I am that this series ended and I’ll never get to see this rebuilt pack. Seeing Nick who has both grown a lot but is still not-all-that wise (hence taking new werewolves to a brothel to lose their virginity) but is trying. The whole story could have been terrible, but in it way it nicely shredded the ineptitude of the extremely male-dominated, uber-masculine, sex-driven, testosterone world of the werewolves and, even without zombies, how it was all a little silly and wrong headed, which was definitely needed.

Next to them I didn’t think over much of Young Bloods it seemed kind of obvious and clichéd – young vampires bite off more than they can chew. Life Sentence was curious in that it was the only one of the Otherworld stories of this book that returned to the creepy theme of horror with interesting twists and utterly terrible, terrifying endings. I liked it because of that and because the horror of it was perfect but since it was set in the Otherworld series but didn’t really connect to any of the characters from that world it didn’t resonate with me

While I loved the Otherworld series, I actually think the gems of this book are the stand alones. These were some the creepiest, twistiest, unexpected short stories all with a very dark edge that I’ve read in a long time. There’s a lot of tragedy, a lot of terrible things and a whole lot of new perspectives that made me truly love them. All the twists also makes it very hard for me to talk about them without spoilers so vagueness ahoy!

Some of them are very simple – Dead Flowers by the Roadside is as very simple narrative, but it doesn’t make this story of grief or loss any more devastatingly sad. Plan B comes at the over end of the spectrum, a multi-sided bisexual murder plot between a whole lot of terrible people which shouldn’t be nearly as much fun to read. Dead To Me is a story I still don’t entirely understand but I don’t think I need to – because even without fully understanding the sheer horror of it is intense. A Haunted House of Her Own has an excellent twist I can’t spoil but is so immensely creepy I was on edge the entire time I was reading it – it’s rare to have a book have the same sense of suspense as a good ghost film. Last Stand takes on the traditional zombie apocalypse and turns it awesomely on its head with extra ethical and moral dilemmas of civilians forced into intense military roles and forced to make terrible choices for survival.

I really liked Rakshasi with its innovative concept, drawing on Indian mythology and creating, again, a very edgy story with not-exactly-good characters still doing what they can. With the lure of freedom driving the character to do terrible things and some very nice conversations about the nice euphemisms we use to pretend we’re not doing what we’re doing (I really liked how different generations of her controllers used different terminologies to distance themselves from, effectively, enslaving her). The Door is another dystopia and so beautifully tragic as subsequent family members take up the responsibility of helping them survive – and preserving the innocence of the others, until each one must step in the role and there’s no innocence left. Suffer the Children was another dark, edgy story of grief and tragedy and, again, the terrible things people are driven to, even when they know they are wrong, for the sake of those they love. Harbinger continued the edginess and the darkness with a horrible omen of rape and murder – averted because of the warning and a terrible, tragic (but subtly foreshadowed) twist at end. The standalones are the most powerful of the stories in this book – and the ones that impressed me the most, and I generally don’t care for short stories, especially ones disconnected from a greater series.

I have to say that this book isn’t an easy read. It contains stories containing child abuse, rape, suicide and lots of terrible grief and tragedy. It’s not an easy read, but it is a powerful one which is truly excellently written. I can’t emphasise this enough, the writing is excellent and the emotional impact of the stories because of that is, at times, gut wrenching. Coming from the Otherworld series I never expected something so dark or a book that would throw in so many emotional gut punches – but I have to say I’m impressed, deeply impressed by almost every story in this book.