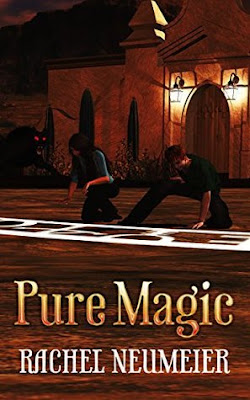 While Natividad and her family have found security with Dimilioc and managed to defeat the Black Dog that tore their family apart and killed their parents, they are not safe

The world has changed – in the aftermath of the war with the vampires, Dimilioc is left weakened and surrounded by enemies. Her sanctuary is far from secure and the werewolves are beset on all sides: vampires, rogue Black Dogs and even a suspicious human government all

And it’s into this difficult world that Justin enters – Pure but with no knowledge of the supernatural world he’s part of and he’s not sure what to think of the savage monsters who are “offering” protection… whether he want it or not.

I do love this world setting. The whole concept of the vampires and the war with the werewolves is one that has been done before – but there are many more unique elements to it. The idea that vampires and their mind control managed to hide the supernatural – and with them dead and almost extinct that removes this “Miasma” and exposes all supernatural to humanity. The war against vampires quickly became a war between humans and Black Dogs as the more brutal and savage Black Dog organisations found themselves hunted down as the vampires were

Which leaves the Dimilioc, who value the Pure and try to behave in a civilised fashion without leaving a trail of bodies behind in a difficult position attacked from several sides: the remaining vampires still plot, they’re very understrength after the war, Black Dogs driven out from other countries trying to wipe them out are looking to carve their own territory out of Dimilioc line and, on top of that, the awkward and tentative peace with the human government and a population that is primed to fight after destroying the vampires who are not exactly on the Dimilioc’s side.

This whole, complex world is told excellently through the story. We get to address all of these and make them all work into the story without the story feeling overstuffed or with too many crowded elements which is a challenge in and of itself

At the same time it manages to be a very personal story of Natividad and Justin which is also excellent since both of them shows this world from very different angels. Natividad has always been very much in the supernatural community, even when hiding from it – which gives her a clear view on the world, vampires and Dimilioc. While Justin has lived his entire life as a human so has much less rose-tinted glasses (and much more ignorant view point) to look upon the monstrous Black Dogs. Together they bring a complete picture of the world.

This also really delves into the power of the Pure, their magic, their skills and their role in the world, Black Dog culture and the war against vampires.

I can’t emphasise enough how much is packed into this story – world building, character development, personal stories and so much more. But none of it FEELS full. The book isn’t super-long. It doesn’t feel distracted or overwhelmed or slow – there’s a lot there and I get all this experience and knowledge but don’t feel bombarded. It’s really well written

One thing that hasn’t improved is Natividad’s decision making. Aie aie aie, Natividad if you keep this up we’re going to have to rename the Clary award. I like this character, I want to like her more but my gods if she is not just the poster child for Spunky Agency!

Like most classic Spunky Agency, Natividad is an excellent challenge to the dictatorial commands of the pack leader, Grayson. It’s clear throughout the book and the series that you do what the pack leader says Or Else. I’m not actually sure what “or else” means because while he’s certainly arrogant and unwilling to accept any challenge, Grayson isn’t unreasonable. However, Natividad recognises that, as a Pure, all of that “Or Else” pretty much doesn’t apply to her – and it’s quite refreshing to see the oh-so-common alpha male werewolf commander being questioned and openly ignored by a woman while everyone else must leap to obey.

Except she is a bloody fool. Her actions not only put her at risk and are clearly not thought through but she clearly, manipulatively and arrogantly tries to force several others to fit her plan as well – putting them and the entire besieged Dimilioc at risk in the process. I cannot imagine anyone would think her plan was a good one –or wouldn’t be horrified at the idea of her basically putting herself and Justin at risk (without telling him) and sabotaging two separate missions so she could do things her way.

A frustrating element of this is that Grayson does tend to wrap Natividad in cotton wool for her own protection which I would like to challenge – not using her pure magic to face a vampire (when the Pure are practically vampire Kryptonite) is overly cautious. Refusing to let her explore her own magic is a little patronising (though we have to remember how young Natividad is) – but the challenge is so inept it makes a powerful case for Natividad basically sitting down, shutting up and doing as she’s told.

Of course, no-one in the book, even Natividad, thinks she was right to do this by the end of the book – but I hope in future books we can see agency that isn’t linked to mind-numbing foolishness.

I think the introduction of Justin and the greater prominence of Keziah has helped push back the gender roles of this series. Before there was a pretty strong gender divide – the Pure (gentle, kind, defensive, sweet and spreading sweetness and light everywhere – no, really, even people near the Pure are nicer) were largely female while the Black Dogs (dangerous, violent, angry, physically overwhelmingly dangerous) were predominantly female. So a prominent male Pure and a prominent female Black Dog really works well, especially as both are humanised, are more than just avatars of their natures, both have histories, personalities, goals and doubts. Both are very much out of their element – because Justin has never lived among the supernatural and Keziah is still an outsider among the Dimilioc since she is from a foreign wolf pack (from Saudi Arabia). They are both powerful, skilful and have some unique abilities but nor are they especially exceptional or rare – or rather they are surrounded by other exceptionally people which means they’re not presented as the super-special-super-rare-only-female-blackdog/male-pure. Whatever unique, powerful elements they have, Ezekiel or Natividad also have or have other unique elements to match.

I also like that Keziah being humanised takes away a lot of Natividad being the only woman surrounded by men, except for the one other woman who she utterly loathes. She’s not exactly the biggest fan of Keziah, but they have found a level of mutual respect and Keziah is more than the beautiful enemy of the protagonist which is an excellent step up.

I am very uncomfortable with the relationship between Natividad and Ezekiel – I need to know how old Ezekiel is in his pursuit of a sexual relationship with a girl who is not yet 16…. Especially with the whole Pack being quite happy that this is going to happen.

This book does also look at how the supernatural affects different counties – which is refreshing in a genre which tends to be very limited to just a western, or even an American context. It’s not perfect – I think there’s an attempt to put various global problems through a lens of vampires and vicious Black dog manipulations which has countries like Mexico being corrupted by vampires and Saudi Arabia being dominated by viciously cruel Black dogs… while the US, of course, has the enlightened and wise Dimilioc wolves. To counter, other countries: France, Lebanon and Morocco are mentioned having as having civilised Black Dog families.

This book has a huge number of POC in prominent roles. Natividad and her brothers, Alejandro and Miguel are all from Mexico – and their language, food and expressions reflect this. It’s more than just a label to them and both Natividad and Alejandro often drop into Spanish where they both are much more comfortable and it isn’t convoluted or forced, it’s the natural actions of people reverting to their first language. Keziah is from Saudi Arabia as is her sister Amira. There’s also a Black family with a much smaller role among the Dimilioc wolves as well as several POC representing the government agency that is creeping into the storyline and likely to feature further in the series.

Unfortunately, despite a large cast, there are no LGBT characters in this book.

This series is really growing on me. In a genre that is so huge, any series which is unique is something I love. It has a large amount of racial minorities in the book with that being very well presented. They have a fascinating world with many many layers of conflict and story and avenues for growth. Despite Natividad’s decision making, I love her as a character – and she, her family, Grayson and Justin all have huge potential as characters (less so Ezekiel). This is an excellent werewolf story that stands out from many cookie-cutter stories and I cannot wait to read the next book.