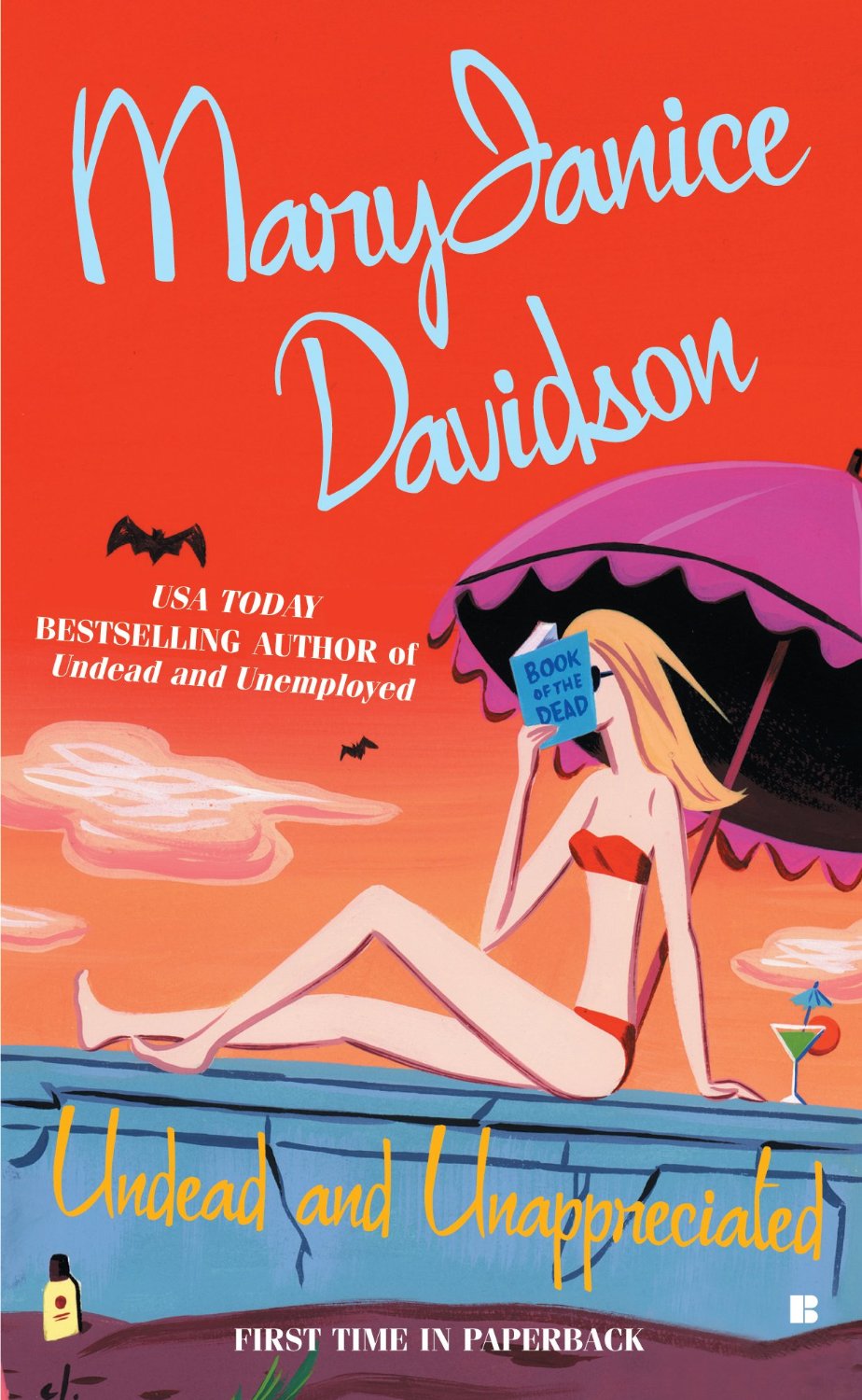 Betsy has not taken well to learning that not only is she a vampire but the queen of the vampires. Sure, her mother and her best friend adjusted to the change amazingly but even with that support, Betsy cannot seem to stay out of trouble.  When Betsy learns that she has a half sister, she is drawn to investigate. Just like everything else in Betsy's life, nothing runs smoothly.  In between dealing with a strike at her vampire club Scratch, and dealing with a hurt Eric, Betsy now has to keep a close eye on her sister because she is the child of the devil and destined to the rule the world.

I know from the introduction, it seemed that a lot happened in this book but that is certainly not the case.  Only in the most generous description can Undead and Unappreciated be called a filler and I say that because the entire series is absolute mindless fluff.  It begins with Betsy going to AA and pretending to be an alcoholic in order to deal with her need to drink blood. Look, I know that for a lot of people vampirism is a metaphor for addiction but to be clear, it's a horrible analogy. So, Davidson has Betsy do this horrible thing and it goes absolutely nowhere.  It's nothing but a launching pad for Mark to tell Betsy that he is a recovering addict and for her to temporarily beat herself up for not knowing such an essential detail about a man she calls a friend before going back to obsessing about shoes and Eric's control issues.

Betsy goes all evil vampire Queen when she finally gets around to reading the Vampire bible.  It only took her two books to get around it and naturally she decides to barricade herself in a room with it, ignoring the advice to read it sparingly because it causes mental illness. Also, can I get a side eye on the whole woo woo causing mental illness? In Betsy's supposedly mentally ill state, she attacks Jessica, calls Marc a leech, has sex with Eric and tries to kill Tina. When Betsy gets back to herself she has a mess to clean up.  Though Jessica isolates herself for a few days, she is quick to forgive Betsy and Tina and Marc follow suit.  Betsy is briefly able to go outside during the day but beyond that, nothing much happens.

Then there's Betsy's kid sister Laura.  Betsy's father lets slip that Ant has been pregnant before and gave the child up for adoption.  When Besty learns that Laura's mother is actually the devil and that Laura is destined to rule the world, Betsy is in with both feet temporarily and I say temporarily because Betsy gets over the whole hell spawn thing pretty quickly and starts to angst over her fear that Eric is into her kid sister.  Betsy has amazing priorities doesn't she?  Even when she meets the devil, she considers selling her soul for a pair of shoes.  The Devil/Laura storyline goes absolutely nowhere.  When I said that nothing happens in this book, I absolutely mean it.


Undead and Unappreciated wouldn't be a MaryJanice Davidson book without loads of problematic language.  Betsy is still obsessed with Gone With The Wind and each time it's mentioned my skin absolutely crawls.  Marc is Betsy's gay BFF, who at this point is single with no chance of a relationship and seems to have nothing to do with his spare time other than to be in Betsy's corner.  We did learn that Marc is a recovering alcoholic in this book and Betsy did actually notice that she has not taken the time to learn anything substantial about Marc. Yes, that's progress for Betsy but it does nothing to make Marc less of a servant.  Then there's Jessica, Betsy's Black BFF.  Yes this woman has a collection of marginalized servants.  Jessica seems to exist to serve Betsy and beyond being there to advise Betsy on her love life and pay the bills, Jessica has no real purpose in the story.  For much of this series this far, Jessica's race serves as comic relief.  Yep, Blackness as comic relief, feel free to roll your eyes.

My father turned his back on Jess but said nothing.  She was black, which meant he had a hard time taking her seriously: but she was also the richest woman in the state, so he couldn't afford to totally blow her off. It was a tricky balancing at, one he usually fucked up.  (pg 128-129)

It makes sense to me that Jess experiences racism as a Black woman in North America but what doesn't make sense is that MaryJanice Davidson seems to want to employ racism for shits and giggles, all while acting like the whole thing is so damn progressive.

If that were not enough, Davidson includes a conversation between Jessica and Marc that nearly had me wanting to throw my tablet across the room.

"It's just a word," Marc was insisting. Oh, not this again. Jessica hated "African American," but she wasn't too crazy about the N word either.  "It's lost all meaning.  This isn't the nineteenth century. Or even the twentieth."

"I don't think we should be talking about this," Tina said, shifting so Marc's elbow wasn't on her eyebrows.  She was teeny, but it was a tight fit back there.

"Of course it's fine, we're all adults.  Tina, I swear, you're the most politically correct dead person I've ever known."

"I just don't think this is an appropriate discussion for - for us." Tina had been born around the time Lincoln freed the slaves, so she has perspective the rest of us didn't.  She was pretty closemouthed and the whole thing.

"No, no, no," Jessica said and I curled my fingers around the door handle, just in case.  I knew that tone. "In this day and age, there are quite a few more important things to worry about.  It is just a word. It's totally lost its meaning." Sinclair was looking up at her in the rearview , and Tina was edging away.  Only Marc, who couldn't smell emotions, was oblivious.  "Now you go ahead," she continued calmly, "You call me that once."

Silence. Followed Marc's meek, "I didn't mean we should go around calling other people that.  I just think - I mean I don't think - not that anyone should cal you - or call anyone-"

"Will you stop already before one of us has to knock you unconscious?" I asked.

Jessica snickered, and that was the end of the discussion for the week. (pg 44-45)

First we have the very white Marc suggesting that the N word is just a word and then we have the fact that it's left for Jessica to call his ass out.  Yes, it's important that the racism gets called out but problematic that it was left to the only Black character whose role simply amounts to a servant.  If Betsy is so progressive because she has had a Black BFF since childhood, why didn't she put a stop to Marc's racist comments?  Also, it absolutely needs to be said that Davidson is not the person who should be writing about racism ever.  I am sick of Jessica's race constantly be brought up as though that is the only thing significant about her. I am sick of Jessica acting like Betsy's ATM and I am sick to death of her playing wise negro to Betsy.  The entire thing is hella racist and Davidson simply needs to stop.  No inclusion would be better than the drek Davidson writes.

At this point, there's pretty nothing redeemable about this series.  Betsy is a narcissist, shoe obsessed twit.  Eric, her love interest is a control freak and lies by omission constantly.  The two marginalized characters are nothing but tropes. Undead and Unappreciated is absolutely vapid with not central plot to speak of and goes absolutely nowhere.  It's a series of events loosely strung together that is then falsely labelled a book for some reason.  How the hell did this drek get published and can I please have a couple to redeem the hours of my life I lost reading this so-called book?  At the end of the day, I suppose I have to blame Sparky for the fact that I am reading this series.  Oh there will be justice.