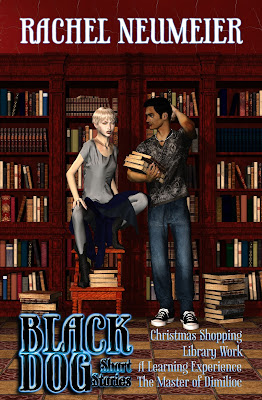 I’m not going to begin with my usual “I don’t like short stories because reasons” disclaimer, because I really don’t think I applies here

This is an excellent short book with three separate stories in it. They’re all very compact, relatively simple stories but, above all to me, every last one of them is really useful and even necessary to the broader plot.

The first story, Christmas Shopping, addresses one of my underlying concerns of the story – the relationship between Keziah and Natividad. These two are the most prominent by far (and, to a degree, the only appreciable) female characters in the series – it is a very male dominated series, especially in major roles even if Natividad is usually the protagonist. Few prominent female characters and those female characters hating each other with the fiery passion of a thousand exploding suns is, alas, a powerful trope

So this story of Keziah and Natividad spending time together is an excellent story. They don’t like each other a great deal, certainly – but this is a rift brought about form vastly different experiences, tastes and lives. Them being together in this story both excellently showcases this while, at the same time, having them build more and more connections, more understanding and approaching, if not friendship, then perhaps mutual respect. It’s all nicely capped with something Keziah taunted Natividad about becoming a joke between them

It also comes with a nice bit of world building shouting back to the major war that defines this series. In all, an excellent story – though I do have a discomfort with how very awed Natividad is of towns and cities. Sometimes her POV gives the impression that Mexico has no great cities and isn’t very sophisticated.

The second Story, Library Work, also brings some really necessary elements to the series. In this case we get to see a lot more of Miguel, Natividad’s human twin brother who is often out on a limb in the world dominated by Black Dogs and magical Pure and vampires. This book helped emphasise his strength – he’s smart, he’s cunning, he’s patient and he is excellently skilled in not only navigating around the dangerous Black Dogs and their uncertain tempers – but also in outright manipulating them for his own well being.

On top of this we have the greater development of Cassie, cambiador, cursed human shifter who, again, is primarily empowered by her intelligence. She and Miguel work extremely well together in their cunning, setting themselves up as a very formidable couple who I really want to see more of. It also set them up as a potential romantic couple which is also excellently defined as much or more by respect of their intelligence than it is by physical attraction.

A Learning Experience brought some attention to Thaddeus and his history as well as, though she didn’t play a huge role, the importance of his wife DeAnn. This is important because they are the only Black characters in the series but also bring some very important lenses to the series by being the only Black Dogs with no connection to the Dimilioc. He gives us an excellent insight both into how Black Dogs outside the Dimilioc manage – but also how the Dimilioc appears and has developed from an outsider’s view.

I also liked how he had different words for Black Dog concepts from the Dimilioc – again it’s a nice touch to remember that not all supernatural beings of one kind will share the same culture and references which is often missing in other books.

Another element all four of these stories brings and develops is Grayson the Alpha of Dimilioc, despite never making him the central protagonist we see a lot of his development in these stories. They emphasise his power, how scary he is, how dangerous and how powerful – but also how tolerant he is and how light his touch is, especially compared to the cruel dominance of his predecessor. This is mostly overtly underlined in  The Master of Dimilioc but also in A Learning Experience since we see Thaddeus’s expectation of Grayson’s behaviour, his fear of Dimilioc even if, as non-Dimilioc, they were not breaking any rules. Even the way Thaddeus related to his father – an apparently benvolent and gentle father – made it clear that brutality and fear was still a feature of any Black Dog Relationship. Grayson showed compassion and understanding by setting careful but understanding limits on Natividad. Grayson cunningly saw though Miguel’s scheming in Library Work – and then addressing it in a way that both established his control and his tolerance and intelligence. His tests of Thaddeus in A Learning Experience showed his lighter touch, his emphasis on control and how he valued Black Dogs who were not just obedient but capable, intelligent and autonomous, able to work without direction. This culminates, ultimately, in The Master of Dimilioc, another story that was all about Grayson while not focusing on him – and how he managed to sway Ezekiel and become Master of the Dimilioc not through might or fighting skills or control or power (his predecessor, Theo, ultimately exceeded him in all these things) but because he was such an obvious better choice. He now rules Dimilioc because he is good – because he is clever and compassionate and just (at least in comparison to what has come before) and is so good he could change other Black Dog’s loyalty who had never even considered the possibility of rebellion, ever.

I’ve already mentioned that Christmas Shopping happily counters some of the most egregious treatment of women in this series. I also love how Cassie is clearly Miguel’s peer and as smart or smart than him, promising another excellent female character. I also like how, while she’s not a major part of A Learning Experience, DeAnn’s intelligence and courage as well as profound influence on Thaddeus shines through in his story. That leaves me more saddened that The Master of Dimilioc uses the abuse of women as a tool and easy characterisation of the evil of the old master – even if it is urge to protect Pure Women that finally pushes the open rebellion.

There is a large amount of racial diversity – Natividad and Miguel are Latino and repeatedly slip into their first language in a very natural and developed way. Keziah is Saudi Arabian. Thaddeus and DeAnn and Thadeus’s father are Black and the cur Thaddeus is hunting is east-Asian. It’s a very very racially diverse cast

Sadly, there are no LGBT people.

Despite my usual dislike of short stories, I will say that this book is absolutely essential to reading this series and a joy to read. You can read the rest of this series without reading this book – but the series is a lot richer, a lot more meaningful and a lot more fun with this book as an excellent foundation for it. It excellently colours in the rest of the series, it fills in a lot of the gaps and develops the whole world wonderfully even if it doesn’t expressly add to the meta-plot

It’s excellently unmissable while not technically be essential. A perfect short story compilation.