From Dusk Till Dawn, Season 2, Episode 3: Attack of the 50 Foot Sex Machine 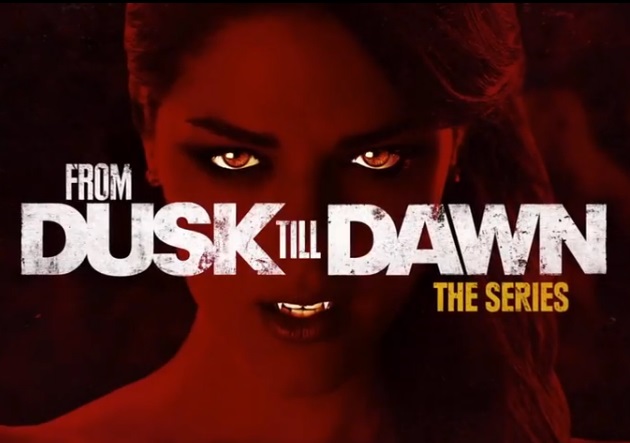 One of the downsides of reviewing and recapping is you find yourself typing things and then quietly hating your fingertips. The title of this episode is one of those times.

Some people are moving surreptitiously through the night until Santanico and Richie kidnap one of them.

Richie goes to see a guy called Eddie who apparently likes them – since he paid to have their fake bodies buried and greets Richie with a hug. They discuss good coffee and Richie wants to be connected with a man called Nathan Blanchard, who Eddie describes as a “pimp” and generally not a nice man. Eddie’s leery about Richie being apart from Seth until Richie finally guilts him into helping.

Back to Santanico who is eating rats and now has a collection of women in a cage. She drags one woman out and brutally forces her to dance.

Richie gets his meeting and tells Nathan he had stolen a truck which happened to be full of “immigrant girls” he’s looking to sell on to Nathan – a “flesh trader” and become a regular “supplier.” To which he shows videos of half naked women Santanico has forced to dance. And Richie is offering to “sell” women rather than “rent” to try and get an in on Malvado’s network (and new blood source). They set up a new deal

While the woman Santanico made dance is trying to stand up to her – Santanico tells her that no-one will touch her but she is going to use the woman to bring down Malvado. She gives a snippet of her history to the woman to show off, again, how much she really loathes him. The woman, however, says Santanico is doing the same thing to her that Malvado did to Santanico

Richie and Santanico talk, covering a range of subjects (like rats tasting good because they don’t have souls and Santanico trying to get Richie to eat some of the women) and their motivations. Richie has dreams of replacing Malvado and controlling his organisation while Santanico wants it all destroyed. His perfect eye-sight is also fading, he’s wearing the glasses he wore while human. Santanico says his “calebros soul” is warring with his mind. She doesn’t think his humanity will last which is nicely ominous.

Nathan has sent two men to kill Richie and take his “cargo”. Naturally, it doesn’t go well for them with Santanico pretending to be one of the kidnapped women and Richie killing and taking the place of one of the men (using the Calebros disguise – they can look like the people they eat).

He returns to Nathan with one of his men’s head in a bag. Richie lays down his new rules and how it’s going to happen. Nathan seems to agree. I suspect double crossing will happen.

Seth has got his hands on some heroin and is hallucinating rather annoyingly. After several interesting visions it seems he’s actually with a woman called Sonja the tattoo artist/forger who isn’t his biggest fan after the shenanigans last episode in which she was implicated as being his accomplice in stealing from a major criminal gang

She’s not a happy person. He tries violence but he’s way too out of it for that. She wants $20,000 or all her stuff back. Step one is getting him off the heroin – so she ties him to a chair and leaves him there. He goes into withdrawal and she becomes much more comforting – but he continues to hallucinate.

When he finally comes out of withdrawal, Sonja asks him about The Regulator and whether Seth is going to help Richie since he’s hunting his brother. Seth goes with a very firm no. Seth is suspicious about her curiosity about Richie and he accuses her of being a Calebros. When he tries to strangle her, she turns and storms off.

The next person to visit is Carlos – now with his face restored, demanding Santanico and Richard.  Seth shoots him repeatedly – and does little. Sonja conveniently arrives with a getaway car though

Last episode Freddie just found Professor Aiden Turner’ (aka Sex Machine) safe in which is a special book, the Codex, which contains all kinds of Calebros lore including the key to a prophecy which has got Malvado all excited. There’s also a snake there – which Freddie rips the head off (reminding us that Freddie is a little more than a usual human)

Which is what Aiden, the new Calebros, finds when he goes to grab his book.

Unfortunately for Freddie, the policeman he’s left guarding his house isn’t doing a great job and gets eaten by Aiden – he then uses Calebros shapeshifting to convince Freddie’s wife Margaret to let him in. He is looking for Freddie’ research and finds some on him – or “professor perv” as Margaret calls him since he’s known for sexually assaulting female students and the college doing nothing about it (much to Margaret’s unshocked disgust). Aiden can barely keep his act together because he’s such a terrible person

Despite that, Margaret has been desperate to talk about Freddie’s paranoid behaviour for a while and Aiden, looking like Tony, finally gives her a chance to unburden: and tell him all about his vampire notes and weapons.

Aiden continues to grossly leer at Margaret but thankfully Feddie comes home – and his clumsy words reveals to Margaret he is having her watched. Margaret is not happy but Aiden asks after what Freddie found at his house which is waaay beyond anything Tony should know, and Freddie pulls a gun on him. Freddie knows exactly what’s happened and Aiden doesn’t even try to hide the fact and Freddie shoots him in the head.

Margaret is duly terrified by this – and then Aiden stands up in his true form. Freddie grabs his stake gun and drives Aiden out of the house before pulling down the shutters. I guess Margaret’s in on the secret now

She is utterly horrified and while Aiden rants about Feddie taking his book while he tries to hammer his way into the house, slithering in as a snake. Margaret recovers well and tells Freddie to “send him to hell”. I think I may like her.

Freddie and Aiden fight – and despite initial wins, Freddie ends up on the floor with Aiden ready to stab him until Margaret holds a lighter to the codex. She trades the codex for Feddie’s life. He leaves before the sun come up.

But Margaret leaves him – she wants him to kill the vampires, do what he does best, but it’s not safe for her and their baby while she does so.

Ok… what is Seth actually in withdrawal from? Because everything we saw earlier points towards heroin or similar opiates… but hallucinations are not really a symptom of opiate withdrawal. I suppose it could be Benzo withdrawal – but everyone talks about it as heroin. Have the writers just decided “withdrawal” and gone with anything – or is this supposed to be indicative of other problems Seth is having?

“Definitely undocumented” That joke was terrible on many levels.

We did have some interesting elements with different women here. Margaret for one – I like her, I think she has a lot of potential and am sad that she’s disappearing for the sake of Freddie’s development and motivation. At the same time I find her decision to leave interesting – she clearly still loves him, isn’t against him hunting and isn’t a coward… she seems to be genuinely making a sensible decision to take herself and child out of harm’s way until Freddie has dealt with things and she can return to him. It takes her out of the picture which I don’t like, but the reasoning is sound. Still it does remove her

The use of enslaved trafficked women could very quickly go to a terribly objectifying place – especially on From Dusk Till Dawn which generally revels in sexual objectification. But the trafficking of these women was linked directly to Santanico’s past and, through that, her utter rage at the injustice against her which in turn underscores this as an injustice. I also like that the kidnapped women herself shows defiance and anger to Santanico rather than just being a victim – though she is still sexualised and nameless.

Then we have Aiden who is a sexist pig… and while Margaret makes it clear how very revolting he is, I also don’t see what it adds, what it achieves? What does all creepy staring at Margaret and the camera focusing on her legs and breasts actually achieve in the plot?