Fear the Walking Dead: Excuses for the Death of Black People 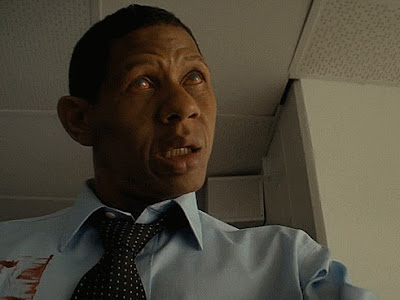 For quite some time there has been a bit of discussion regarding race and The Walking Dead. To date, we have already written three pieces. The Walking Dead has a history of introducing marginalized characters and then having them sit in the background as the case with T Dog until they need a member of the group to die off.  It’s with T Dog that we first start seeing racial memes appear. The Walking Dead would go on to produce a T Dog chain in which Black male characters became interchangeable before quickly dying. 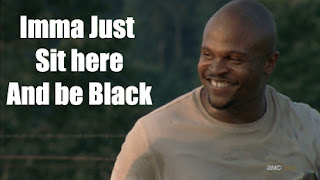 Michonne, a huge fan favourite is little more than a walking weapon and Sasha, at least in the last season, was too caught up in her grief to really grow. It was with great trepidation that we started watching Fear The Walking Dead. When we first noticed how interracial the cast appeared cynical people that we are, we didn’t start off with much hope after all, The Walking Dead the prequ to Fear The Walking Dead started off pretty inclusive and well, we all know how that ended up.

Now that we are two episodes into Fear The Walking Dead, one thing is clear, the authors and producers clearly don’t care what messages they produce about the supposed disposability of people of colour. In short order Artie, Calvin and Matt are named, introduced and quickly killed off. What is this but thumbing your nose at an audience which has clearly shown displeasure at the handling of race in The Walking Dead Universe? Given the controversy, showrunner David Erickson sat down with the Hollywood Reporter to discuss the issue of ongoing Black death.

"I realize it's clearly become an issue and it's something we are mindful of," Erickson explained. "But ultimately it's trying to tell the story the best way we can and cast the best people we can. I wouldn't want to go back and recast a character just to avoid … if it doesn't feel true to the character or the relationship -- the relationship with Alicia and Matt or Calvin and Nick."Also, according to Erickson, producers casting the series didn't even know which characters were going to live or die.


First of all, I call shenanigans. I’m going to call blatant shenanigans on the idea that the casting producers didn’t even know which characters were going to live or die because it doesn’t pass the smell test


You’re asking us to believe that all three of these characters who were killed off in the first two episodes just happened to be Black out of some cosmic coincidence and there’s no way the people casting these roles could have known otherwise? No. Nope. Do not buy it.


Apart from anything else, it requires us to believe that the Casting Producers had no idea what show they’re working for. Seriously, this is a zombie apocalypse show. If you have a brief that says “actor, appearing for first two episodes only” what do you THINK is going to happen to them? Do we honestly believe that when the Casting Producers are casting for a guy who will play Alicia’s boyfriend but only for two episodes out of the whole season that they DON’T think this guy is going to die?


But that also brings us to a related issue - the casting of tokens. Because maybe, just maybe, the Casting Producers didn’t realise that these characters were going to die (let’s assume they have access to some really powerful drugs). Instead what we have is three token characters - three characters who were little more than names who existed primarily for the emotional/angst development of other characters. That’s kind of the entirety of how they are defined. Matt is Alicia’s boyfriend. Artie is Madison’s boss. Calvin is Nick’s dealer. They aren’t characters in their own right - they’re extensions of other characters.


So let’s look at that casting. Maybe they didn’t cast Black people expressly to die. But they did cast Black people to expressly exist to be extensions of other character’s lives. And I want to know what the casting notes looked like? Was race specified for these roles? What it left open? And, if so, what about the more major roles?
Because it’s telling - either through Producer notes or the decisions in the auditions - that Black actors were only cast for token roles that would exist only for a couple of episodes rather than the main, recurring, meaningful characters. Why did the producers decide that, actually, these Black actors were just IDEAL for a role that will only last a couple of episodes - but not for any of the meaningful major roles?


It’s classic tokenism. If you have decided that none of your main characters are going to be Black but decide you need some inclusion anyway (for those precious cookies) then all that is left to cast are tokens. If you decide you need to show a Black face on screen but are averse to having that Black face be involved in the major plot lines


I think this is the root of a lot of the disposable minority trope in general and the killing off of Black characters specifically in both The Walking Dead and media in general. I don’t think someone sits down and thinks “hey let’s kill Black people” (though that may be extreme and out of character naievty), but I do think we have producers/writers/et al refusing to cast Black actors in roles that are meaningful, developed or pivotal to the plot. Black actors do not get plot armour, they do not get the 9 lives that any protagonist gets. They rarely get roles that make them the centre of a show or a plot line. Which means they are disposable. When a writer needs someone to die off - to set the theme/tone of the show, to advance a character’s growth, to just add to the horror and gore - they find that they are often left with predominantly minority bodies to choose from. It’s also often why we see Diversity Decay.


Minor side characters are prone to dying off. That is, in many cases, what they’re for - it’s the dramatic purpose of these characters so the main protagonists can be sad and scared and shocked and the plot can develop. That’s not even, necessarily, a bad thing, after all it’d be a pretty lacklustre apocalypse if only nameless extras died. But it is a bad thing when racism makes showrunners, producers et al repeatedly put Black people in these extra roles to die for drama and rarely, if ever, allowing them to be the plot-armoured protagonist who nobly soldiers on. Your major character crying over the grave of their beloved-sacrificed-minor-character isn’t inherently bad - but it is of the one in the grave is repeatedly one of the few Black characters, while the dramatic tearful one is likely not to be. Especially since their tears are likely to be dried and forgotten in an episode or two.


The reluctance to cast Black characters in major roles means we will always seem this lazy, tokenised “inclusion” with Black side-characters. And, especially on shows like Fear the Walking Dead that means that those Black characters will repeatedly be killed


I also think we have to address:

I wouldn't want to go back and recast a character just to avoid...

Well… maybe not. But no-one on this show could have been unaware of the criticism that The Walking Dead has faced for its disproportionate killing of Black people. In fact, I will laugh in the face of anyone who claims that the show runners are this ignorant of the criticism of The Walking Dead and it’s killing of Black characters. They must know - and knowing that then, yes, they should have done something. Does that mean going back and recasting the characters? Probably not - it means being aware enough in the first place to avoid this whole situation, it means realising your franchise has a severe dead Black people problem and casting/writing the characters so that you wouldn’t double down on it in the FIRST TWO EPISODES of your new show. Avoiding perpetuating this trope after such a horrendous established pattern should have been high on their priority list - yet they are clearly content to continue perpetuating it.


It’s quite simple really, the dead characters of colour speak for themselves. Showrunners, writers and producers can profer any excuse they like but they cannot escape from the reality which they created and continue to create with every new Black death.  Given that this is all going on during a serious conversation regarding the disposability of Black lives, (and we cannot ignore the blatant comparison in the police shooting as well in this episode) the continuation of this racist trope shows not only a callous disregard for the fans who have spoken forcefully about this but for all people of colour who are as I write this in a vicious struggle to ensure that their lives are viewed as valuable.
Posted by Sparky at 9:00 AM