The Mark of Noba (Sterling Wayfairer Series #1) by GL Tomas 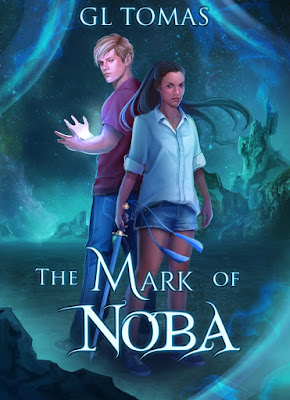 Then he meets Tetra, a woman from a whole other world who is mystically connected to him – and he realises he is far more unique than ever he imagined. And it comes with a mission far more important than setting himself apart from his fellows at school – or even finally screwing up the courage to ask Waverly, a girl he has a long crush on, out to the prom.

There’s a lot about this book I like. The concept of the book – with people from Noba fleeing to Geo to try and find sanctuary from a genocidal war that has been inflicted on their people by the Naga. This leads to two very interesting characters having to deal with this from separate angels

Tetra remembers Noba, knows Noba and is doing everything she can to preserve the last of her people, defeat the Naga and, especially, protect her bond-mate Sterling. We have some really excellent depictions of her trying to fit into Geo, a world that is pretty much a reflection of the US on Earth (honestly, you could replace "Geo" with "Ohio" and made no real difference). It’s really well done – from language mistakes, to different ideas of social taboos, to hobbies and rituals and attitudes: Tetra is a really excellent depiction of culture shock. I don’t think I’ve ever read a book that so well presented a character so completely out of her depth and out of her element. It really does work well – this world is so alien to her and she often comes across as unkind simply because she is in such a different cultural context. She is a wonderful mix of extremely talented, hyper-capable and powerful while at the same time being so totally out of her depth. It’s a wonderful mix of capacity and vulnerability

There’s also her feelings towards Sterling – how she clearly cares a lot for him but she has had to separate herself from him for his own good, forcing her to face all the problems alone. If anything I think there could be more development of her pain over this.

Then we have Sterling who is struggling to get by in life as a very ordinary teenager. Struggling with romance, with school, with making his life and establish his own personality and impact in the shadow of some very accomplished best friends. On top of these very real and very well presented standard high school issues he then has Tetra come into his life, telling him all these incredible things, messing with his mind and his memory and telling him that just about everything he believed is wrong – on top of his own worries about his mental health and having to guide a rather tactless Tetra through the alien vagaries of school life.

I like that he’s not perfect, and recognises that. I like that no-one is perfect. They’re tactless and self-absorbed and often struggling but they care and they try and that’s so very human about them.

There was a lot of good friendship and a nice lack of the usual issues like over the top-cliquism and Mean Girl collective that we so often see in fiction. In fact, I quite liked that the quasi-mean-girl Marjorie was shown to be a full person and defined as a decent enough character beyond her occasional snide remarks.

Unfortunately, I don’t think the same attention has gone into the other characters and I didn’t really engage with Kip or Grey or Waverly or anyone else around Tetra and Sterling. Maybe that’s because Tetra and Sterling are such excellent characters, but the end result was that the end of the book didn’t have nearly the impact I think it was supposed to have. Who lived or died, who loved who etc, was all somewhat irrelevant to me

Which, sadly, also applies to the whole high school setting. I wanted to know a lot more about the Noba, about the Naga and about the powers that the Nobans wielded and the nature of the bond between Sterling and Tetra… but we didn’t get enough. We focused far more on various school issues. Thankfully we had some nice look back into Sterling’s vanished memories but not nearly enough on what it actually means to be a Noban or what the powers they have mean or can do. Sterling, in particularly, seemed oddly uncurious about them. I can’t imagine if, when I was a teenaged boy, discovered I had any kind of powers that I wouldn’t want to know everything about them and wouldn’t be using them quite frequently. The sheer mundanity of the story confused me and annoyed me – I wanted this fascinating world to be delved into. I didn’t particularly care about high school drama which I suspected wouldn’t end up being especially relevant as the book progressed.

One thing I keep debating is whether I’ve received an uncorrected proof instead of a finished book? I almost hope so because this book could really do with an edit. A lot of the writing is clumsy and the place names are just plain lazy – the city if called City, we have other places literally called Province, Borough and Suburb. The biggest city is called Megalopolis. I actually wondered if they were all in italics because the author intended to come back afterwards and fill in everything with actual names – I dearly hope so because this is lazy and kind of jarring. Some of the writing was also quite clumsy and, again, suggested this book is in a pre-editing stage

Diversitywise we had a large number of POC. As an alternate world, race is not defined in the same way that it is here but rather by “type”. With Type 1 people being the palest through to Type 5 who have the darkest skin. There are a large number of people who are mixed Type and who are clearly non-white and Type usually appears in someone’s description at some point with a large stress on both the diversity of the cast and the beauty present in people of every Type. Nearly every relationship depicted is also between people of different Types and not the most common White + Other we normally see.

I just think that the whole concept of “types” needs more history and building to it. There’s no sense of any different cultures, languages or religions on Geo (the alternate Earth) or different countries or places of origin. Everything is Geo (which, itself, is basically just the USA). There’s no sense of prejudice based on skin colour or different origins based on skin colour or basically skin colour telling you anything about a person other than, well, their skin colour. It’s a pure aesthetic label. Which is fine in an alternate world (and a way of presenting a diverse world without deciding our prejudices must travel with them) but I do wonder why there is such an elaborate system of racial typing, of overt classification and labelling in a place where race is so meaningless? When there are no racial communities, cultures, no racial oppression, no racial separation, no racial othering then why do we have a system of racial labelling? I’m not saying this is terribad awful, I’d just like more information to back it up, some more world building or some sense of POC culture/community/identity especially since the world is so very pure generic USA

There are no LGBT characters. Tetra briefly mentions the appearance and attractiveness of the other women around her, but it seems more of a comment on aesthetics than actual attraction as we can see with the sharp contrast between her description of their beauty and her sexual appreciation of Kip’s sexiness. More, the way Tetra describes Noban culture is very very heteronormative.

We do have a disabled character in Sterling’s mother who is schizophrenic. Some elements of this are well done – her guilt, her struggles and how hard it is for Sterling. As a teenaged caretaker of a disabled parent, Sterling has considerable struggles and stress. The problem is this is kind of the entirety of Lauren’s portrayal – she is Sterling’s disabled mother, loving and trying but ultimately a source of difficulty to Sterling. She is only really seen through the lens of Sterling, her caretaker, and we get a very one dimensional view of her. It’s not that she isn’t sympathetic and loved – but she is a burden. And in the end woo-woo gets involved which undoes everything anyway.

I am intrigued by this book and the concepts in it. The two main characters have definitely engaged me and I think it’s an excellent foundation on which a whole series can be built. Now the basic concepts and characters have been introduced we can now expand on all that world building I’m so hungry for and take it to new and more fascinating and less generic settings to really show everything off.