Matt is doing a voice over to patriotic music as the whole gang fights lots of buzzy flying Espheni. Lots of shooting and fighting and Weaver’s little servant guy gets killed. Everyone pretend to care about the dead extra.

With the attack Weaver insists that they stay one more night before the attack. So everyone gathers around the camp fire for a big inspirational Mason speech. Yawn

The next day a load of bikers arrive – it’s one of Mason’s militias. Which means we have more people to hail Tom as their leader. They also get contact from one of the other militias describing a wall around DC (where they’re headed for reasons that probably made sense a few episodes ago before my brain begged for mercy). So it’s time to strategise how to get past the wall. And new guys are playing doubters since Pope has been kicked out of that role which means we have to have a lot of the same tiresome arguments (“why don’t the volm do it?” etc etc). It gives them chance to info-dump their whole plan (get virus bomb to queen. Kill queen, end Espheni).

Weaver decides to leave Anthony behind to hold the base – this is his gesture of faith. New team will attack the wall and be a distraction while Big Damn Hero Tom puts on his plot armour and goes through some tunnels to kill the Queen.

Battle time and Tom’s team enters the tunnels with a load of the named characters. Including people you wouldn’t expect to be in a strike team (like Digaan). They also find an Espheni hatchery – full of evil Espheni eggs and baby Overlords are apparently super-duper dangerous and violent. So they have to sneak past the eggs – and because of Lexi, Anne has a complete freak out panic attack about the eggs. Because she’s also pregnant. Oh joy, another Mason is on the way. This is proof humanity doesn’t deserve to be saved.

As they sneak past the eggs we hear some of Lt. Wolf’s back story (which also helpfully tells us why he knows the tunnels) and a brief discussion about the value of martyring yourself – which Weaver doesn’t approve of. Can you not have this discussion around the sound sensitive eggs?

Of course one of the extras bursts an egg, we knew that was going to happen. Lots of gun fire but no actual enemies to shoot. They then hilariously decide to keep sneaking and whispering after lots of gunfire. At this point I don’t even feel tension. I want everyone to die so much that the whole “zomg something may eat them!” instead is more “PLEASE LET SOMEONE EAT THEM!”) Lots of firing and grenades and stuff without them using any CGI budget on actually showing an alien. Is there actually an alien here or are they just fighting themselves

Alas, their inept firing of guns ends up with Tom Mason split off from everyone else by a convenient land slide. Of course it does. And Wolfe dies – behold my shocked face. Having three Black men on this show was never going to last.

So Tom works through the tunnels on his own to reach the outside and sees the Espheni colonising DC and the dramatic ruins of the Lincoln memorial. And he meets the Queen, who is big and scary and talks in his head about blood.

The Queen decides to fight Tom and have a conversation with him after sticking in some gooey web – she sounds oh-so-very-human and I cannot begin to understand why she doesn’t just kill him. She decides it’s time to psychically explain why the Espheni came to Earth anyway. Apparently Earth is the only habital planet in the galaxy so very useful stragegically (In case they wanted a staging point to… what? Invade all the non-habitable planets in our galaxy? I would have thought that would have made our galaxy useless). The Espheni invaded before as well – 1500 years ago which, for some reason, the writers of this show seem to think was the era of cave paintings and not recorded history. Pretty poor for a show whose main character is supposed to be a historian. Anyway, she sent her daughter queen to lead the invasion and primitive man managed to kill her. I put this down to supreme ineptitude on the Espheni’s part. You have the technology to cross the stars but not to overcome people who have yet to master gunpowder? Fail alien! Fail!

So now she’s here to avenge her daughter because mankind killed her daughter rather than just lay down and die. So she intends to eat Tom.

Back to the rest of the gang and Anne is having a problem – she has been hit by shrapnel in the big gun fight against nothing.

The Queen starts drinking his blood so Tom uses the virus on himself – which ten passes into the queen to kill her in a massive anti-climax. Seriously, is that it?

Killing the Queen causes all the other Espheni to explode. I kid you not, they explode. My giods that the worst possible anti-climax.

And Anne dies from her pointless wounds. Yes Anne has been killed off in the last episode because they all shot walls and threw grenades at nothing. Really? What an utterly pointless, disrespectful way to kill her off

Of course they reunite with Tom and have to tell him that they killed Anne with their own ineptitude and that he may as well have come on his own because the rest of them achieved nothing.

Tentacles appear and take her body into the lake for some reason. And then Pope appears. 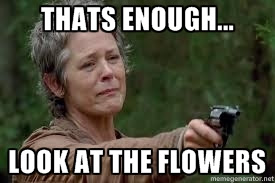 He’s not dead. Alas. He is injured and he does have a gun. He wants something… no idea what. Tom to kill him I think. Tom decides not to kill him and just leave him to die of his wounds

Back to Matt’s voice over in the new rebuilt world with everyone coming together and being so happy. Of course everyone wants Tom to be president (hah!) but he keeps saying no – and is now professor of the UN university so everyone all just kind of hails him as the expert. We have a whole new open utopia thing going on with everyone together – and Anne isn’t dead because ALIENS

This season was impressively awful. No, really – this show had already established itself as one of the more terrible shows out there. It constantly, endlessly mangled its canon without any regard for world building or plot line. The characters made repeated decisions that made not even the slightest lick of sense but were required to drag this broken plot line further forward. Things were blatantly rewritten, clumsily inserted and generally mangled to fit. On top of that the main characters were constantly deified and made flawless despite the fact they would have been dead a hundred times over in anything resembling a reasonable narrative but Mason Plot Armour may have to enter our lexicon because they REDEFINED the concept of a protagonist who can do no wrong and come to no harm.

So, given all of that, making season 5, the closing season of this wretched drek, even worse was actually an achievement. Someone sat down and said “this is our last season and we’re not going to be remembered for anything good so let’s be MEMORABLE. Let’s write the worst possible shit we can imagine – let it be that YEARS from now, when people are discussing bad shows, Falling Skies will be remembered”. I applaud that man, because he succeeded, this is some memorable drek.

I’m not even going to touch the whole bullshit of human society of the 6th century being able to hold off an Espheni assault AND leave no sign of it in the historical record.

Through all this there’s Tom bloody Mason. The bloody hero and everything is about him. Honestly was there any need to have him split up from the others at the end? He couldn’t be the general who led them, he had to be convolutedly split off from the rest so he could singlehandedly save the damn world because he’s Tom Bloody Mason?!

Most of the season was consumed by pointlessness. Hal’s love triangles. Pope (oh gods Pope). The weird little diversion to play with the possessed/cloned/whatever soldier. Tom finding the Little House in the Apocalypse. Pointless distractions for most of this season – the aliens actually seemed to be forgotten for most of it.

In between this mess how do they fight the aliens? Some random unexplained alien hands them a weapon which they rejig with the help of a brewer (uh-huh) they happen to run into, Cochise pulls some spying technology out of his arse (which would REALLY have helped over the previous seasons), we’re also introduced to an entirely new concept of an Espheni queen (also, helpfully, pulled out of one of Cochise’s orifices and, yes, this would also have been nice to know) and then we learn of many many armed forces out there (yet again, courtesy of random info Cochise just happened to remember but didn’t think worth bothering us with in the last few seasons). They link this all together by them JUST HAPPENING to stumble across a communicator the Espheni had left lying around. The Queen decides to hang around with ZERO GUARDS, come to Earth AFTER Tom has depowered her main weapons and then hang around with her main enemy for a little while. Oh and her death conveniently kills all Espheni.

In other words, we have so many Deus Ex Machinae lining up to make this season finale actually work that, I say again, Zeus himself would storm off in disgust. It is the laziest, most pathetic writing ever. Tom could have just driven in a random direction, magically found the source of the Espheni power then sat down and hoped a passing deity would nuke it – it has as much believable coherence as the actual plot line.

Of course marginalised people have never done well on Falling Skies. POC have remained either dead or in the background as teeny tiny tokens (Digaan, Wolfe and Anthony were all pretty much set dressing in this season – with Anthony’s character being ripped apart beyond all pretentions of self). Anne didn’t fare much better, primarily being defined as a love interest, but I guess she got to do amateur surgery on Cochise for… (what was the point of that damn storyline again?). Oh and she got to fake die for some brief Manpain.

And, in keeping with the previous seasons, there are no LGBT people. The Espheni’s first attack managed to kill all LGBT people in the first wave.


So Falling Skies is now over. It will not be missed.