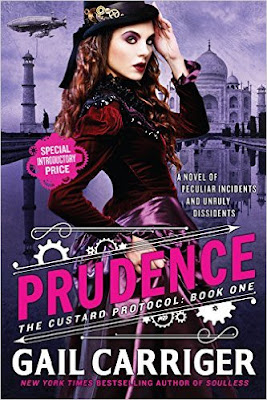 Prudence Akeldama is a very special child, a meta-natural with the power to steal the powers of vampires and werewolves and child of three of the most powerful people in the British Empire – she is destined to be change the world

The first mission of which is for her and her merry band of friends to get on their new airship (the Spotted Custard) to float to India, to ostensibly discover a new source of tea.

This was a very fun book. We had some delightfully amusing characters – Rue’s complete irreverence towards society, her shifting of personalities because of the many excellent influences in her life. She is skilled, capable, confident and pretty much determined to take the world by storm. I kind of love how she has this iron-hard self-assurance. In many characters it would be annoying – but it worked with Rue. Her confidence, her fierce belief in herself, her willingness to jump into any situation confident that her unique abilities, her skills and her relatives to pull her out of any problems she gets in.

We also have Gail Carriger’s excellent writing style that wonderfully uses flowery Victorian style with her humour and dash of silliness that really makes it work.

(Example: “She inspired, at even the best balls, a sensation of immanent dread. It was one of the reason she was always at the top of all invitation lists. Dread had such an agreeable affect on society’s upper crust.”)

I think the story could have been vastly improved if Rue were directing the story. If she went to India with a genuine mission rather than pretty much stumbling on the plot and then, somewhat, ineptly, then stagger around it

The book, sadly, has many problems. Above that there are two main ones. The first of which is that it is covering areas of colonialism, imperialism et al with a very shallow hand which is going to be dubious in any circumstances and I will come back to,

I’m trying to think how best to put this…. But, imagine there was a play being put on by some really great theatrical actors. Imagine that their reputation is immense and you cannot wait to see them in action. Then imagine, on opening night, the entire cast being struck by a particularly squidgy form of food poisoning and the understudies have to take over instead.

I mean, the understudies aren’t bad, they’re probably quite decent in face. But you can’t help but wishing each character was someone else. Prudence wasn’t inherently a bad character – but she’s a pale, weak imitation of the supreme awesomeness that is Alexia Tarabotti. Primrose is not terrible character per se – but Ivy was considerably more amusing. Quesnel is not inherently awful – but Madam La Foux was immensely more amusing. The relationship between Alexia and Connor was so much more excellent than that between Quesnel and Rue.

The sad thing is that each of these characters are, more or less, occupying he same place as their parents. Rue is the unusual, forthright young lady who is rather casual when it comes to societal mores – which is the role Alexia occupied. Prim is the best friend who is much more concerned with both societal mores and fashions and “proper female pursuits” – which is the role that Ivy occupied. Quesnel is the somewhat eccentric technical expert – but without the personality, eccentricity and skill of Madam La Foux. The book almost asks me to make the comparisons to past adventures and the past adventurers – and those comparisons are just not favourable.

It would help if everyone but Rue were actually developed – but Prim, Quesnel and Percy all feel quite shallow in the wake of her overwhelming personality.

These characters just feel so much shallower than the original Parasol Protectorate series and it’s not just the characters, it’s the world setting as well. I have repeatedly said with Steam Punk that I want to see some more attention paid beyond the very standard depictions of Victorian England. So this book going to India was something that definitely appealed to me.

And there was some effort to address colonialism – with the British Empire ignorantly applying the mores and laws of England and the way they treat supernaturals to a foreign country with very different creatures and histories and cultures. It was classic colonial ignorance- the Empire assuming that what applied at home applied everywhere so they could just apply the same rules to their colonies without any regard to the consequences. We also had some interesting points with the Vanarra and Mrs. Featherstonehaugh arguing against Rue’s assumption that the British Empire is automatically something they should welcome and want.

I also quite like how Rue analyses the British Empire from a very close point of view since it does parallel some marginalised experiences. Even when confronted by the fact that not everyone would welcome “progressive” British rule and acknowledging that, she has trouble seeing beyond the fact that every other nation would kill her for what she is. It can be uncomfortable and difficult to oppose an oppression when the oppressor would acknowledge your humanity – and the oppressed would kill you. That’s a hard battle

Of course, it does beg why Britain is the only “enlightened” and “progressive” nation.

Ultimately while there is a touch of challenge of colonialism, in the end (perhaps because of the characters) for the most part everyone is all “yay Empire” and I do hope, at least, with the addition of Sekhmet we can have some challenge if this imperialist cheerleading in the next book

It doesn’t help that I had absolutely no sense of Bombay or India from this book. It was a place, but other than generic foreigness, there was little to centre it in my mind as actually being India – there was very little involvement of Indian people. Even the mythology of Rakshasa and Vanarra seem very undeveloped, largely resting on the established world building of vampires and werewolves and just twisting them a bit.

As is indicated, there are not a great deal or very great POC in this book, especially for a story set nearly entirely in India. In fact, very few Indians are actually present in this book which is kind of sad, certainly any with actual names and personality. There was some touching of how the Egyptians newly introduced to London as part of Ivy’s hive were having trouble assimilating in the face of racism and classism (and the whole idea of “these are special POC unlike those OTHERS, which was nicely touched on) The only character of colour we have is Sekhmet who is interesting but more as a development for future books.

In terms of LGBT people I don’t think I’m even going to critique – I’m just going to link back to the commentary we made about The Parasol Protectorate; never have so many stereotypes, minced and wafted onto the page accompanied by the scent of pomander and lots of fashion & hair obsession all said in the most affected tones. It’s like an 80s sitcom come to life.

Ultimately, my main problem with this book is a simple “I expect better.” Because I do. Whatever flaws the Parasol Protectorate had, it had a brilliant story, some excellent characters, amazing writing and was frequently screamingly funny.

This is… not. And it’s not terrible. It’s just a very pale reflection of it’s predecessor.