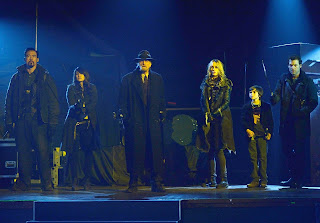 Kelly is continuing to become one of the Master’s more intelligent vampire minions with her own personality – Eichorst teaches her how to look more human, the skills she must learn and how her body will change. All so she can reach Zach and, through him, Ephraim
At base Ephraim and Vasiliy plan how to kill Palmer – and Ephraim wants a rifle to snipe at Palmer, relying on Vasiliy’s contacts to get him one.

While Nora would quite like to know what happened to Barnes, their old boss, and how he fell out of a train – the same train Ephraim was on. Oopsie! What a coincidence! He acts all ignorant and adamantly refuses to talk about what happened in DC

Ephraim takes Zach with him to buy weapons (because he’s father of the year like that) and pauses along the way to remind Zach his mother is totally dead and now a raving monster (as I said, father of the year). But the gun dealer Ephraim knows has had a disagreement with a client and is now all injured and bleeding.

Time for Ephraim to play doctor and have his son play surgical nurse. Father of the Year.

Having patched the man up they get a gun easily but co-operation between father and son ends because Zach is still sure Ephraim can save his evil mother.

At team evil, Palmer wakes up in bed with Coco. But evil mastermind business calls Palmer away – particularly he has to meet the Cardinal about his evil book. He also has to see Eichorst who Coco hates because of all the evil – and because he smells of fish. She wants to know about him and isn’t a big fan of Palmer trying to keep her in the dark. Makes me wonder if she has an ulterior motive.

Palmer meets up with the Cardinal selling the evil book – who spends a lot of time dickering over the price without closing the deal. He has another bidder – Abraham – and wants to see what he will pay. They’re interrupted by Eichorst who wants to know what Palmer is so eager to buy – and again Palmer completely fails to realise he is not the power in this relationship and throws lots of outrage at the vampire nazi. While he may not have the power and Eichorst may be dishing out the orders, Plamer still manages to twist the knife about the Master choosing Bolivar to be his vessel rather than Eichorst.


Vasiliy drives for grumpy Abraham and marvels at how much Feraldo has turned the city into a police state. Abraham is not impressed, ever impressed. We also learn that Dutch is taking Nikki to find a place to stay since she’s not comfy around them and Abraham, in his usual diplomatic fashion, demands Vasiliy “get his head out of the skirt and into the game” and actually focus on fighting rather than his love life.

They’re going to see the same Cardinal that Palmer met, the priest living it up in extreme luxury and disdainful of the fact they’re clearly not. Yet despite that, Abraham doesn’t hesitate to agree to a price tag of $750,000 - $250,000 more than Palmer’s bid. They warn him that Palmer will totally kill him and steal it.

Of course Abraham doesn’t have the gold but he has absolutely no hesitation about stealing it from him both to Vasiliy’s shock and childish glee.

That night the Cardinal gets a visit from Eichorst – and he is not dickering for money. Threats are much better currency. He quickly cowers the Cardinal and leaves him cowering while Eichorst mocks his faith and rather than question him about who has the Lumen he just bites him – soon the Cardinal will become a vampire and they’ll know what he knows

Which is when Abraham and Vasiliy attack. They drive Eichorst off and quickly get the Cardinal to tell them who has the book before killing the Cardinal before he becomes a vampire.

Palmer watches the news later and sees that the cardinal has been murdered. Coco has lots of questions and Palmer angrily silences her, offending her in the process. She storms out.

Despite all the security checkpoints, Kelly still gets across thanks to a distracting sacrificial vampire and her new make up.

Back to base and Ephraim and Zach return. Ephraim laments that he’s completely failed to get through to Zach to Nora who informs him he’s a terrible father (ok in gentler terms, but still). She also pushes him about the secrets he’s keeping about DC and he cracks – telling her how he totally failed and got 4 people killed. While they’re arguing Kelley arrives and talks to Zach through the glass

Zach, of course, lets her in (please kill this kid). There’s a battle between Ephraim and Nora and Kelley and the little spider kids and Zach finally seems to grasp that monster mummy isn’t his friend and smacks her in the head with a hook turning the tide of battle. Kelly escapes. I’m sure more angst will still follow.

Over to Gus and Angel who are looking for ingredients – and discussing god and leaving the city, something Angel won’t do without the Guptas and the Guptas won’t leave because they’ve sunk everything they have into their restaurant. Underscoring the need to leave, they seem more wreckage. They return to the restaurant and try to convince Mr. Gupta to leave.

Together they manage it and Aanya Gupta invites Gus to go with them with a kiss… but they have a visitor, Quinlan the super living vamp. He quickly makes it clear he’s infinitely more badass than anything ever and gives Gus an excellent recruitment pitch including, among it, the need to protect Aanya

I did like that Gus and Angel spoke Spanish. A lot of the time on TV we will see characters who clearly would not speak in English to each other and, because they’re alone, they have no reason not to – but we still hear English because of the choice of actors or because of so many audience’s hostility to any non-English language (and definitely to subtitles).

I want to know where Coco’s character is going. I hope she does have an ulterior motive because she seems destined to be ingénue or inevitably victim.

I want Dutch to be more than Vasiliy’s complicated romance who makes him jealous. And, yes, I hail that she is bisexual and it is depicted, but she wasn’t even in this episode!

I want Nora to be more than Ephraim’s love interest/confidant/advisor.

I don’t want Feraldo to be the only woman whose storyline isn’t predominantly defined by her romantic life (even Kelley!)