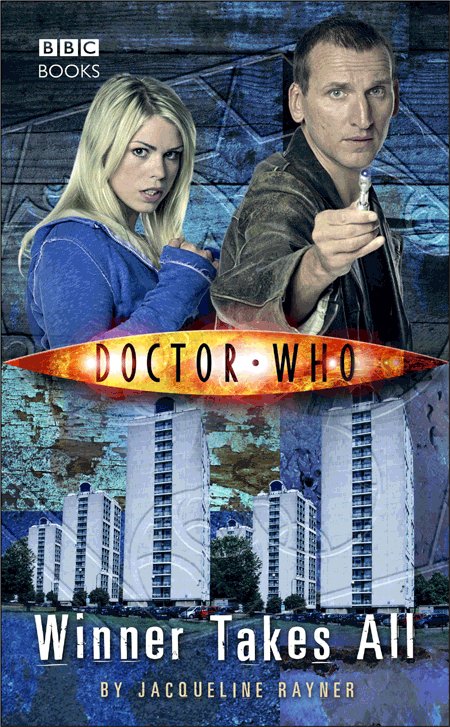 If you're in your forties, this book will probably feel a lot to you like the plot of The Last Starfighter. Desperate to gain an upper hand on the Mantodeans, the Quevvils, who look like giant porcupines have distributed a video game, promising humans vacations and fabulous prizes if they play it. In this case, the old adage applies, if it looks to good to be true then it is.  The Quevils are looking for a human smart and skilled enough to enter the Mantodeans area and deliver a disrupter. What these players don't realise is that the game is real and each time they die in the game, a real human dies. When the Doctor and Rose pop by to visit Jackie, Mickey challenges the Doctor to a game and being much smarter than the average human, the Doctor gets further in the game than anyone has before, thus drawing that attention of the Quevvils.  The excited Quevvils capture Rose and the Doctor caught up in their quest to finally win the war, not realising that this time they've caught their undoing.

Rayner did a really good job of nailing the characters perfectly.  Every page I read, I could visualize the ninth Doctor, Rose, Jackie and Mickey perfectly. I do however wish I have been given a better sense in the timeline of where this story takes place. My best guess is that it happens sometime between World War Three and Boomtown, simply based on the Doctor's relationship with Mickey. For the Doctor's plan to be successful, he absolutely has to count on Mickey not only doing his bit but being intelligent enough to pull it off and yet it's clear that he doesn't have any respect for him yet.

At this point, Mickey and Rose have clearly ended their semi romantic relationship but that doesn't mean that Mickey is above being jealous.  This is something Rose is acutely aware of - so much so then when she has to choose whose bonds to release first, Rose unties Mickey before the Doctor, sensing that had she approached the Doctor first that it would upset Mickey.  This is far more progress than Rose ever made in the show in terms of Mickey because there never really seemed to be a time when she ever considered his feelings, particularly if the Doctor was involved.  It was nice to see for a change, even if it was out of character for Rose.

I found it ridiculous that given the Doctor's abhorrence of guns that he would play Death to The Mantodeans in the first place.  The Doctor comments that there's a big difference between guns in a game and guns in real life but I don't believe for one moment that the ninth Doctor would have made this distinction, even if it meant showing Mickey up.  More than any other Doctor, the ninth is the PTSD Doctor and I believe that he would have been too haunted by the war and the destruction of Gallifrey to see this as a harmless game.  He does however go off on the stupidity of humans for believing that they could get something for nothing, which is characteristic of the ninth Doctor.


Winner Takes All provides one of the few examples in which Doctor placed in a situatioin where he didn't have many options.  Yes, he manged to work his way around the Quevvils but not without having to control Rose as a player in the game for a time.  He is adamant that no one would should be treated like this and felt strongly that this would change the nature of his relationship with Rose.  In these moments, the softer side of the Doctor is revealed and as a reader, I got a real sense of the Doctor's pain.   When he threatened the Quevvils if any harm came to Rose, it showed the darkness that lives inside of him if pushed too far.

The characters voice I heard the most clearly in my head is that of Jackie Tyler.  Jackie is never going to approve of the Doctor no matter how much time Rose spends with him.  When Jakie takes on a neighbourhood bully for even daring to speak rudely about Rose, I felt like the character had completely come to life.  There's nothing that Jackie wouldn't do for her daughter.  Even Jackie downplaying her injuries in order to stop Rose from worrying felt like classic Jackie.  I do however wish that there had been more interactions between Jackie and the Doctor because those are always hilarious, especially if they include a good slap.

As much as Raynor nailed the characters in this story, I wasn't enamored with the plot itself because it all felt so been there done that.  As I mentioned in the introduction, the story felt like a knock off of The Last Starfighter and I am positive that there are other examples of humans playing a video game which turns out to be real.  That said, when it finally got into the action sequence, it became hard not simply skim this story.  Raynor didn't do a good job of describing the landscape that Rose is forced to navigate and though we were told that she was in peril, I never really felt it.  At that point, everything became disjointed and quite frankly boring.

In the end, the Doctor saved all of the humans and just took off in his Tardis.  If anything pulled me out of the story it is this.  I don't believe that after killing so many humans that the Doctor would have let the  Quevvils get away with what they had done.  Sure, he made sure that their technology was destroyed but I simply cannot believe that this is all the Doctor would have done.  He didn't even do anything to stop the war and we know how the Doctor absolutely abhors war. Yes, the Doctor creates a mess and he flies off leaving others to clean up but he at the very least sets the stage for change which most certainly didn't happen in this novel.

We did get a strong sense of the Doctor's wanderlust.  With everyone out of danger, Rose simply wanted a night in her own bed but the Doctor couldn't give her that.  The moment things settled, the Doctor got bored and wanted to move on to something more exciting.  It served as a reminder that the Doctor will not stop and cannot stop.  It also gave us another example of how torn Rose can sometimes be and how different they really are.

I really wish that Raynor had put these characters in another scenario because she does have a real sense for them. The story the characters were placed in was not interesting or worthy of Doctor Who.