Blood Magic (World of the Lupi #6) by Eileen Wilks 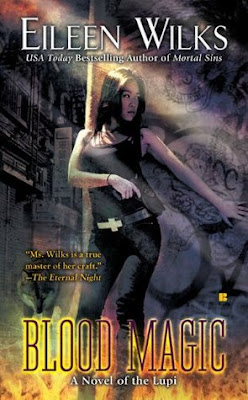 It’s not going to be easy

This series has had an amazing journey. It started like many other Urban Fantasy stories – we had Lily and her werewolf lover who fell in love because of woo-woo and somewhere along the way they solved crimes. It was good – but not exactly top 10 material or super original

Then the series exploded in every direction, we had Dis and Hell and the Turning and dragons and magical monsters and dimensions and gnomes and elves and everything and it was huge – far far far far too huge. It was nearly impossible to keep up and it was just messed up and drowning and confused

And now we’ve finally got to an awesome place. Enough of that huge meal of a world has been developed while at the same time we’ve had enough focus on Lily and Rule to keep it, well, focused and developed – and it can all come together to form an awesome whole. A huge world, some fascinating characters, a focused, undistracted story and a vast amount of potential. It has arrived. And I love it

I love Lily’s character as it has developed – her need to know things. And not just know things but needing to verbalise it. Her desperate need for order and organising things and making everything line up and make sense. Which is quite stressful given how random and huge and chaotic the world. Her flailing around in her relationship and upcoming marriage with Rule is so classically her – because she knows she’s doing the right thing and the thing she wants to do but it almost falls apart because she can’t verbalise it!

On top of that we get her epic control issues in a world that is so challenging to control. She would be an extremely awesome character if it wasn’t for the shadow of her grandmother who is always the most awesome. And her awesomeness doesn’t rely on her super powers (though her power is useful) nor is she super destructive or dangerous – but nor does that make her a damsel who is sheltered and protected – she can still more than save her own.

Rule has a lot of werewolf politics going on and it works so well – we see how Lupi politics and his personal life interact in complex but elegant ways. I kind of love how he doesn’t despair or panic or be really sad about his – he just flawlessly (much to Lily’s frustration) navigates it excellently. And yes, the whole werewolf politics down to the implications of leftovers at the BBQ

Of course there’s also Madame Yu. In some ways I was worried that revealing more of her story would ruin the character, yes, I’m shallow, but I’m happy to have a completely shallow mystery of pure awesomeness. But instead we get to see her awesome history, have a lot of her power explored and developed – and she still be ridiculously awesome beyond all measure

This is the woman who grew up in a deeply sexist society which told her from birth how inherently inferior her gender was – so decided this made her even MORE exceptionally awesome because she cannot possibly be inferior in any way.

Every scene she’s in she’s just faultless awesome – and in any other character she’d be morally questionable. But one does not Question Madame Yu. Ever. She is immune to questioning and is always right. Even when she’s wrong, she’s definitely right.

We also have final unambiguous confirmation that Madame Yu and Li Qin are a couple. It took a while but it’s clearly defined – and it’s one of the few depictions of an elderly same-sex couple in fiction. In most media, LGBT people (when existing at all) tend to vanish before too many wrinkles – or become single and alone.

We have ongoing excellent representation in this series. Lily Yu and her family are Asian – with well presented cultural markers without being reduced to stereotypes. Benedict, Rule’s brother, and several other of the pack are Native American. Several police who Lily works alongside are Latino and Black; the series has always made a point of having several POC in the background as well as among the main cast.

Over all, what I really love about this book and these characters so much is how they work with the world. The world isn’t a backdrop to show them off, nor are they a tool to display the world – the characters, the story and the world all work so well together without any focus overwhelming the others. It’s what makes the whole story work so well because it all works together. This series worked really hard to get where it is now