Wings of Hope (The Veil Series #0.5) by Pippa DaCosta 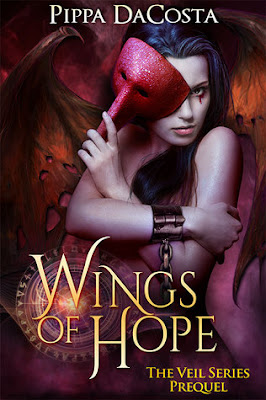 Muse was a slave to her full demon master, cursed and derided like all half-blood demons, she seem to have no way to freedom and nowhere to go.

Until she meets Mammon, the Prince of Greed who shows her a new way when he demands three nights with her.

This book is well written, dramatic, very well paced and with some very powerful emotional, impactful contact. The story showed us some of the demon world, the elementals, their powers and their council.

It was very dramatic and very stark which graphically depicted Muse’s horrendous past without pulling any punches or trying to romanticise any of it.

We were already told all this. And while I’m generally a fan of show-don’t-tell, I’m not entirely sure what is gained from telling and then showing. Especially when the showing depicts graphic abuse and torture and rape.

I don’t think there’s anything this story brings that hasn’t always been told. In some ways that fits with what I want from short stories – I don’t want them to be compulsory. But I also want there to be some point – and that goes doubly for any book that is this graphic. If there is going to be a depiction of such terrible abuse then I really would like to see a powerful depiction of why this is being shown and I didn’t see it here.

Of course, the abuse storyline does, ultimately, end with glorious strength and violence and vengeance. But, again, we already knew that – so why show it again? We know about the scars, so why show the wounds?

Diversitywise there was little there. All of the creatures depicted were demons so even those with darker skin tones do not correspond to human races – Mammon does have “honey skin” which could mean so many things. There are no LGBT demons – and I can’t even remember another woman in the book except Muse.

In the end it’s not a badly written book with a lot of action and good writing – but I really don’t understand the need for it and didn’t enjoy it enough for it to jut exist for the sake of it in the context of the larger series.