Beyond the Veil (The Veil Series #1) by Pippa DaCosta 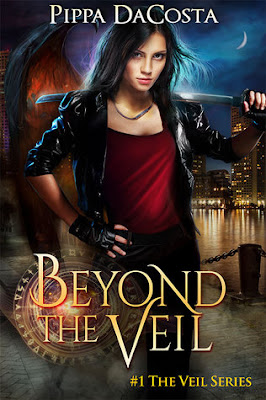 Muse has spent the last 5 years playing human, hiding her true nature as a half-demon. Reviled and enslaved by her own card, she clings to the façade of humanity as long as she can

Then a half-demon assassin visits her shop which promptly explodes. Apparently on someone’s hit list she has only one choice – to turn to her previous saviour, Akil, the Prince of Greed.

I liked this story – it had an interesting world setting of demons in the human world, demons hiding and semi-known to humanity but not quite to the full extent. We have Muse, the half demon, reviled and enslaved in demonic society and trying to find her own place in a world when she doesn’t fit among humanity or demons but needs both.

Muse’s story wonderfully reflects this conflict. She needs to be sheltered from the demons which can only happen with demonic protection. There are humans who will oppose the demons – but they so utterly revile demons that they hate her as well. She needs to control her demonic half which is so capable of destruction but at the same time cannot live without it. So many conflicts make for a good character despite the romance that I am not a fan of. No, really, I can’t stress how much the insta-love zomg-he’s-so-hot-this-overrules-everything is completely unneeded for this book

And there’s Stefan and Akil – both love interests and both with very shadowy and twisty motives. But Muse simply cannot refuse to trust them because she cannot survive alone

I do like the way the story examines ownership, slavery and freedom. Muse has been “rescued” from a master – a cruel and abusive master. But if your new master, no matter how kind and benevolent, still demands your attention and obedience then how free are you? A benevolent master is still a master, a kind owner still an owner. Especially if that “kindness” only extends as far as that obedience.

Unfortunately this book is fairly lacking when it comes to marginalised characters. Muse herself is quite a strong character – she has special powers (but not special enough to be a Mary Sue), she’s powerful (but not so much more powerful than the rest of her species to make her a special snowflake) and while she has anger issues like many Urban fantasy protagonists (who mistake poor anger management for strength) she is largely in control and her anger is always presented in a reasonable format drawing upon her actual experiences and history of abuse. And, yes, like so many Urban Fantast protagonists she does have a terrible, abusive history. But it isn’t tacked on or forced or convoluted or used for random characterisation without purpose (as is so often the case). Her terrible history is an integral part of both her story and her world setting: it carries a lot of the same clichés but there’s an effort to make these clichés work and be real parts of these characters and this world setting. Cliched but reasoned clichés. Cliches with some effort behind them.

Nica, Stefan’s sister, is a decent female character in some ways but she’s pretty vanishingly small role – and she exists as a damsel. And the only other woman in the book.

There are no LGBT people at all and the only POC I remember is the human body that Akil – the human body that the demon Mannon wears and he’s a prince of Hell. And I say wears because there’s a strong implication that it’s just a form he wears rather than his actual self, however, Mannon does draw from POC mythology even if forced into a different pantheon. Another annoying element to note is that Stefan’s mother is a demon that draws from Asian legend – and there’s no indication that Stefan is Asian.

I will give this book points for surprising me while not surprising me. Early on I made a predication about how the book would end, who Muse would end up with, who would be on Muse’s side and who would betray her. It was an assumption based on reading a lot in this genre and knowing the clichés.

And I wasn’t wrong. However, at several points through the book I thought I was, I thought I had made assumptions unfairly – several times the book convinced me it would be very different that the twists in it were going to lead to a very different place

Ok, in the end it turns out I was exactly right and we ended up precisely where I expected to be – but the journey surprised me enough that I genuinely thought we were going to end up somewhere else, with someone else with an entirely different shaped story

I think, in some ways, that sums up this book. Is it original? Not especially – it follows a lot of the predictable patterns of an Urban Fantasy – yet while it fits many of the same patterns and concepts and clichés of so many other books in this genre, it also adds enough of its own twist to be different and interesting. It’s not hugely original, but it takes us down a familiar path in a different enough way to still be worth reading – but not different enough or developed enough to be a great read.