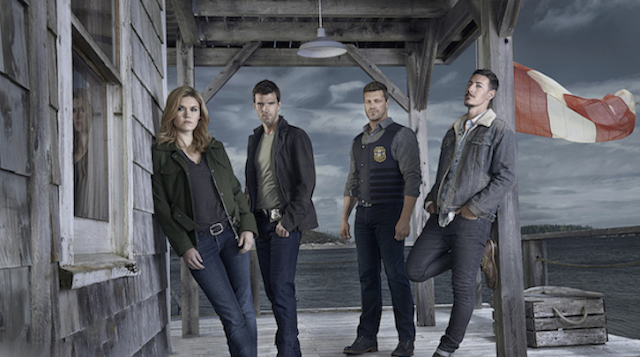 We move forward 2 weeks – 2 weeks of non-stop Troubles and people becoming more and more stressed. There’s a darkness Trouble – something which means everyone has to avoid the darkness or die horribly, leaving only a skeleton behind. Gruesome

Audrey is not getting on too well with mother Charlotte who still hasn’t cured the Troubles. She is getting on very well indeed with Nathan. They keep telling us about a gazillion Troubles happening all the time.

Oh and while there’s a Trouble that kills people in the dark, the electricity I acting up. They need to fix the power plant. At night. With Troubles everywhere. Well volunteered Nathan. Nathan whines that they need to stop the Darkness Trouble – uh-huh I’m sure that is on the to-do list Nathan.

Dwight has also instigated his own law – people who he deems guilty of hurting the group are “banished” (actually a better term would be “outlawed” since they aren’t sent anywhere but the Guard stops helping them). Audrey and Nathan realise this is pretty much a death penalty. Vince agrees with his choice, though Dwight has the guilt weasels.

Vince is also shown another body apparently killed by whatever is in Dave’s visions (no mark but weird eyes). Audrey confronts Dwight on not doing basic police work – like dealing with thieves according to the law and finding missing persons. She also learns about the dead man – the missing man who may actually be the one with the Darkness Trouble – Vince has to tell her about the vision/beast/serial killer including that it killed the Colorado Kid (Audrey’s son. Kinda).

Also rather than banishing people they’re using a Trouble to put people into basically sleeping comas. The Troubled guy isn’t doing well but he’s willing to help. At least it’s not a death penalty, but Audrey is still not amused

Anyway, Nathan puts his team together (including Charlotte and Dave). They set off through a Haven which now has warning signs and traps and all kinds of eerie things around. They lose one member of the party and Charlotte reveals they need more aether to fix the Troubles. A whole stash of it – which means they need William’s stash. They have a detector for it.

They get to the power plant and do some tinkering – and break it. You had one job! While Nathan and the extra go looking for Aethur, Charlotte and Dave stay to fix the plant and we learn Dave is a Half-line, half human and half alien/thingy.

As night falls, more and more people panic as they have no power or light and the Darkness kills people. Dwight continues to be an inspiring leader. Audrey puts together a couple of the more mundane Troubles to spread some light around.

While Nathan decides to climb into a dark pit to collect Aethur.

Dave and Charlotte get the power plant working and return to the school. Nathan and Extra are still missing

Audrey wants to find Nathan and Charlotte hugs her as she cries – just as Nathan is back. What did anyone actually think he was dead? Protagonist armour works the most. But extra lady is missing and her fiancé demands answers – she’s dead. Of course the fiancé blames Nathan.

Duke is living his life outside of Haven and he crosses path with Hayley, the daughter of an old friend of his who is having trouble because her criminal father has saddled her with dangerous debt. Duke offers to help “because he’s a good guy.” He has a problem because all his money is in the bank in Haven which no longer exists as far as the outside world is concerned. So Hayley considers using troubles to steal – Duke says no but Duke’s boss tries to kidnap her – and kill her for not paying the debts. Of course Duke saves her – driving a car through her since she has a walk-through-objects Trouble.

I quite like the random and somewhat mundane Troubles (reflective skin, sunlight chest) popping up because they’re fun – but they also don’t make a lot of sense. These are all Mara’s vengeance Troubles – reflective skin isn’t all that vengeance-y.

I do like the idea of a Haven that has become an almost Temple-of-Doom of booby traps. Quiet here or you wake a Trouble. Don’t step here, there’s a Trouble. Do this here or there’s a Trouble. That works and is nicely eerie and also shows how far things have got – there are places where they aren’t stopping Troubles, they’re just trying to work round them. On top of that with law and order breaking down we’re seeing more and more of the town degrade and fall apart. This slow decline is something I’d definitely like to see and is almost worth a season reboot – Haven becoming not a town struggling to get by, but a literal Silent Hill level hell hole to navigate. Especially as more and more Troubles like the fog happen that can’t be stopped And while it declines we get a more and more draconian society trying to deal with the chaos. Maybe even creatively using other Troubles to fix the problems

I really want this series now.