Liar's Game (The One Rises #5) by Anna Wolfe 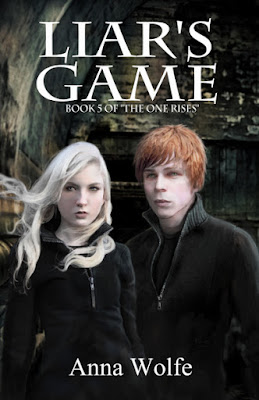 The Seer’s manipulations have become more and more blatant – not least of which is the virtual leash she’s placed on Silas, binding the powerful Demonborn and the leader of the Free Bitten.

Under the leash and with the desperate secrets he has to keep, his team is increasingly fracturing and out of his hands while he himself is more and more consumed with the fierce temptation for Callie which distracts him constantly

But despite the fracturing, the Seer has managed to keep her ties to everyone – to some mysterious end.

Ok, let’s address one of the nifty and annoying parts of the book. Yes it’s both at once.

See the entire plot involves people doing stuff because the Seer has manipulated things to make it. On the good side this means we get some final movement on some major plot points. We get a lot of meta development, a lot more insight into what the Seer actually is (which is pretty awesome) as well as a major sense of epicness about to happen. This story has always had big things happening in the background but, to a degree, we’ve had a much closer focus on Mark, Edie and Callie’s story. Stuff has happened in the background, but this is really about them, their personal development, their excellent family dramas, their coming to terms with their difficult pasts, their powers, their hungers and generally what it means to be Bitten. Certainly Silas and others have been far more involved in something greater and larger, but the main cast has been somewhat drowning in events set by other people

While we’re still very much focused on Callie and Silas (and, to a lesser degree, Mark and Edie) and their personal story –but now we are bringing in more and more wider elements. We can see how the Seer has manipulated Silas and so many others in the past. We can see how much all of this, the whole story, comes from the Seer pulling strings and always has. We can gain a sense of just what is at stake and the epic consequences and requirements of the Seer’s manipulations. We even get an insight into the Seer themselves, endless, but changing ruthless but driven and almost desperate while always in control

All of this is good

What is not so good is that all of this is a taste because, obviously we don’t actually know what the plan is or where any of this is going. The Seer does, we don’t. So any and all of this could be random. Mark, Jiye and Mimi? Silas and Callie? The Spider and his family? Edie, Hatter and their respective families and creators? We don’t know the why of any of it. The Seer could be playing a grand game of madlibs for all we know. I am sure context is coming – but so far the lack of context makes the plot hard to follow and a little frustrating. I am hoping it’s foreshadowing for more, though.

The other element I’m torn on is Silas and Callie. Protagonists who are just so into each other they just can’t stand it and they must have sex now now now now now are not unusual in the genre. However, rarely do these books manage to convey WHY the protagonists are literally hungering for each other like drug addicts for their substance of choice – usually they’re just that horny and hot for each other that that is supposed to make them almost go into withdrawal. In this case, the whole nature of being Bitten kind of sort of explains this. Not only does it help explain this but the way they deal with the hunger is interesting. After all, supernatural being is too dangerous to have sex with is another compelling trope – inevitably ended by the characters in question deciding to have sex anyway. But here we have Callie and Silas actually being legitimate afraid and actually taking steps to be as careful as they possibly can with each other. It isn’t just brushed under the rug and their fears remain powerful and present not just vanishing as we’ve seen so many times before

And we have Callie who is sexual – not just with Silas but quite willing to find her own way to have sex. She wants sex and she’s not going to let barriers between herself and Silas prevent that from happening

To put it another way – I hate this whole trope cliché: the couple so obsessed with each other it consumes everything else, sex which is so dangerous that it should never ever happen but they’re still doing it and all the emotional relationship angst that goes with it. But if it’s going to happen then this is the best example of it I’ve ever seen. I’m not a fan of the concept but the implementation of this is excellent. In fact the whole series has always been good at showing a much darker, less fun side of these Paranormal Romance tropes.

There are a number of POC in this book. Silas is confirmed as not just a POC in a generic vaguely described manner but is now also has a real cultural heritage and history in Turkey. Edie isn’t a huge character in this book but she’s present and bound to return; again we also look at her Black family with some look at her culture and family history as well. Jiye is Asian and, characteristic of many minor characters, we have nice insights into her character by bringing in her relationship with her mother. Even though she’s a minor character we have these little hints to make her more of a character

There’s also Spider and his family, half-Asian with an interesting conflict of his sister clinging to a Japanese heritage they don’t even know they actually have. It’s a nuanced complexity for rather minor characters

We have 3 notable LGBT characters and in general there’s a lot of good there. They’re powerful, prominent and skilled and they’re lacking in most of the common clichés. Except they’ve all got something which makes me cringe. Take Silas – having admitted he was attracted to men as well as women he, at the very some moment, is adamant that he’s not bisexual and that his whole alienness makes those not apply. Why? Why not have him be bisexual? Why introduce the idea that he can and has had sex with men and then quickly run as quickly as you can from any kind of LGBT identity? Why does the idea of men having sex have to come with this completely unnecessary “no homo” moment? This is further exacerbated by the sex between men being largely spoken of in the abstract while we have many many many explicit opposite-sex sexy times. In fact, I don’t think the depiction of same-sex sexuality has ever been as graphic as the opposite sex we’ve seen in this series.

And Mimi and Jiye have one real storyline – being bonded to and linked to Mark. A storyline which repeatedly as a lesbian – a woman who describes herself adamantly as such – being forced into having sex with a man due to the manipulations of her parent and to the endless spitting rage of her girlfriend. Having the LGBT representation be “man who has sex with men but is totally not bi!” and “lesbian who has repeated sex with a man and her raging jealous girlfriend” is… not good.

This book was, in some ways, transition book. We have moved from some very personal stories to finally addressing some major conflicts, the Seer’s manipulations are now clear and blatant hand. I assume we’re actually finally moving towards the often-mentioned “One” actually rising since this is the name of the series. So this book is less a point in itself so much as it is a way forward to the next great chapter in the series.