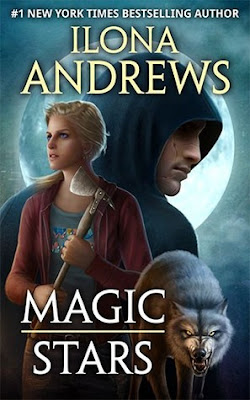 Derek has separated from the pack, the werewolf is one of those who have now joined with Kate and Curran and their independent organisation. An organisation – and business – that doesn’t tolerate the slaughter of families

Julie, Kate’s ward, is certainly not going to stay out of the action either – even as their investigation reveals horrors they never expected, backing down is never an option.

It can be said I did not react to this news with particular grace and maturity.

In the past I’ve been wary of spin off series because they don’t always work – the main characters are such a major part of the world that without them it falls flat. This world has carried the different spin off stories so well because, even while Kate and Curran are the most amazing, epic characters imaginable, the other characters in the series are fleshed out enough, developed enough and interesting enough to easily carry their own stories

Still, I was surprised that this series follows Julie – Kate’s magic-sensitive ward/sort-of-foster-daughter – and Derrick, the werewolf who has entered Kate’s shadow for a long time now

Like most of the characters in the main series, they have been developed, they have had their own storylines, they have their own histories which are quite involved. But for so much of the books these two have been very much extensions of Kate and Curran. Which makes it interesting that these were the ones chosen to expansion – I feel almost like the author has decided that they need more attention to show that these characters are just as awesome as everyone else.

And this book does an excellent job of taking both characters and establishing them as individuals. We have Derek’s history, how his path has changed so much with him being involved with Kate (but also, just as important, with his life before Kate) and how his face being scarred changed his life again (we also have an excellent look at the ableism Derek faces – with a woman assuming he will be grateful and servile towards her because his scars mean he should consider himself “lucky” that she’s paying attention to him at all). Woven into the story is Derek’s history, nicely setting him up as his own character and co-protagonist in this series as well as being a lethal fighter who has been forged through terrible experience

Derek’s story is very much a disability narrative. Even though he is physically very capable still, his entire life has been changed by his facial injuries; the way people treat him has changed a lot, his old career has ended and he now finds that career path completely closed to him. His whole identity changed from the man he used to be to the Man With Scars which affects so much of his life. His professional life, family life, home life and romantic life have all been vastly derailed by the scarring to his face and voice.

And Julie – it would have been easy to make Julie the magical tool which is part of what she has been so far. The girl Kate is desperate to protect, the girl with the useful magical tool – someone to be sheltered and shielded (which is understandable from Kate since she is the mother figure). It would have been easy to develop her magic (and it is interesting to see that develop) and make her the “ultility” character to Derek’s combat monster. But Julie can hold her own, is more than dangerous in her own right and certainly doesn’t need Derek to shelter and protect her

I also like that Julie is not just following the path Kate would want for her – and that she knows a lot of things that Kate has tried (poorly) to keep a secret from her for her own good. In some ways, she’s even more pragmatic than Kate since she doesn’t carry Kate’s hatred and revulsion of Roland and is willing to explore – and embrace – new options. She’s very much her own person – with her behaviour shaped by her experience on the streets as much as by Kate.

Establishing these two characters is the main thrust of this book, I think, and it does it excellently – taking them both out from under the shadow of Kate and Curran and more than convincing me that they are quite capable of carrying a series on their own – a series I really want to lead

Of course, all of this happens against the backdrop of the awesome and original world that has been created here. It’s such a wonderful mash up of magic and fairy tales and technology and mythology from around the world with a heavy dose of dystopia and just a hint of high fantasy and all with the excellent research (contrary to many series, there’s far more than just raiding foreign cultures for woo-woo that goes into this book) that means I would read people just going to get coffee so long as it happened in this world setting.

While the larger Kate Daniels world is very racially diverse, this book is not: Derek and Julie are both White. There are some POC they meet in passing as they investigate the case in this book, but “in passing” pretty much covers it since there are only two main characters. I suspect the series in general may be more racially diverse just because so many of the major characters that are part of this world are POC. There are no LGBT people – and  I don’t expect that to substantially change.

But, really, why would you? The Kate Daniels Series is awesome and should be read anyway.