Brighter than the Sun (Charley Davidson 8.5) by Darynda Jones 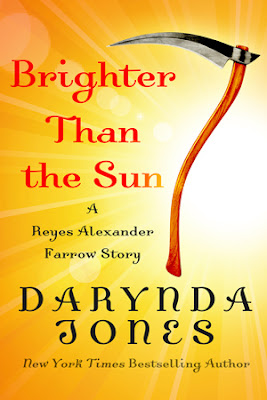 We’ve seen Charley Davidson’s story continue through the books – now we look again at these events, but from Reyes’s point of view.

This is a book that largely recaps a lot of what has been spoken about and touched upon in the main series. Often I’m not a fan of that when it comes to short stories – or long stories for that matter. Retreading old ground too often feels like some kind of broken money-grab, leaching a book out of a series when it doesn’t really have an original book there. It has to bring something new to the proceedings, to the series – it has to bring a perspective that is actually useful and novel

The perspective this book brings is Reyes point of view

The actual events of the book are ones we’ve seen before. We know Reyes’s history – we know he was repeatedly abused by Earl, we know he was controlled by threats to his sister. Everything he endured is something we knew about. But seeing it from Reyes point of view helped explain a bit more about him, especially since he’s always been the awesomely powerful one Charley has turned to

Here we see what she brought to him – he isn’t just her protector (and frequently abusive controller). He relied on her on her light and on her presence to get him through the dark times.

It also brings some insight into him and his views. He’s always been ridiculously, impossibly beautiful in a way that is full of annoying Paranormal Romance tropes of the incredible love interest who just can’t be resisted. Well here’s the dark side – here’s Reyes, ab to sense people’s emotions and always feeling that endless, hungry all consuming lust. It’s a burden on him, a constant attack on him, a pressure that always drives him down. From there his appearance is never an asset to him, but a source of constant pain. A source of him hardly ever being able to have real relationships with most people.

This is also coupled with his knowledge of who he is and what he does and the inherent conclusion that he is damned, tainted and awful. Which, of course, he is in a way – he was created entirely to help the invasion of Earth and Heaven, he was created to co-opt Charley, her mission and her power.

He chose to reject that, but it took a lot of walking through fire to get there.

We could always infer Reyes’s story – but there is definite value to seeing it through his eye sand his experiences, it helps explain him a lot more

Though it certainly doesn’t justify him, it does help explain him.

I also have to say I’m somewhat impressed by how the abuse is depicted. There’s no doubt how he is abused, how horrific it is – but the depiction is not graphic or brutally detailed. They don’t flinch from it but nor do they feel the need to dwell on it with excessive, painful triggering detail. It’s a well balanced way of having a character suffer extreme abuse without forcing the audience to go along with all the details

Inclusionwise we do have some Latino characters as well as a Reyes. A brief side gay character (who basically exists to be tragic and droomed) though there’s also a major point that Reyes, who can see if people are going to hell, is very clear that no one goes to hell for being gay. The main people in Reyes’s life – his sister and Charley are women. Ultimately this is Reyes’s very personal story so any characters – marginalised or otherwise – beyond him are going to be very small roles.

I still have many of the same issues with this story as I’ve had with many like it. Much of this could be inferred, much of it was a retreading what we already know. It adds something but that something is among a great deal of things we already know.