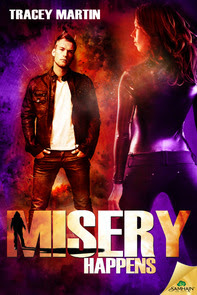 Jessica is now facing the final chapter of her story – an ominous red sky signals the opening of the Demon prison – the first demons, the progenitors of the Furies and a terrifying force that could literally destroy the world.

Prophecy points to one small group of people who can close the prison and save the world – and chief among them is Jess. She has a lot to learn in very little time as well as a powerful magical artefact to find.

And just when she was getting her life together and finally deciding what she wanted from life: just as her life comes under unprecedented scrutiny – and hostility.

I generally really liked this book and the conclusion of Jess’s story – which came to an excellent conclusion. There are only two issues that pulled it back

Firstly, around the middle of the book it all kind of wobbles; the book kind of pauses. I can see why it wobbles and it makes sense for it to wobble but that doesn’t necessarily make the wobble. Basically there’s a tense moment in the middle of the book where everything is on hold. Everyone is researching, everyone is waiting for the bad guys to make the next move, everyone is tense, everyone is fearful, everyone is worrying about what will happen next, everyone is worrying about whether they’re ready or how their lives will change. Everyone is in holding as preparations happen. But everyone – specifically Jess – isn’t actually doing a whole lot. Even though I completely understand why they’re not doing an awful lot, it still feels frustrating – it feels like we’re gearing up to a major ending without actually heading for it, more like we’re waiting for a major ending to land on us. In some ways it’s the same issue I had with the last book – we have lots of preparation for stuff to happen without it actually doing so.

While I’m not a fan of what it does with the plot, I do like how it allows for a lot more focus on Jess, especially on her last outing. Here she can look at the remaining issues she has with being a satyr (including addressing her brief wish to turn Lucen human) as well as coming to terms with what she wants against her constant push to want what she thinks she should want, what is deemed acceptable to want. Her secrets exposed to the world, Jess is put in a position to look at her whole life and decide what she wants out of it – while at the same time also (with Lucen) recognising that it’s ok to have got as much wrong as she did. It was ok not to be perfect, it was ok to need to grow. Her relationships, her positions between the Gryphons and the Preds, her relations with friends and family are all examined and put in their place as Jess makes major decisions about herself and her place around them. No matter what ever else ends in this book, her personal story has reached a massively satisfactory conclusion

I am not happy about the woo-woo that drops that suddenly makes Lucen capable of monogamy. It seems to fly in the face of all this acceptance and still give her an out so she can have that conventional happily ever after even after she’d already accepted she doesn’t need it.

This part of the book also examines several deep issues with hugely potential storylines that were excellent on the face of it and, perhaps annoyingly, would have also been excellent to develop… which of course we didn’t have time to. Like the Mages throw in some interesting curve balls this book, and there’s a huge debate between magical hatred and prejudice that would have been fun to examine as well as Jess’s own position with the press, people, Gryphons and her own family. What was done was excellent – excellent enough that I think they would have been interesting to follow up.

The second thing that I wasn’t a huge fan of was the ending… it felt rather anticlimactic. Perhaps it’s because of the people who died in it, the cost that was paid or the nature of the battle with the enemies, but it didn’t feel… epic. Powerful and strong – but epic? The big bads just didn’t really sell me as big bad, especially considering several books of utterly huge and amazing build up going on.

Diversitywise, this book is good for having a decent number of POC and LGBT characters – but not for placing them prominently. We know several Gryphons who are POC as are several Preds but they’re not the front line major actors and some of them require you to remember they’re POC from previous books – not all, certinaly, many are clearly labelled as such, but some had me checking my notes on a previous book. But the core characters who are on the front lines are, to my recollection, White. Similarly Jess’s best friend is a trans woman, but you have to remember that from a previous book (where it was depicted clearly and without negative tropes) and technically all satyrs may be bisexual – but that’s more of something we kind of, sort of intellectually acknowledge rather than us seeing it actually depicted. They’re there, they’re not problematic and they’re not tiny in number – so there’s no real problems there; just lack of prominent influence on the plot or present.

This is the last book in the Miss Misery Series and it either succeeds immensely or concludes… adequately, depending on what you’re looking for

If you’re looking for the conclusion of Jess’s story, the end of her tale, her development, her growth, her passage from the bitter misery addict of the first book to a successful, fulfilled powerful woman who knows what she wants and is finally in a position to own that and aim for it then it succeeds immensely. It has everything you could possibly want. If you’re looking fo the conclusion of an epic battle for the future of the world, saving countless innocents from a devastating apocalypse of horrendous proportions through epic heroism and amazing powers… it’s is adequate. Everything is concluded if not necessarily in the most amazing way. Perhaps the clue is in the name: This is the Miss Misery Series, not the Saga of Gryphons and Preds and it has done exactly what the name suggests – tell Miss Misery’s story.