Raise your glasses, it’s time for another episode of Containment!

So Alex and Sabine are released from quarantine to find a lot of angry protestors upset that the National Guardsmen who went into the Quaratine zone are all being hidden from them. Sabine takes over, is very gracious to Captain DamnFool ad very honest with the press, showing them the guardsmen are infected

Of course, to Alex and Leo this is just further proof of her evil evilness. See, a CDC official who knows how to dispel panic during a crisis is just evilly manipulating the press! Evil!

Alex has a highly improbably memory of what looked like a corporate logo on some blurry papers in a corner of the photograph of Leo’s dead friends. CONSPIRACY. They send in Jake (who totally has nothing better to do being the only cop in the cordon and pursuing the dullest of romances with Kate) who finds all “evidence” destroyed. CONSPIRACY (or looting). This leads to a rapid chain of presumptive leaps in which the side I’m supposed to be rooting for decides that officer Meese who fell in the Cordon is totally evil and so is the Chief. Everyone is evil who actually focuses on curing the plague!

So Alex confronts the chief with next to know evidence and because it’s Containment, it works – and the Chief is basically a good guy who was bamboozled by evil evil Sabine. With all this “evidence” Alex confronts Sabine and forces her to resign. Because that’s definitely what the team need 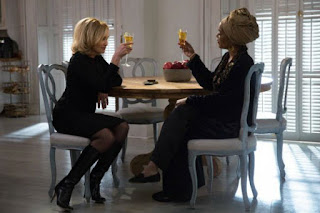 Inside the fence Kate is being quarantined and all mopey but takes time out to attack Vincent for being super evil and daring to talk SCIENCE in the face of a plague. How very dare he! And he totally didn’t pause all his efforts to cure the disease to answer her inane and ignorant questions (and using more SCIENCE!) Why, he made her feel like an annoying girl asking stupid questions!

In anyone else, that could have been a moment of self-awareness on her part.

In the closing scene she coughs blood. I’m supposed to be sad. This is my sad face. Honest. Yes it looks a lot like my bored face.

To characters I don’t want to strangle – we have Jenna and Suzy being awesome. Teresa is having her baby, Suzy thinks she’s pregnant, Dennis, the father who ran out on them, comes back all diseased and through it all Suzy and Jenna are awesome with excellent character moments, great pep talks and generally just being all awesome. They’re the reason to watch this show.

And for some reason Jake is clumsily inserted into this scene to delivery a baby which is a hidden skill he apparently has.