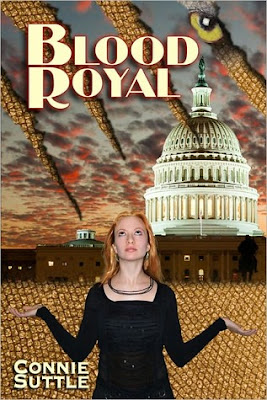 Now I’ve read a lot of awful books lately – usually because they’ve had some social justice fails that are inexcusable like the House of Night series and the Shifters series. So very inexcusable

This is not the case with this book (don’t get me wrong, it’s not exactly stellar on that front), this is terrible because it reads like it was written by a 10 year old. It has that level of complexity

This has been the problem with this series for a while now, I’ve complained before about the utter simplicity of the world setting, especially as they’ve expanded too many alien creatures and worlds. I’ve also complained at the utterly simplistic lack of conflict in the conflict with such terribly un-nuanced abilities like being able to “smell” evil (and, of course, the evil being so very very very evil and lacking in nuance or development that you can just kill them). This is the tone of this book. The evil is evil and you just have to kill it (it has no reason to be evil. It’s just evil). It has no subtlety, no difficulty in identification. It’s just evil.

This book takes this whole child-like simplicity and takes it tenfold further.

Firstly there’s Lissa, Supreme Queen of Mary Sues. Oh dear gods she is. And this Sue-ishness is the core of why everything in this book is simple to the point of boring. There are no challenges, none at all. There can’t be. Lissa has super powers, powers that completely eclipse everyone and everything. We open this book with a desperate struggle where the forces of good (and their amazing super powers) are being completely overwhelmed until Lissa arrives and destroys nearly the entire army by herself. There are creatures that are literally destroying entire planets which Lissa completely wipes out in her free time between dinner dates. And the closing scenes of this book involve Lissa pulling off completely unexplained god-like feats with no damn explanation at all. She just ZAP decides the bad guys can no longer have their powers – and lo, entire species across the galaxy are fundamentally changed in terms of magic, physical abilities and lifespan.

Where she gets these powers? I don’t know. And it doesn’t even matter – it’s just a ridiculous over the top tool. Even if you could justify your protagonist having these powers, it’d still be a bad idea because it destroys any kind of tension in the plot. Sure we generally expect the protagonist to win, and the genre is full of protagonists who have awesome powers who we know will win in the end – but when Anita Blake pulls another load of super powers from her vagina, there’s at least an attempt to present the conflict as an actual conflict with the suggestion that Anita COULD lose, that there’s an actual fight

Well, of course she’ll have interpersonal conflicts, right? Nope. She is Queen of Sues. Everyone loves her. Everyone. I’m not kidding here. Not one person doesn’t adore her. Half the cast wants to marry her, the other half wants to be her parents or family. They love her. All of them. Unreservedly, without the tiniest shred of criticism or seeing any flaws or issues with her. She is universally adored from the very second when people meet her. And it’s boring. You can’t have a story that looks at character relationships or development when everyone starts as fawning fanboys. She even gets a 21 gun salute from the President even though no-one can publicly explain what she’s actually done. Can you imagine that meeting? “We need a 21 gun salute for this lady with no last name or legal identity for doing stuff I can’t talk about!”

But there’s more gross simplicity: the world building. This is something, again, I’ve complained about before – with Lissa happily jetting about alien worlds and finding them… not even remotely alien. Again, Lissa would find more culture shock and difficulty navigating if she went to modern day China or Argentina or Norway. These alien worlds simply have no alien elements. These alien beings are largely just human with shiny powers

This is compounded this book with time travel which, again, pretty much fails to imagine how Earth would change 300 years in the future. And it shows how little thought has gone into it – Lissa buys a map for crying out loud! Sure it’s an electronic map but the fact it appears on a screen doesn’t change that maps are nearly extinct now! People have “tiny communication devices” like mobile phones – but even a brief look at trends would see our mobile phones have been getting bigger because we expect them to do way way way more things than communicate. It’s just so lazy! It’s just lacking anything resembling imagination or development. Look at the way the world has changed in the last 300 years! It’s mind boggling so little will change

So what about the plot?

What plot? For the first half of the book Lissa decides to play servant because, despite all her super powers she decides she doesn’t know what else to do other than cook for people. Why does every book in this series have Lissa passive aggressively cooking for people?

And the rest is one giant introduction. Ye gods so many characters. There are more characters in this book than in Anita’s Little Huge Black Book and it took Anita a bazillion books to develop this cast, not 5 – and most of them were introduced in this book

Can we begin to count them?

This isn’t even all of them. No, really, there’s more. I have no damn clue who most of these people are. I lost interest in which particular fawning fan-caricature each one was long before the end of the book.

This is really common in the genre and this series in particular can have books with dozens of male characters and one or two female characters at most. So, when we have women with multiple male partners (and nearly always women) it seems progressive – but it’s also another way to have all these men partnered off in nice heterosexual relationships while still keeping the number of female characters to a minimum. We have one family unit with 2 women and their 11 male partners – and while we can say “you go girl” and cheer them for loving freely and as they wish, we also have to realise this means we have 11 male characters there – and only 2 female.

One thing that has improved is at least Lissa has held on to her anger at how terribly she’s been treated for the first time in five books. About time! It’s just a shame that it took so long and she still ends up all happy with them in the end. And we get there through ridiculous simplicity again – like Gavin the uber jealous lover? Has his jealousy magically removed. Convenient, isn’t it?

We do have some POC – but again I ask you to look back at that freaking list. Very very few of those characters are POC. Dragon, Crane and Dragon’s sons Drake and Drew are all Asian (Dragon and Crane are shapeshifting Asian martial artists with dramatic tattoos. Yes, really). We have a couple of minor characters in the vampire council – but the majority of these characters are White. Or blue aliens.

We have some gay characters. The minor gay characters who were servants and best-friend-supporters in the last book have been reincarnated to be… minor supporters and best friends in the present. Her GBFs have been rendered immortal – and they’ve acquired NEW GAY SERVANTS. What are all chefs and housekeepers gay now? Gay servitude is a terrible trope that this series loves to perpetuate.

Returning to plot – the ending is ridiculously simple. From deciding to kill hundreds of people because they’re “evil”, to decimating races (because EVIL) to enslaving entire species (because evil!) to then deciding to just relocate entire alien populations to a planet because that won’t cause any problems at all. Oh and this world has one half permanently half in darkness and the other half in permanent daylight. And this is a good thing.

I refuse to believe that the author lacks knowledge, intelligence and creativity to this degree – this book was just phoned in. It has to have been.