Containment, Season 1, Episode 9: A Kingdom Divided Against Itself

Another episode of Containment. I am ready.

So last episode Alex grabbed Sabine’s hand so the leader of the quarantine and efforts to stop the virus would be uselessly quarantined and ineffective. On top of this everyone decides getting her the ability to communicate with her teams is just unnecessary for most of the time.

Alex is pissed at Sabine because she totally knew what was coming. I mean she had all the resources and plans ready for containment, media blackout et al from day one. Why it’s almost like she works for a huge organisation whose entire purpose is to be prepared for a plague outbreak and has contingency plans in place just in case such an outbreak happens.

What was her job again? Oh yes, she works for the CDC.

I’m going to run out of drinking gifs. 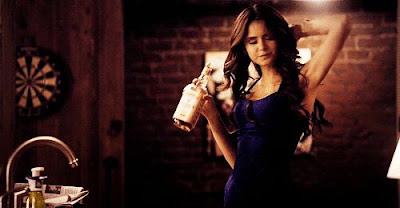 Sabine makes a big speech about viruses killing anyone and she does everything she can to stop it (I actually think there are flaws in her speech because while viruses do ignore politics, class, race etc the conditions and reactions and responses that exacerbate them certainly do not).

Alex thinks she should have said this on day one.

So, Kate and Jake continue to be Kate and Jake. Nothing to see here. No really, it’s an effort of will that stopped me fast forwarding through these scenes.

There’s an ever growing protest in the streets as hordes of people look to try break out of the cordon complete with random guys on bikes bombing shit. The National Guard finally decide to consult Sabine who interrupts her happy-family comparison talk with Alex and she points out that they’re to shoot people who break quarantine. Since this is why they were called in. Of course, being Containment army guy decides that, in a plague situation, the CDC’s instructions should be treated as mild advice.

Instead he decides to send his men into the containment zone.

This leaves Alex giving a huge pep talk to Sabine finally, belatedly realising she may actually have a clue what she’s talking about. Y’know her being the expert and all

At the riot, everyone’s pulled in: Kate and Jake because some of the kids are taken by presumed parents wanting to leave. They run around looking for them and Kate finds one – who is injured, bloody and possibly infected. The child dies in Katie’s arms and Jake sees her – woe Katie may be infected. Like I'd be that lucky. Also showering works better when not clothed.
Suzy, Jenna and probably-Sam return Jenna’s old work to hide out. Suzy is moody and stomping around and decides she’s going to join the jailbreak as well. Suzy’s broken up about Dennis leaving (she was having an affair with him, he’s married oh and she may be pregnant). Jenna calls her out righteously and then they sit down to have a heart to heart while Sam does the cleaning. Jenna gets a medal for being She Who Has Any Sense On This Show. Their friendship is quickly restored to something I can cling to again

Alas Bert, one of the few characters I care about, is also hurt.

Teresa and Xander also get caught in the middle of the riot heading to her grandparent’s house and get split up because convoluted stupidity. She falls over – but Xander is afraid he may have been infected and is afraid of touching her to help her up. Which means they have to camp around her protecting her. Jenna finds them and brings them back because seriously, people? Pregnant camping on tarmac?

The National Guard move in and achieve very little except possibly infecting some of them. Well done.

At least he calls Sabine to basically admit that she was right. She rather awesomely rubs lots and lots of salt into those wounds. And I’m right there with her. Alex has a silent judgy face but Sabine is firm. Also the arsehole deserved it.

Alas, we have to catch up with conspiracy Leo who has a friend in the NSA who is willing to put her entire career in jeopardy to check out info he found out but they can’t. Of course he does.
She finds that the “patient zero” called  a “protected” phone in Nantucket – that would be Sabine. So just when we’re starting to see her as not the enemy for 5 seconds the show has to remind us that she is

Also, why is it that several of my shows seem to be such excellent fodder for drinking gifs? Discuss (it will be more interesting than Containment