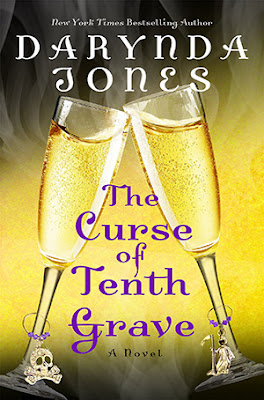 Charley has a secret. And it’s a doozey. She knows what Reyes really is, how he was created – and she has no idea if this revelation means she can’t properly trust him, certainly not in protecting their daughter, Beep

It’s only made worse by the distance that seems to be growing between them.

Of course she can never focus on one thing – she has a homeless girl facing a curse, a prosecutor who doesn’t like her very much who wants her to prove a guy innocent and her supernatural exploits appear to have gone viral on the web.

I believe this book to be something of transition book. And that’s not a bad thing. In the last few books the meta of the Charley Davidson series has morphed into something incredibly huge and overwhelming. This seems ironic for me to say after several books of saying “more meta! More meta!” but the last few books we’ve had the birth of Beep and her godly future, the revelation of Charley and what she is, the revelation of Reyes and what he is, the introduction of many characters and concepts. We’ve had gods and dimensions and ALL THE THINGS. So much, so very very very much.

So having a book where the meta is largely confined to the end helps us get back to Charley and her relationships and her standard zany shenanigans to help pull back from the meta. Don’t get me wrong, I love the meta and the epic but I also really really love Charley’s silliness. I love the fun of his series. I love the humour. I love Danger and Will Robinson. I love every single conversation she has with Cookie. I love her superlative irrelevance

Yes, that’s not interspaced with reminders that she is uber powerful and even epic moments where she does things like challenge the Archange Michael to his face because she is DONE with his shit AND his boss. The combination works. It really really works and it’s fun and hilarious and awesome. I love this series, I will always pick up another book in this series with utter glee

Of course there are problems – including the habit of these books including ALL THE THINGS. So many storylines in one book! But this works more in this book because the meta has been largely pushed to the end of the book and the many storylines are more of the point. This is a shenanigans book, so bring on the shenanigan

Still, between the runaway teenager, ongoing questions about Charley’s relationship with Reyes, the continuing safety of Beep and the murder mystery that Charley’s investigating (with added investigating of the person asking her to investigate). Oh and the totally unnecessary child support plot line. And the weird storyline from Charley’s work with the peace corps (if I didn’t read my notes I’d even have forgotten this storyline!) There always seem to be just one plot point too many.

And at the end we do have a return to the meta and, I’m glad to say, a quick removal of the whole secret building that had started between Charley and Reyes because I really didn’t want to face another lot of romantic tension based on a rather dubious set of conflict. I’m glad to see all of these issues being there for a book and then being addressed by the end. Along with a whole lot of epic and setting us up for a full on embrace of the ever more powerful metaplot that is building.

So, plotwise, this book worked. The world building is fun, original and definitely growing which I’m definitely loving as it gives far more depth to the fun that so characterises this series. It goes without saying that the immense humour of this series continues (I love how these characters work together).

I could really do without Reyes ever-escalating angst and pain. He has a tragic past. We get it. Stop doubling down on that, please. And, honestly, the least interesting part of this series is oh-how-steamy-hot Reyes is. I get it. He’s hot. MOVE ON. You’ve been married with him for some time, you’ve known him for longer – at some point Charley needs to be able to look at her husband without being concussed by his sexiness.

Of course this series is almost defined by the awesome relationships between women. No matter how much Charley loves Reyes, Charley and Cookie will always be the stars.

In terms of POC, we have Reyes who, in addition to being god, son of Satan and full of so much power, he is Latino which is not erased even if it isn’t a major informing element of his character. We seem to emphasise his ethnicity in his cooking while his being orphaned from parents seems to separate him in terms of language and culture. We have Garret, a major character and a Black man from the beginning of the series who doesn’t play a huge role in this book. We also have minor POC – an Asian FBI agent, POC in the orphanage which Charley investigates

We have two LGBTQ characters, Peri who is a minor recurring bisexual character who Charley uses as a safehouse. She’s in a relationship with a man who wants monogamy… only in regards to men. She can have sex with other women (she doesn’t but that’s their relationship). See, an open relationship would be one thing but this gender specific openness seems to feed the idea that bisexuals can’t be happy with just one partner. We also have a random gay man who is “gay as a blue jay on a sunny day” and has his sexuality referred to as a “lifestyle”. Random caricature dropping is not inclusion.

We do have some interesting moments looking at disabled characters – we have the ongoing inclusion of Quentin a deaf character – who isn’t really present in this book but seems to be definitely informing more of Amber’s storyline. I do wish he was a more regular presence but he seems so tangential to the rest of the series. It’s a shame. We do have a very heartfelt look at a terribly abused mentally ill person as he passes his life through Charley. It’s heartfelt, it’s sympathetic, it’s powerful but it’s not exactly a character