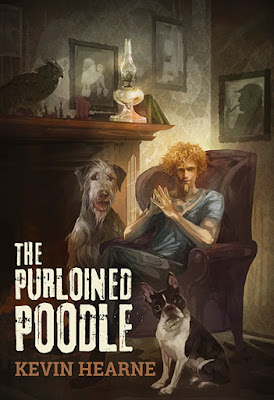 I admit that when I picked up this book I had mixed feelings and expectations.

On the one hand, it’s Kevin Hearne (who we love in unreserved fanpoodling glee). And it was a book about Oberon, who we definitely love. So what’s not to like…

…well, animal companions can be fun and cute and Oberon definitely adds something awesome to the Iron Druid Series… but a whole book around the cute interlude? Yeah that can get… annoying. Also, when it comes to short stories, I do wonder what the point is of many of them. Sometimes it’s for fun, sometimes it’s to explore different elements of the world that haven’t otherwise been touched. And sometimes it’s a way to hold fans upside down and shake them until the loose change in their pockets falls free (also known as The Charlaine Harris method).

Yet this book worked.

It worked because it was balanced. Yes Oberon is a dog, but for the most part he thinks like a human. His narrative is not annoying or impenetrable – because he has spent several decades with Atticus learning how to communicate with humans and among humans. His mind set isn’t frustrating and impossible to follow or awkward or clunky.

At the same time we still have several cute moments that really do convey Oberon’s doggishness – yes Oberon is focused on his mission. But he’s a dog – and he has a low attention span. And a loathing of squirrels. He’s food orientated and he still has absolutely zero concept of time. He has next to no colour vision (or awareness of ethnicity making racial inclusion somewhat fuzzy though there’s at least a Latina police detective) I like this combination of not making Oberon so doggy that he comes off as a gimmick, but also making sure he doesn’t just feel like a human in a fuzzy suit. It’s an excellent balance of making him accessible without making him bland and generally keeping it excellently balanced.

Also I do like the nice little insert like how very very unhealthy Oberon’s endless sausage filled diet is actually terrible for dogs and they need druid magic to live on the high fat meat they eat. Or how Atticus manages to train Oberon with lots of knowledge. Or Oberon’s endless love of media references

It also makes the short story flow nicely. After all an investigation involves lots of awkward questions and difficult situations and asking invasive questions. Elements Atticus does – which Oberon generally doesn’t care all that much about. It all runs smoothly and generally focuses on Oberon’s interactions with the world rather than trying to make a fun little plot investigating the theft of pedigree dogs.

Though I do like how it fits in with Atticus trying to investigate while his movements can also be so easily tracked – how do you explain magical transport or taking to animals or all the other tricks that Atticus can pull off. I like this being included, even as an aside, because this is the kind of thing that is often being brushed over when woo-woo enters criminal investigation.

If there’s one element that was a little off it was how Atticus decided to rebuild his wealth – by carefully binding gold beneath the Earth and pretending to find it – while being careful that the resulting gold rush doesn’t cause any environmental damage. Which is nice – but this gold is a Conquistador haul which has been hidden and not found. That means it has historical and cultural significance and Atticus appropriating the theft of the conquistadors isn’t harmless of victimless.