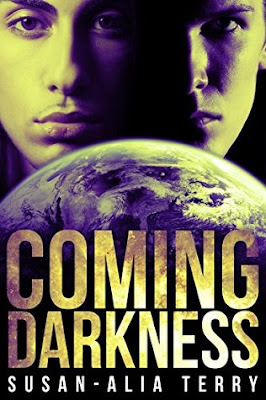 Lucifer has a good life. He is respected and honoured by the supernatural community, he has a home, a mate and great taste in clothes. He has family issues, of course, but he can work round them

Until the family comes to him looking for help. God is gone, something is afflicting the world and a whole new and unknown powerful enemy has appeared seeking to annihilate His creation.

Lost in this fight, he leaves his lover, Kai to try and find his place in the world without Lucifer… and to realise some harsh truths about what that relationship has actually done to him.

This world is huge and fascinating and all round incredible.

We have the archangels and Lucifer. They have great, separate personalities and a lot of family drama. Lucifer and his fun and his pain are almost as epic as the poker match he plays (which is beyond epic)

We have a world full of supernatural creatures, including werewolf packs and vampire clans that all have their own cultures and personalities and histories. We have the underground supernatural city with its own awesome history and legends and mythology and politics with the different factions pushing their own agendas

And we have Kai, lover of Lucifer, dangerous vampire assassin overshadowed by his lover and trying to find his own identity and respect separate of that.

We have a city that treats humans as possessions, food, tools and toys and the experience of one woman being dragged into it.

We have demonic contracts and politics and magic and then on top of all this we have storyline about the end of the world which has amazing, powerful statements about free will and analysing what that means and a whole concept of god and supreme beings I’ve never seen before and absolutely love for the implications of it.

There is so much here, so many characters, so many conflicts and twists and turns, so many different concepts and so much excellent, deep, layered world building all told with writing that really works to do it justice in terms of pacing and exploration.

In this rich world there is an issue though – it’s huge and there’s almost too much for the first book. As an introduction book, we could have focused on Roberta and learning about the underworld. We could have been introduced to the characters. We could have seen more of the archangels, learned more about the mythology and past of the world, seen more of Kai and Lucifer’s relationship before they were split up almost instantly, seen more of the vampire and werewolf clans and their society. There was such a lot here I wanted to explore, but we had the coming darkness story dropped in almost instantly which rendered so much else moot. The darkness, the apocalypse and the truly fascinating take on the idea of free will and order is really excellent. It’s a deep meaty plot

And it didn’t fit. This plot line is awesome. I deserves our full, undivided attention as this whole world with all its massive complexities and differences and deeply troubled and problematic characters are all faced. Because this VAST plot line with HUGE implications suddenly arrives, then a lot of the plot lines feel… irrelevant? Like, the world is ending, why am I following Roberta’s story? How is she remotely relevant? The world is ending, why do I care about power plays in the City? Why introduce the werewolf/vampire council?

The awesome end of the world both overwhelms the equally amazing introductory plots. Both plot lines are amazing. Both plot lines are stories I want to read and explore in huge depth. But there’s not enough room for both of them. The end of the world feels neglected and the world building feels lacking in proper exploration especially since we have a society and characters who clearly indulge in a lot of outright evil (slavery, genocide of some species, Kai’s love of torturing certain groups).

Aaargh, I stress again that everything here is awesome. But it’s three books worth of awesome. Not one. The fact that all of it is so awesome is what makes it so frustrating because none of the awesome gets enough attention to be as truly, epicly awesome as it deserves.

We do have a couple of same-sex couples and several hints of more. The main couple in the book, despite us not seeing them together very much (and it’s sad that we never actually get to see their relationship, really – it’s something that is told rather than shown) is Kai and Lucifer. We also have Te, the second most powerful character in the books and perhaps the one with the most presence after Kai and Lucifer is also attracted to Kai.

Unfortunately there are elements that stop me celebrating this to the hilt. Firstly, one character pretty much dismisses sexuality all together and just hand waves everything as “just sex.” It completely removes identity and seems to be backed up with the rest of the cast completely avoiding any kind of identity labels. Reducing LGBTQ sexuality to “just sex” is reductive and denies the existence of actual LGBTQ people, turning us into a sex act rather than people.

The main relationship in the books is also revealed to be extremely predatory, has no concept of consent and is generally full of problems. There’s also another relationship where a cis man is given a vagina now because of their gender identity, choices or expression – but because his lover wants him to have one. This reeks a lot of fetishism – something which deeply plagues trans people; to have an almost form of transitioning happen just because it gets someone else off. More, this character is referred to by a number of clear buzzwords like “mincing.”

Tip to any author – never, ever, ever refer to an LGBTQ character’s walk as “mincing”.

It’s a shame because the main couple of Kai and Lucifer would be awesome if it weren’t for the predation and lack of consent and is genuinely shown, initially, as loving, caring and passionate. But they’re hardly ever together and it is badly compromised by later revelations which sit badly when also added to Te and Stephan’s trainwreck.

We also have a large number of POC. Kai is Persian and the leader of his vampire clan, is “brother” is a vaguely described “African”. Te, the powerful ruler of the supernatural city, is a Black man and a being of great power and influence. The Archangel Michael is described rather ambiguously as “olive skinned”, but several leaders of the vampire and werewolf clans are described clearly as POC. Of course, of note is that all of these supernatural beings are divorced from human culture – or any human culture that isn’t a generic western one which is a shame given their sometimes clearly defined histories, ethnicities and nationalities (which is a nice touch to include). In fact, beyond he ambiguous archangels, the only actual prominent white character I can think of is Roberta.

Which brings us to female characters. The most prominent characters in this book are male – which is a shame considering the large scope of the cast. But there are several powerful female werewolves and they have an excellent matriarchal society that flies in the face of so many terrible werewolf tropes that I applaud

And we have Roberta, a fat woman faces down shame for her weight, a woman who is past her 20s, a woman taken out of her element and forced into a terrible, horrendous situation as a human surrounded by supernaturals who consider her nothing more than a thing. Her story could be fascinating, her growth, her struggle – some of which we’ve already seen. She is determined, stubborn, yet not a fool. She bends when she has to, but isn’t a pushover with it and has a quiet strength besides. My only problem with her story is it appears to be fast forwarded. Again, like so much in this book there’s just not enough time to truly develop her and her situation which means she adapts to her position with incredible, almost unseemly, swiftness.

This is the often repeated summation I have to make for this book. It is great. Its world setting, its stories, its characters – all of it is truly great. The writing is great, the plot is great, the twists and turns are truly great. The only thing holding it back from being toweringly awesome is how overfull this book was. It needed more space, more time to develop all of these wonderful ideas to the full. Everything in this book is too excellent not to spend more time on it.