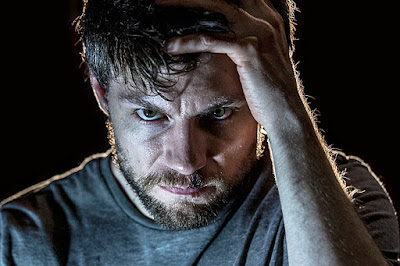 This isn’t an especially Kyle heavy episode as he hangs more around the edges. But there are a lot of poignant moments as he gets Amber back in school and tries to reassure her fears. Having found her pictures he knows she remembers Allison being possessed and wants to desperately reassure her and protect her even as Amber is a lot more cynical than most children her age. It’s hard and quite sad to see that painful knowledge

Kyle does find Allison- she’s checked herself in a Mental Institution (with standard mentally ill people as wallpaper) – and no matter how he appeals to her, she won’t leave. She says it’s up to him to raise Amber. This is painful but I can see this – how would you deal with knowing you hurt your own child, knowing you did it but not knowing why, what triggered you, what set you off… or if it would happen again. What can you do?

Ogden and Kat leave town – but not out of the influence of Sidney who gives them a new, ominous mission. Ominous keeps happening as we come close to the season finale

Alas we have to check in on Anderson. He seems to have landed on his fee with Patricia who doesn’t deserve such an arsehole in his life. Equally he has Giles who continues to support and protect him even as Anderson shows he has absolutely no control at all. Seriously this man needs to lose his fawning supporters as of yesterday.

This lack of control Includes attacking Sidney in full view of the council looking to replace him (this didn’t help his case). And attacking Patricia’s son (yes the kid’s an arsehole – but Anderson defaults to attacking verbally or physically anyone who refuses to fit his world view) which goes down especially poorly with Patricia since her ex was abusive.

He accuses Patricia of letting Sidney and her son (who is hanging out with Sidney) play her. Which, again, shows his arrogance and inability to see what’s in front of him. They’re not playing her – they’re playing him, his arrogance, his temper. In the last 2-3 episodes we have seen Anderson blow up, what, 3, 4 times? His temper is predictable. Sidney doesn’t have to isolate Anderson from the town – he only has to gently poke him and watch Anderson go rabid. He’s predictable and he’s easy and unless he steps away from the mindset of making everything about him, he will continue to be used and fail.

He even tells Kyle he is jealous of his ability – which has been evident for a long time. Him seeing this may be the first step on the road to him being reasonable – but equally it seems to be another tool to reeling Kyle in again, to get Anderson back in the sight of power. Getting him back in control.

Everyone really needs to cut him loose.

Megan’s storyline is the one that crashes most tragically though.

She begins, hurting devastated and self harming, falling apart in a scene which is more powerful and artistic than it is emotional and human.

She’s in such a bad place that even Kyle drops in to check on her – just like she did on him. And gives him the same advice. It’s good advice but isn’t that the worst thing ever – when someone feeds your own words too you. Good Kyle for caring. Bad Kyle for the method.

Things do seem to be picking up for Megan when she tells Mike about her pregnancy and they have a wonderful affirming moment and everything looks sunny and heading up and they’re looking so good together.

Until, when babysitting Amber as well as her own daughter, Megan is possessed while unnecessarily stark naked in the shower. She slams Mike’s head into a mirror, killing him. Amber frantically calls Kyle – telling him that Megan has the same disease that Alison had.

I have to cringe at this, even if it’s predictable. I know the demons are drawn to Kyle and tend to hit people in his life – but so many of them are women. So many of the possessed people who are truly victimised in their exorcisms are female. We’ve had 1 child. 1 prisoner – who wasn’t victimised like the others (they abandoned him quickly) and Sidney. Again, who hasn’t suffered through the violent exorcism either. Then we have a whole lot of women – old women, young teenagers, his ex-wife, his mother, Kat. Women women women are the ones who are tormented with possession. Men get off lightly