The Frankenstein Chronicles, Season 1, Episode 1: A World Without God 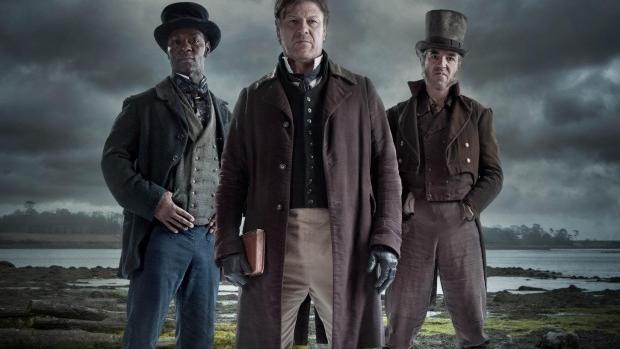 London 1827, ah Regency – kind of Victorian but with more debauchery.

There are three kinds of Victoriana/Regency out there I’ve found:
Decorous which is all big houses and pretty clothes and intrigue, usually involving Rules of Decency and terrible terrible liberties
Swashbuckling, which has lots of brass and waist coats and brave man facing terrible peril and monsters (like brown people) in foreign lands.
Gritty with big bleak cities, lots of fog and poor people and everyone has cholera.

This is definitely Gritty.

Let’s look at the characters introduced.

Firstly we have Generic Angsty White Guy, inspector Marlott. He works for the River Patrol, hunting down opium smugglers and generally not being super popular with his fellows because Gritty. He finds a body of a child during one of his investigations – and this body seems to be seven separate children’s bodies sewn together. He has been recruited by the Home Secretary Sir Richard Pool to find out who is behind this.

Marlott also has syphilis, taking mercury, a requisite dead, tragic family (which may or may not be his fault because ANGST) and a loss of faith and a need for redemption.

Honestly, I’m not inspired. I’ve just seen so many of these characters. Grim, gritty, angst-laden, standing on a fridge of dead women and practicing his rugged grim suffering look which I’ve seen so many times over and over. Yawn not another one!

He has sidekicks – an urchin and Nightingale. I like to think Nightingale will be a well developed, interesting character but part of my cynically thinks that his inclusion involved the following discussion:

Producer #1: Shit… I’ve just realised the only Black person we have is a nasty child abusing villain
Producer #2: it’s a historical…
Producer #1: Stop, we’ve used that excuse way too often, they’re not buying it
Producer #2: Fine, throw in a Black sidekick
Producer #1: that’s good we can introduce his family and show how they live in 1827 London, the challenges they face and…
Producer #2: Make him an orphan.
Producer #1: Oh…
Producer #2: But a nice guy! That should do it.

Anyway, maybe this is my utter cynicism and I do hope he’s more but I’ve seen this level of tokenism before and I’m not expecting a great deal. We see this a lot – remove him from any POC family/community, set him up as a sidekick quickly. It’s a pattern. I hope I’m wrong though

So, Sir Robert Peel is so focused on finding out why someone is making macabre jigsaw puzzles out of children because he’s trying to push a bill through Parliament that will regulate surgeons and ensure anyone slicing and dicing you in the name of health is qualified to do so. Sounds good. The less good part of this is that he wants to do this by also having the bodies of people who died in Work Houses made available to doctors for dissection/exploration/experimentation (the law allows for executed people to be dissected, but there’s not nearly enough supply to match demand –hence why “ressurectionists” – body snatchers – have such a roaring trade).

This law puts him at odds with Lord and Lady Hervey and many others who are shocked and appalled at this measure.

There’s a lot of meaty class issues here – not just the obvious one of the poor being considered akin to criminals and their agency over their funerary arrangements being completely usurped – but also with Lady Hermey cornering Marlott to insist he condemn the law when he carefully sidesteps. He’s directly employed by Sir Peel, he is put in the terrible position of telling an aristocrat, to her face, he disagrees with her or in repudiating his employer. She may talk of conscience, but conscience is not a luxury he can afford.

We have more gruesome class issues, of course, because this is Gritty and nothing says Gritty like urchins in grubby waistcoats, a brutal Fagin character, child prostitution, thievery and lots of grim. Nightingale becomes a sidekick because the police want rid of him due to his pesky habit of arresting wife beaters when the wives can’t pay for prosecution. And Marlott, in looking for the children who died to make the macabre jigsaw, quickly realises that the local police have collected a ridiculously tiny number of names of missing children. Most poor kids disappear and no-one looks for them

His friendly urchin does find rumours about a “beast” preying on poor children. And he follows up on the disappearance of a girl called Alice and stumbles across several (well 2) references to “Lyca” from a poem by William Blake. Which he takes to be A Sign for some reason. Because when looking for lost children one should always consider poetry

So… I’m intrigued, but I’m not excited. I am interested in a Frankenstein retelling which is less about the monster or Frankenstein, that’s definitely interesting. But I can’t say Marlott particularly fascinates me