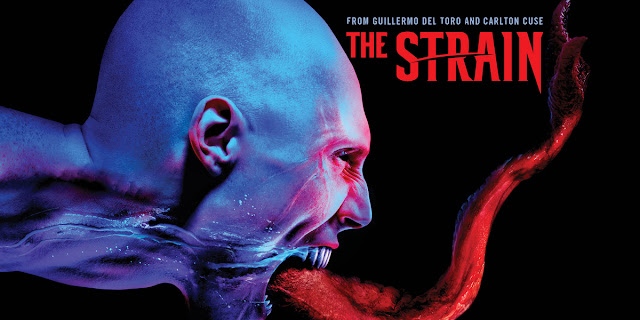 After one of those weird hiatus things, The Strain is back.

It is now 23 days after the infection started and a nice little prequel beginning tells us that though the army has been dispatched to New York, other cities are also being hit by the vampire menace. The plague is spreading.

Justine still leads the city and still manages to be awesome (which is essential to try and balance the sheer loss of female characters on this show), but can do little to get more resources to help the city. As she repeatedly tells Ephraim, their winning and claiming back ground – but the casualty rate they’re taking is not sustainable and it’s all going to fall apart. To make matters worse, Ephraim’s super bioweapon is becoming less effective

So is he. He’s torn by nightmares, drinking, scavenging in the ruined areas of New York and not coming back to mastermind the whole plan with Justine as she wants (since he could teach others to actually synthesise the weapon). He remains, unshockingly, an arsehole and a reckless one at that, constantly risking his expertise needlessly.

He’s focused very much on Zach – which is why the Master is using Kelly to keep Zach alive in order to trade him for the Lumen. We do get some interesting indication that Kelly is still partially human… but only when the Master doesn’t overwhelm her brain

That Lumen is still Abe’s obsession and he has spent a week studying it – but slowly. I think we’re seeing a very shaken Abe now, he’s put all his faith in the book while at the same time is almost paralysed by failure since he’s acted so many times against the Master now and each time not known enough, not been ready. We can see Vasily losing some of his powerful respect for the man as Abe continues to be indecisive.

Quinlan, the half vampire, is also growing impatient with Abe’s slow progress. He’s also still meeting with the Ancients to try and solidify their alliance (he definitely does not support or serve them and isn’t a big fan of them generally but enemy of my enemy and all that). The Ancients aren’t mad fans of the Lumen – with its knowledge on how to kill them – being in Abe’s hands, but since the Master has already killed their old world counterparts they’d be fools to make a big thing out of it.

Which leaves us with Vasily, perhaps the only person who is felling positive about everything. He’s guiding the navy seals around New York, sending them into the tunnels with his encyclopedic knowledge to wipe out nests of vampires. They’ve even finally accepted the idea of there being a “king vampire”, Bolivar. It’s him they want to hunt down, kill and save the world. This does mean that they’re not doing what Justine wants – helping her methodically secure New York

…to which I say… really? This show has shown that New York is not doing well – but we’ve also seen several boroughs vampire free and fighting back. It’s also been only 23 days since this infection started. 23 days? How can the US, the country whose military spending has long since past the ludicrous and we now need whole new adjectives to describe how over-the-top-ridiculous it is exhausted so much of their military arsenal that they’re writing off their biggest city and financial centre?

No. I’m going to need more than this – I’m going to need to hear about a draft. I’m going to need to see much of the rest of the US – the world – on utter blazing fire before I’ll believe that US is going to abandon NYC because a couple of squads of marines haven’t got the job done. In fact, not only will I want to see that but I’ll want to see that AND good reason why the US isn’t abandoning EVERYTHING ELSE before abandoning NYC. Seriously – give me a few episodes of radio reports that Baltimore, Portland, St Louis, San Diego have all been completely wiped out – then I’ll start to believe that the US is writing NYC off.

Anyway, bizarre priorities aside, the troops keep going into the tunnels until they find Eichmann… who lures them into a trap. Vasily manages to rescue two but the rest are wiped out by vampires and Bolivar himself (and their new ability to make screechy noises that hurt human ears, apparently?)

Last person to catch up with – Augustin, Gus, is looking after his vampire mother by chaining her up and feeding her his blood. No way that’ll end well.