The Elusive Elixir (An Accidental Alchemist #3) by Gigi Pandian 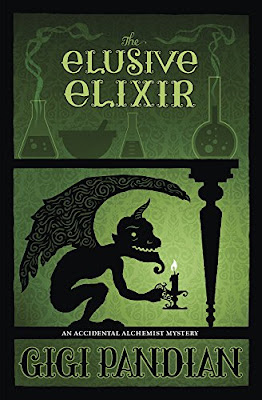 Zoey has travelled to Paris to try and find some answers to Dorian’s condition before the gargoyle turns completely to stone. But she finds few answers – and worse, seems to be recognised as the alchemist who lived their 70 years before

Fleeing back to Portland, trouble seems to have followed her. She may have finally found the backward Alchemists she has been looking for, but they’re not as helpful as she’d hoped – and may present a whole new risk as well as bringing revelations about her past she never imagined.

I think this book improved on many of the issues of the previous book. The storylines that Zoey was involved in actually made sense. She had a reason to get involved in the murder investigation, she was personally invested either directly or indirectly in all of the events that took place. She either had to protect friends and people she cared about or she was directly affected as it was a threat to her and her alchemical secret

This made the whole thing a lot more interesting especially as we build on more of Zoey’s past, her relationship with Ambrose as old figures from her past come back to haunt her. It fills in more gaps and also really develops the nature of Alchemy and the concept of Backward Alchemy. I really like the revelation that Zoey has here about Backward Alchemy – the whole idea that, ultimately, Alchemy is really really hard work. Alchemy take study, dedication and a lot of work and research. Backwards Alchemy isn’t so much evil or wrong or broken as much as it is lazy – it’s the ultimate short cut which leads Zoey to question whether she is actually going to find any solutions from Backwards Alchemy. Which in turn comes with a whole lot of soul searching and the creeping, horrible realisation of what it may actually take to save Dorian… and whether that is worth it.

The antagonists come with a lot of twists back and forth – assumptions are challenged and challenged again and then challenged again. We also get some really difficult positions when we see friends of Zoey make difficult, painful decisions and face terrible moral quandaries… and fall short. And I like that. Far too often in books characters seem almost impossibly good. They are willing to sacrifice everything, they’re willing to drop their hopes even their own survival for the greater good. Sometimes people just aren’t that perfect – especially when it comes to life and death. I like the clarity of the conflict there.

There are still parts that, for me, don’t make sense. She talks about the persecution of alchemists in the past and the need for secrecy but there’s no real bringing that up to date. Why would she believe that would happen today? Especially since she says she loves Portland precisely because it is so new agey and accepting. Equally, there’s a whole side plot where she desperately flees France because an old woman claims she remembers Zoey when she was a small child. This is a reason to run?

Zoey, when an old lady goes to the police, points to a young women apparently in her 20s and says “she’s a 90 year old murderer!” then that young lady does not have to be worried but that old lady may get a medical assessment to see if she needs help or support.

The police also don’t ask you lots of searching questions about a crime your grandmother may have committed decades before you’re born. In fact the police generally have a file for people who were killed when just about everyone from that time is dead – it’s called the big “who the hell cares!?” pile. It felt like a very convoluted way to force the story forward

I also can’t really get behind Zoey’s relationship with Max. This is supposed to be her prime romantic relationship and she does spend a lot more time with him this book (in previous books she tends to see him then try to rush away or get him to leave) but I still don’t actually see any chemistry at all between them. I think it’s made worse by Zoey’s annoyance with Max for not believing in Alchemy despite having no evidence that it actually is a real thing. It’s like dating someone and being steadily frustrated that they won’t keep an open mind about alien abductions and how lizard people rule the planet. If you can’t or aren’t willing to prove supernatural claims, you can’t act like they’re being super close minded for not being open to believe in them. Seriously you’re asking Max to believe that lead can be turned into gold because his grandparents once made herbal remedies. The relationship just makes me cringe.

Diversitywise we do have a number of capable of female characters, though the focus is overwhelmingly on Zoey herself and none of the other women are especially prominent. Zoey has a Black friend with a detailed history from the last book – but he only appears in a phone conversation. Max is Asian but, as I’ve said before, is a love interest of Zoey and just not a great character or relationship. There are no LGBTQ characters.

This has definitely moved up a lot further from the last book. I do think the ending is, perhaps, a little too easy simply because the last minute solution was really really convenient and out of nowhere. In fact I’d really love to have seen that developed a lot further – I wanted to see Dorian’s development of this I think it would have been far more interesting than seeing the whole French police chasing 70 year old crime storyline. This book felt like an ending – and if it is then this is a very satisfying close to the story. If it isn’t, then it’s nicely set up to still have more to say in this fun world and original concept.