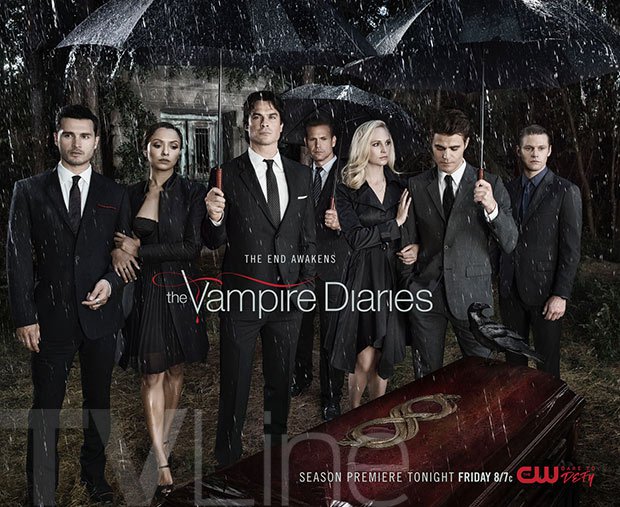 So begins the last season of The Vampire Diaries (before we have a much more awesome Bonnie spin-off. Hey I can hope, right?)

This was apparently a bad killing spree rather than, y’know, their regularly scheduled weekend killing spree that happens all the time and we tend to ignore it because protagonist!

When we catch up with them they’re luring people to a serial killing warehouse, targeting evil people (this means their killing spree under the control of the Vault Monster Enzo and Damon are actually more moral in their killing for the Vault Monster than they are when they have their usual fun slaughter fest). The evil people are then put on meat hooks lowered into a pool with the nasty looking monster and promptly eaten. Their remains then left to decorate the ceiling, as one does. Just because you’re mind controlled by a watery serial killer with some kind of conscience doesn’t men you can neglect the interior decorating

While Damon is almost indifferent – because he’s pretty much broken. He’s turned off his humanity switch to deal with what he’s being forced to do, he’s lost all hope and generally despaired of anything getting better ever. He’s even reduced to reading Fifty Shades of Grey

Bonnie and Stefan are still looking for Damon and Enzo and Bonnie is succumbing to utterly bleak despair, clinging to the memories of Enzo and her to try and convince us that this relationship wasn’t made up with no basis after one of the writers got into the hard drugs and everyone was still desperately trying to find an excuse to keep Enzo around because he was too hot to dispose of.

I have to say Caroline and her desperate attempt to organise everything and her constant worrying and fretting to be the only character I’m still invested in. I mean, I like Bonnie, but I honestly just want her to leave Mystic Falls so far behind her that she’ll forget everything about this place.

Alaric has, somehow, taken over the running of the Amoury (and has inherited a pair of interns) to try and find out how everyone escaped from the evil basement. They do find a magically hidden tunnel which leads to a vault full of surprisingly preserved shinies. Shockingly, exploring the secret hidden basement doesn’t get them all eaten by evil things. Honestly that’s practically a rule! You can’t have people discover secretly hidden vaults an not have them eaten by zombies, cursed or at least have to wash off some primordial ooze.

But while he’s spelunking one of the St. John’s (who controlled the Armoury, I don’t remember this one’s name and it doesn’t matter because she doesn’t last long) decides to try and kidnap the girls after slitting Selene’s throat – before Caroline arrives uses amazing vampire blood to heal the pesky slit throat and making it clear that attacking her kids is not ok. Why is this woman attacking the kids? No clue at all because she just rambles away about the basement before chewing out her own tongue

Turns out vampire blood can cure a slit throat but not a chewed out tongue.

This gives Alaric a major case of the guilts because he was so far away when his kids were attacked and clearly Caroline, despite being a vampire, needs his human arse to be closer in case she needs some collateral damage to make the next time someone attacks

These leads to some house moving with Alaric moving into Caroline’s childhood home and  Caroline moving in with Stefan. It all goes waaaaay simpler than it should.

Following leads and trails of bodies, Stefan and Bonnie do eventually find Damon and Enzo.

Except that means finding a Damon under the control of his humanity, devoid of any hope and convinced he’s going to hell – in fact there’s lots of rambling about hell and how he is damned and doomed and redemption is a lie. Damon has become positively maudlin. This kind of really hits Stefan who naturally, being Stefan, goes on a whole self-hate woe-is me about this

It doesn’t help that Enzo, while still human, also tells them to go. With Stefan holding Bonnie’s throat (really people have threatened Bonnie’s life so many times that she must be positively blasé about it by now).

They end up having to leave. But Bonnie puts together the clues that Enzo has been leaving her, all pointing to Odysseus (a book she and Enzo read in one of their desperate-please-believe-this-romance flashbacks). Clues as to the nature of the thing in the water – a Siren

Who just finishes her last meal, provided by Enzo and Damon – and arises from her little bloody pool.

Ok, I can’t say I predicted a siren, so points for that. The rest? I don’t know. I’m just so uninvested in so many of these characters and the whole horror of being forced to kill lots of evil people when this show already has a death count on par with the entire population of Virginia fails to strike a major chord with me.