The Walking Dead: The Implications of Glenn's Death 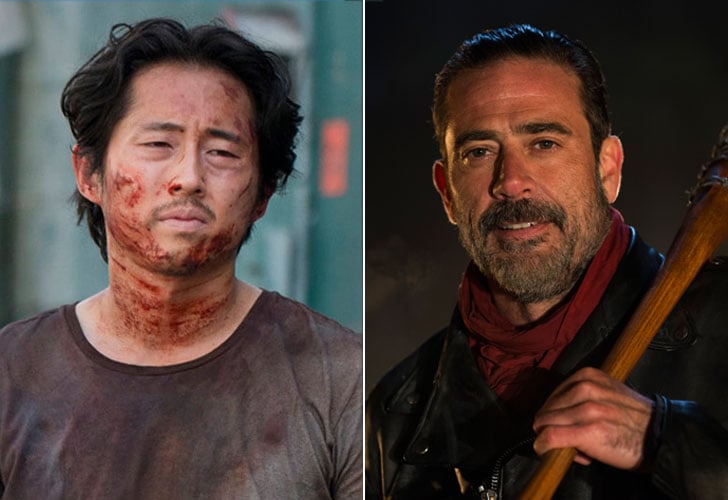 The Walking Dead returned for the much anticipated and dreaded season 7. Like many, we wondered which character would actually die at the hands of Negan and Lucille. Turns out we were wrong - but there’s a lot to talk about concerning the demise of one of the characters. On this opening episode of The Walking Dead, Abraham and Glenn died. And we’re going to look at Glenn’s death in particular, and what that means

In many of our posts we have talked about the deaths of minorities - which is why we’re focusing on Glenn here. Yes, Abraham died as well, but many of the issues that surround and are affected by Glenn’s death simply do not apply to Abraham. The positives are not noteworthy and the negatives are not damaging because Abraham is a cishet, able bodied white man in a sea of powerful, valued, important cishet able bodied white men in The Walking Dead, in the genre and in media in general. Abraham’s death will never cause waves in the same way a drop is unnoticed in the ocean

While Glenn is a torrent in a very shallow pond.

One positive we definitely do have about Glenn’s death is the impact on the audience and other characters. We’ve mentioned before that the death of POC on the Walking Dead has pretty much the same emotional impact as your 7 year old’s goldfish: it’s moderately sad but not exactly worth getting upset over, and pretty soon Goldie III is going to be replaced by Goldie IV and if you’re lucky, little Timmy won’t even notice. T-Dog, Noah, Tyrese, Bob, Jacqui (remember her?) Oscar (remember him?) Caesar, Shrumper (you didn’t even know they had names, admit it), Dr. Caleb (if I didn’t call him doctor you wouldn’t remember him either) - these characters died, we barely noticed them, they certainly didn’t matter and often they were replaced.

We can safely say that Glenn was not one of those unnoticed deaths. In fact, we even noted in the review that we viewed Abraham’s death as a relief. We weren’t exactly rooting for Abraham to die but if someone had to die, it might as well be Abraham. Abraham was one of the more preferable choices…. And then Glenn died. Abraham was a relief. Glenn was a punch to the gut. Abraham didn’t matter much to us. Glenn did. With Glenn, The Walking Dead developed a character, gave him a storyline, gave him a family, gave him people to care about and who cared about him. Glenn was a character, not a replaceable extra, Glenn mattered. That’s important.

Unfortunately, while the impact of Glenn’s death was important, part of how that impact was portrayed was extremely problematic.

Because this death was all about Rick.
Why was Glenn killed? Was it because of anything Glenn did? An action he chose? A mistake he made? A choice he made? Was Glenn’s death about Glenn at all?

After Abraham is killed, Darryl reacts in protest and Negan promises there will be a consequence.  The consequence is the death of Glenn.  Think about that for a moment.  Darryl is the one who committed the offense and Glenn was the one sentenced to pay for it. This very easily could have been Darryl’s death and in fact, it makes no sense for Negan at the time to then turn his fury to Glenn.  The only reasonable explanation of this is that Negan saw in Darryl strength that he could use to better his position and did not see the same in Glenn. This plays into the racist idea that Asian men are not as masculine as white men and certainly not men to be taken seriously.  This is quite the opposite of how The Walking Dead has chosen to portray Glenn ever since his meet up with the Governor in Woodbury. Why then would they return to this just to have Negan slaughter him?  The bottom line is that they decided when they published issue 100, that this was always going to be Glenn’s death. Whatever they had to do to get there and still hopefully surprise the audience along the way, they were willing to do, hence the decoy death of Abraham.

Of the men held hostage on that fateful night, Aaron, Eugene an even Glenn were silent.  In fact, Glenn doesn’t speak until his head is so bashed in that his eye has fallen out of his socket.  His last words are a promise to Maggie that he will find her.  Unlike the Rick, who spends the entire episode simply seething with rage, Abraham who tells Negan to suck his nuts and Darryl who jumps up in response to Abraham’s murder, Glenn is silent and submissive. Only the female characters are as quiet as Aaron, Eugene and Glenn which really says something about how coded this scene is in terms of gender.  It’s fair to say that Rick, Abraham and Darryl are clearly understood and have been portrayed as hyper masculine. Dystopias have a long history of validating white male hypermasculinity while feminising beta men or creating men of colour as beta regardless of their skill set.  Remember, it was Tyrese who watched Judith, while Carol made the decisions and was the strong one. The team had no problem dropping Glenn down a well to remove a zombie and it was Maggie who had to tell Glenn that this wasn’t cool. The only time we’ve ever really seen aggression from Glenn is in defence of Maggie.  Furthermore, it’s telling that Michonne is the only woman to speak during the confrontation and then, it’s only to defend a child, thus clearly sticking within strict gender roles.

But not only was the actual death entirely about the white men around there while he knelt there, nothing but a target, but the reaction to that death similarly centred him. The rest of the episode didn’t allow us, for example, a montage of awesome Glenn images as we remembered the life we’d just lost. It didn’t even centre on Maggie, his pregnant wife. And, let’s be clear, this show has epicly depicted this relationship - Maggie and Glenn have and would crawl over broken glass for each other. When they were split up after the prison fell not for one second did either one of them lose focus on the other, not for one moment did either of them give up on the other. There’s a beautiful moment when Maggie destroyed Glenn’s picture of her because he would never need it because they’d never again be separated

This is an epic love.

Yet we only remembered Maggie at the end. Instead we focused on Rick - over half the episode is Andrew Lincoln fearing his face may freeze in that “blank torture shock face” look. Even this couldn’t be all about Glenn - and not just because of Abraham (and, I’ll concede that Glenn was definitely the greater shock) - what actually broke Rick was the threat to Carl, his son. Now obviously Carl will mean more to Rick than Glenn, that’s obvious - but it further redirected the focus away from this death. We were not invited to witness and share the grief and loss of Glenn. Instead we watched the shocking moment when Rick was brought low. This wasn’t an episode of the pain of Glenn’s brutal passing, this was an episode about Rick’s fall, Rick’s humbling, Rick breaking. Glenn was a symptom in that, a line in Rick’s story, a motivation in Rick’s devastation. Again, Glenn’s death was not about him

Perhaps even more galling about this is that Rick and Glenn really didn’t have a hugely strong relationship? When was the last time they were both alone together since Atlanta? When did Rick turn to Glenn for advice or to speak on loss or discuss the issues they face? He’s done that with Michonne and Carol (wisely since she’s Carol after all). He’s consulted with Morgan, he’s discussed and debated with Abraham and Daryll and other leaders they’ve come across - including Maggie - as well as designated Jiminy Crickets, Hershel and Dale. But Glenn? Has Glenn ever been in Rick’s inner circle? I don’t think we got to see that, not nearly enough.

And there’s the final elephant in the room. With Glenn’s death The Walking Dead has killed their main Asian character. No, The Walking Dead has killed their only Asian character. The only other Asian appearing on this show for more than one episode (if you trawl through IMBD you will find a very briefly appearing Tim, one of the random people Michonne has stabbed). As an extremely under-represented and highly stereotyped group, this loss looms large, especially since his role was largely free of the Asian stereotypes that are so very prevalent.

Compared to some of the other terrible deaths in the genre and certainly in The Walking Dead there are some definite positives to this portrayal: Glenn mattered and we can’t emphasise enough how sadly rare that is. But in the coming weeks to truly give this epic character the importance he deserves we need for his death to be about him, we need the grief to be for him, we need the loss to be about the void he has left: not how this affects Rick’s view of himself and leads to the development of Rick’s character and Rick’s storyline

Glenn’s death can’t be all about Rick. But nor can it be all about Negan either: this is something the comics did poorly as well; Glenn becomes a footnote in the chapter of the battle against Negan, the opening salvo who is neither referenced in the coming storyline nor affects it to any significant degree. In the comics, Glenn is almost forgotten, the ripples of his life quickly fading. In their eagerness to tell a fast paced, blood soaked confrontation story, The Walking Dead cannot make Glenn a brief introduction to this storyline. He cannot be buried in the woods, out of sight, without Maggie visiting his grave and forgotten while we follow the storyline of Carol showing Negan the flowers. We fear this will be Glenn’s ultimate epitaph - a footnote, quickly passed over and consigned to distant history as the the storyline heats up and speeds up.
Posted by Renee at 9:00 AM