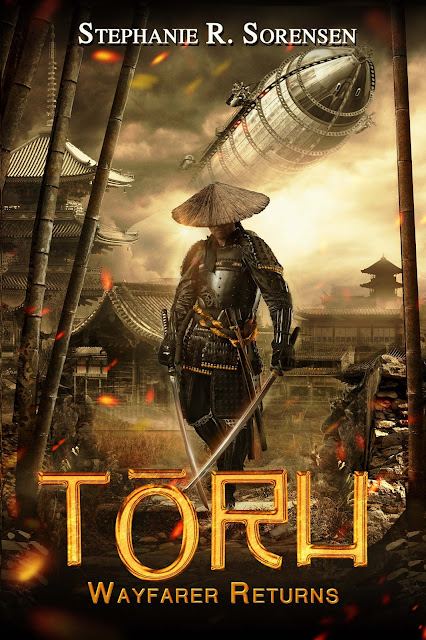 Japan isolated themselves from most of the world under the policy of sakoku, limiting its contact with foreign nations to preserve the Japanese way of life – until Americans forced the opening of Japanese ports with “gunboat diplomacy”

But the Japan of Toru the Wayfarer is different – this is a Japan where Toru, a traveller, returned to Japan from the west with a warning – and guides to technology that may save Japan and keep her independent: able to say no to the inevitable arrival of foreigners

While this book was advertised as a steam punk, I think it is much better termed an alternate history since, beyond a few dirigibles and dubious submarines, there’s little steampunk element

The book contains a lot of historical references and research drawing on actual events of the time as well as actual daimyos who were present and involved in Japan at the time. It includes a lot of history of Sakoku and policies around it.

We follow the story of how Toru, returning to Japan after visiting America – back when it was illegal to do so and returning from abroad carries the death penalty under the isolationist policy. He brings with him lots of information from the west including a whole lot of guidance on technology and weapons – and the warning that the Americans are coming. There is a lot of references to the Unequal Treaties and stark warnings using China as an example of how a mighty, ancient and great nation in the world can be utterly abused by predatory treaties forced on them by gunboat diplomacy.

While Toru is certainly bringing in western technology and knowledge to help “save” Japan, there is a definite emphasis on the Japanese working together, working to keep themselves independent and free from brutal unequal treaties. This is not a white saviour narrative, every character in this book – except the late arriving western threat – are all Japanese and there’s even an attempt to at least make the names of the technology they’re adopting to fit Japanese pronunciation and word structure. There’s also a major point that the technology would be adapted to Japanese ways – for example, introducing sewing machines doesn’t mean that they’re going to produce western clothing – they will make yukata and hakama. To quote:

“Technology serves a culture but need not define it.”

In addition to Toru we have his two very good friends who do a lot to help him: Jiro, a peasant Blacksmith who had to overcome classism to be able to meaningful be involved and truly help and contribute to the movement. His skills were utterly essential to the overall success. The same applies to Lord Aya’s daughter Masuyo whose skills are just as essential to the movement succeeding who faces the full stifling pressure of the rigid gender roles expected of her. It’s good to see both of these representing different oppressions to overcome to add their essential skills to the movement

What kind of makes this book a little dull to me is how simple it is. Everything is resolved far too quickly, far too easily and with so little actual real conflict and no real negative consequences or fall out

Part of this is because Toru seems to have – without it being depicted – a kind of legendary mind-controlling charisma that I haven’t seen since the absolutely awful Sword of Truth series. He achieves amazing things, changes the minds of Daimyo so very quickly, easily and almost universally. He speaks to people and lord after lord are just willing to complete over turn their entire culture. We’ll have a brief protests – no woman can’t be engineers! And then women are engineers. No peasants can’t be warriors only samurai can be. And then we have peasant soldiers. They need to convert more lords to the cause… and they convert.

This also applies to Jiro and Masuyo – in theory we would see them battle and succeed against classism and sexism in their society – but it’s just so simple and easy that there’s no conflict there, just bang, oh look she’s running around in trousers now and Jiro is an airship captain! Centuries of rigid oppression dealt with!

I’m not even including the simplistic idea that a collection of books Toru managed to pack is his luggage contained enough information to allow a complete industrial revolution on a grand scale – from inventing trains, connecting half of Japan with train tracks, inventing and mass producing air ships and submarines all within a year at most. I mean, yeah that’s pretty extremely dubious but I’m willing to overlook that because fiction and incredible genius characters are not uncommon protagonist or main characters.

But the sheer willingness of everyone but the Shogun (who is pretty much ineffectual because of actual historical health issues – again kudos for the research) to jump on board Toru’s plan with no real objection, hold outs or resistance. It’s so simple – this is a huge political and cultural upheaval, changing centuries of tradition and their way of life – and everyone’s kind of “sure!”. The one time there’s any question of some shakiness is one lord who seems willing to take the new technology and launch an imperialist war of aggression – but one speech from Toru and he completely drops it.

And what about the actual consequences of rapid industrialisation. Within a year most of Japan has train tracks and telegraph wires. People are being trained in engineering and more and more manpower is heading to the factories.

This is not simple – look at most examples of historical industrialisation, it is rarely a painless process. There’s no mention of a corresponding agricultural revolution (which generally itself comes with a lot of upheaval of seized land etc) so how is this country still feeding itself as all of these food producing peasants now working in factories? How are these lords – including the main daimyo, Lord Aya, who is describes as poor, even managing to pay for all of this labour and resources? Especially in a nation that already has very limited trade. Even all these blacksmiths being called in to the factories – if a huge number of villages lose their blacksmiths, this has consequences.

This book covers a vast change of the labour force, the national wealth, industry, training, economy, culture, history, tradition all within an incredibly short time – and it all goes so ridiculously smoothly it’s actually annoying. This simplistic nature of this book is frustrating because this is the POINT of the book. The whole book is covering an alternate world where Japan industrialised before Commodore Perry forced the end of Sakoku: if you’re going to write this book then why not actually write it? Why miss out the very elements that would make this complex, interesting and fascinating? Without this all I can assume is this is a prequel for the actual steampunk to come in future books.