The Walking Dead Cliffhanger - who will die? 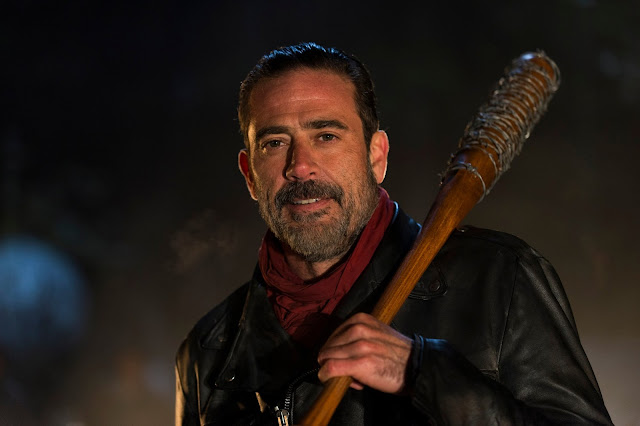 The Walking Dead returns for season 7 this weekend and there’s one question everyone's asking after the completely inexcusable cliffhanger of last season. Who is Negan going to kill?  In issue 100 of The Walking Dead comics, it’s Glenn who we say goodbye to in the most gruesome way possible.  Negan swings Lucille (his name for his bat) without mercy as Glenn calls out for Maggie.  My heart absolutely broke when I read that scene, particularly because Glenn had been with us from the very beginning.  Being issue 100, clearly the writers wanted to make it memorable for their fan base and what better way to do so than to kill off one of their most beloved characters.


In the television incarnation of The Walking Dead we have finally reached the point in the story where someone is going to meet Lucille up close and personal.  This means that someone, probably someone who we love is going to die.  Thank goodness Carol is on her way to the kingdome.  The speculation has been endless since last year’s season finale as to who this would be.  As fans of the series, we have engaged in our own speculation as to Negan’s first victim.  Join in the comments and let us know who you think is about to meet their end.


Rick
Despite its billing, The Walking Dead is not Game of Thrones. This isn’t a show where anyone can die. There’s absolutely no chance that Lucille can penetrate Rick’s plot-armour. Rick will live to see another season. Many many more seasons. I am curious to see what excuse Negan will come up with for not killing the leader - in the comics he didn’t want to “make him a martyr” or kill a disabled man (Rick in comics has one hand - the Governor cut it off). So what’s the excuse this time?

Carl
The above pretty applies to Carl as well - he’s too much of a central figure (and becomes far more so in the comics) for the show to kill him off. His plot armour may not be as impenetrable as Rick’s but it’s still far too tough for the likes of Negan. Caaarul spent an entire season with everyone looking for him, he has been shot and healed by a vet, shot in the face and healed by a med tech. Carl is Wolverine. Carl will not die.


Aaron
Now Aaron has no plot armour at all - but we still don’t think he’s likely die. Aaron is waaaay too much of a minor character. This isn’t a minor character death. This isn’t Noah or Denise. When Aaron dies it will be in a random episode, will make maybe 2 characters sad and the next episode everyone will have forgotten.There’s no way all of this cliffhanger nonsense has been perpetuated for Aaron. This is going to be a main cast kill. Aaron will live to fill in the crowd scenes this season

Rosita
Again, like Aaron, Rosita simply isn’t important enough to kill this dramatically. Her one storyline has been to be Abraham’s rejected love interest and maybe start to hone in on Eugene. At very least that romance will need to develop a little so her death will case Eugene sufficient Manpain. We predict Rosita will live until Eugene is well and truly in love before she is stuffed into a passing fridge.


Sasha
We are still somewhat surprised that Sasha has lived as long as she has. Having two Black women on the same show - and on Walking Dead which defined the T-Dog Chain and doubled down on it, no less. However, like Aaron and Rosita, when the writers finally realised they’ve exceeded their Black people quota it will be in a far less dramatic fashion. This is a main character death, and Sasha’s lurking at the back, desperately needing a storylines, doesn’t count

Eugene
So Eugene is probably prominent enough to be shocking. He has been in the show a while and has something of a prominent story. We have seen his evolution from coward and liar, to him stepping being useful, being brave, learning and being willing to fight while still preserving his intelligence as his primary asset. Eugene is almost important enough to kill in this shocking manner.


Buut… we don’t see it. While he’s prominent and been around for a while he doesn’t exactly have a fan following. Eugene is Beth before she got the hospital storyline to get people rooting for her. Eugene is Bob, someone you recognise and know but you can’t say actually liked or cared about. People may be surprised, but not shocked and not overly bothered. The spectre of the mullet will continue to haunt us

Abraham
Now we’re reaching a character who is finally important enough to deserve a dramatic death. Not only has Abraham been a major character - but we’ve even explored his dark and ubersad manpain littered with fridged women. Abraham has been established. Abraham is major. Abraham’s death would be shocking


He also is dead in the comics by now - Denise’s death by arrow in the eye was supposed to be Abe but the writers switched them out to keep the story going. It’s possible they did this to save Abraham for this moment


However, we’re not convinced. We think Abraham has a lot more story in him before he dies (before he becomes too prominent and threatens the Rickocracy as an alpha cishet white man) and it seems dubious to have changed the story so dramatically to save him a few episodes ago only to take it back now.

Glenn
In many ways, Glenn would be the perfect choice. He, Carol, Rick, Daryl and Carl are the only original cast left. He has a large fan following. He’s a major major major character. And to top it off, Maggie is pregnant with his child and we’ve just had them both have a major speech about being positive for the future. This is the very essence of tragedy. Talking about being positive for the future?! They may as well have tied a noose! On top of that, they were THE couple to invest in on this show; Glenn and Maggie have walked through broken glass to be together - killing one of them would be ultra tragic. Perhaps this is more likely especially now we have Richonne to take the romantic-couple-to-root-for slo


The only reason he’s not favourite is he died in the comics. Why set up this ludicrously over-elaborate cliffhanger to just repeated what the comics did? Especially since they already did an “ZOMG Glenn’s dead!” storyline. After those shenanigans and the fact this “shock” has already been spoiled, we think Glenn is going to live not-so-happily-ever-after for some time

Michonne
Oh don’t you dare! Don’t you even dare touch Michonne! Michonne is such a fan favourite and a character that is finally getting some much belated representation and fandom is positively squealing over Richonne.
Part of me thinks this is so dangerous for her. The potential for her to be killed off for a big whack of Rick Manpain is high. And there are few characters who would be as shocking to kill as Michonne. I want to hope she has enough plot armour to survive this - but she’s not Rick, she’s not Carl and can provide maximum Manpain for both. She’s on very thin ice.


She’s still not favourite to die, there’s so much more she can do and, honestly, the lady with a katana is just too awesome to put to bed and I doubt Walking Dead is going to throw that away… but safe? We can’t say she’s safe.

Daryl
In terms of pure shock value I think Daryl would definitely be favourite - and this scene is all about the shock value. Daryl is also an original character from the first season like Glenn. Other than Abraham and Rick, Daryl is the character Negan is most likely to see as a threat making him a reasonable target. From a storytelling point of view, he’s also someone you can dispose of without disrupting the group. His potential romance with Carol has been derailed and he isn’t even all that close to anyone else in the group. Aaron has played his sidekick once or twice, but since Aaron is little more than an extra who has done nothing and barely appeared for several episodes, we can hardly expect that to hold him. He has few storylines of his own - he’s evolved and grown but where does he go from here? We’ve touched on his abusive past, his brother and his hold is gone, he has no budding relationship or growth or even family and we’ve already looked at how he doesn’t really fit into a secure settlement. In fact the death of Daryl, the ranger, the wilderness man could be symbolic of their transition from wandering survivors to settled civilisation builders.


Daryl is perhaps THE fan favourite. That could save him - or could make his death the shock that the writers are really looking for.


Daryl is Renee’s favourite for death

Maggie
While Sparky’s favourite is Maggie. See all that we wrote up there for how Glenn would be the perfect choice? It all applies to Maggie as well. The hope. The relationship we were all rooting for. The baby to come - only with extra pathos and crushing of that hope by killing the pregnant mother as well (something Walking Dead is willing to go for - see the death of Lori). We have the most epic of epic manpains for Glenn with the loss Maggie. We have the death of a very well established main character for shock value - to say nothing of her being a pregnant woman. To Negan, killing a pregnant woman is also the ultimate symbol of Rick being unable to save his own people.


Maggie is Sparky’s favourite for death. This fridge promises to serve infinite Manpain