Review of The Walking Dead Issue 100 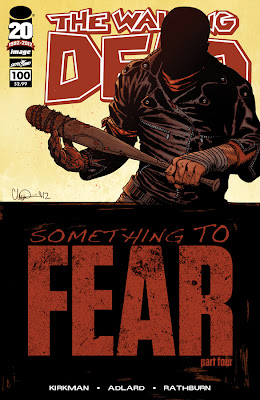 I know that we haven’t been talking a lot about the comics because we have been focusing on the show, but as a fan of the series, we couldn’t very well ignore yesterday’s release of comic 100.


SPOILERS BELOW: YOU HAVE BEEN WARNED

As we approached issue 100, there was no doubt that it was going to be epic.  Though Rick et al had settled into a community, they were very short of food and the opportunity to share with the Hill Top - another group of survivors, was absolutely vital to their survival.  Unfortunately, a group of vigilantes led by Negan, (who really is The Governor 2.0 in many respects) is not happy that Rick thwarted his power in the area by killing a few of his men.

In some ways, I feel that Rick brought on the struggle with Negan himself because he did not bother to find out how many people Negan has at his disposal and simply declared himself king badass.  Zombies are deadly but unlike humans, they are not calculating and cold.  There is being proactive and then there’s being short sighted. In many ways, Rick's leadership has been blessed more by luck than rational thought out actions.  I know it is difficult to see the luck when you count the number of casualties, but honestly, it really could have been much worse.

This comic begins with Rick and Michonne realizing that they are not going to make it to the Hilltop before dark and therefore will have to find a place to camp for the night.  Maggie wants to keep driving but Rick deems this too dangerous, though he doesn’t know for sure if anything human is waiting to ambush them.  I suppose his declaration in issue 99 that Negan’s group would need to lick their wounds means that it’s an absolute fact. Why everyone around him just accepted this as fact because Rick (read: The great and powerful Oz) declared it so I don't quite know.

Rich and Michonne have a chat, in which he finally gets around to thanking her for always having his back.  I was actually quite surprised by this because it has been a long time since we have seen Rick do anything even remotely humble.  When they exchange watch for the night, Rick falls asleep and is overtaken by Negan and his men.  Gee, who would ever have seen that coming?

Negan wants his pound of flesh but can Rick keep quiet for one minute?  His life, his son’s life and everyone in that van is in danger of dying, but why take that into consideration when you have the opportunity to play tough guy? He should have played it smart and followed Carl’s, lead.  Carl actually had the presence of mind to call Maggie mommy, in the hopes of reinforcing the fact that he is a defenseless child.  Negan sees this for what it is but spares him. More and more, I am starting to see that though this story is very much told from Rick’s perspective, that perhaps Carl is the one we should really be paying attention to.

What I found interesting, is that Negan chose to spare Rick because of his disability and because he didn’t want to make him a martyr, and the Black characters because he’s not a racist, but then chose to focus on Glenn.  Since when did Asian people stop being a racialised minority?  Now I get that we are meant to see Negan as psychotic but erasing Glenn’s status as a person of colour was not cool.

Then came the moment I feared.  There was no doubt that someone was most certainly going to die.  The thing with The Walking Dead, is that it has made it very clear from the beginning that anyone at anytime can die, but that does not stop some characters from being fan favorites. With each published comic where they somehow manage to escape death or violence, you begin to believe that against all odds, they will continue to be safe.  We knew better but that does not mean that you don’t reach a level of comfort just by their presence.

In case you haven’t guessed it, they’ve killed off Glenn.  He was beaten to death by Lucille - a bat wrapped in barbed wire. As I moved through each frame, I kept hoping that Negan would stop just short of killing Glenn.  Maggie is pregnant and they were planning on leaving Rick in the hopes of better security and resources at the Hilltop.  It almost feels as though this punishment for deciding that Rick doesn't necessarily provide the most safety or the better established community.  Of course, Rick vowed that he would one day kill Negan, which he probably will but that brings me absolutely zero comfort.  Rick, as the White avenging angel seeking justice for the death of the lone Asian character smacks as just another burden for him to carry.

I know that there is no hope that this was a dream sequence, but I so desperately want it to be.  I would rather have seen Rick die than Glenn but as readers of this comic have come to learn - anyone can die - as long as they aren’t Rick.