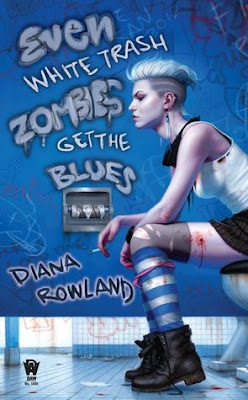 Angel is settling into her life as a zombie now, working in the morgue, eating her brains and dating her fellow zombie, Marcus. They’re a little wary from the threat of zombie hunters after the deaths in the last book and she’s still working to get her dad sorted out, but on the whole things are looking good.

But then things get more complicated – a body appears that makes no sense at all to the police – and is connected not only to the zombies but also to the zombies that were murdered by Ed the zombie-hunter in the last book. Worse, the body is stolen at gunpoint from Angel and no-one believes her story – finding it easier to blame her, with her criminal record than to actually listen to her. Her job and her easy access to brains are under threat – and the clue trail points towards experiments and projects funded by zombies and possible conflict between them.

As if that weren’t enough, her parole officer reminds her that she needs to get her GED or she’ll violate her parole, which just highlights her lack of education and the massive class gulf between her and Marcus who is studying for his Masters. To make matters worse, his friends and his uncle, an old and powerful zombie, are all vastly more educated and more wealthy than she and they look down on her from the vantage point of their extravagant mansions.

The plot and the mystery was complex and pretty well done. I did get close to lost a few times because of the weight of different people, different themes and different edges of the same platform. But part of that is because the mystery was held really well through most of the book and while I’m confused, so too is Angel. I honestly didn’t see the ending coming, not even close to it – there were multiple hints and, yes, in hindsight, clues that could have lead me there (I should have known to be alert for all the clever hints reading a Diana Rowland book! Where’s my flipchart?) but I was completely surprised when it all came together. There were plenty of twists, what I assumed was going to happened several times, didn’t – and the answers I was oh-so-sure I had were completely wrong.

I actually felt we were dealing with several subplots all running together and through that it was, perhaps, too much, but at the end they all came together into one, solid, interwoven story that also drew in the last book as well. Nothing was simple and nothing was what was assumed – and even when it draws on some very old tropes and very old story elements, it still surprised me because the journey to them was so unique.

Angel is still an excellent character. She’s very human, she’s clever but uneducated and that’s extremely well reflected. She’s funny, she’s snarky, she’s developing over both the series and the books, growing as a character and a person. She has flaws, but they’re reasonable, she makes mistakes but they’re not Spunky. She’s not a saint, she’s not ridiculously over-moral and she doesn’t have perfect insight but nor is she grossly self-serving and nor does everyone in her world revolve around her or instantly like her. She just has a really fun voice and it’s a joy to see the story through her eyes.

We also develop a lot what zombies are in this book, how they work and how they’re created –it’s interesting and plausible and it’s nice to have that solid world building behind it. There are hints of more world building behind it, including government involvement and different zombie factions developing over their extremely long lives, but both are only hinted at and I’d really like to see more – but at the same time I love that more wasn’t revealed since it wouldn’t have been relevant and would have constituted unnecessary info-dumping.

The coverage on class in this book is, again, truly excellent. Without being preachy or lecturing we’re shown again and again what a difference class and wealth make. Her poor school life that failed her, her public defender that failed to provide even a borderline competent defence for her, the system that let her down when her abusive, mentally ill mother was taken. She moves around people who are much wealthier and have had a much more privileged background, she is often judged and dismissed because of her lack of education (despite her often-proven intelligence). People constantly doubt her because of her past, not bothering to give any credence to either her opinions or even what she witnessed – assuming she is criminal or lying. The press pillories her for her past, her boss dismisses and sacrifices her because of it.

Even a reference to how expensive rehab is, especially without health insurance: Angel’s father wants to become sober, wants to stop drinking – but there’s so little help and their only choice is the alcoholic’s anonymous even though, religiously, neither he nor Angel are keen. They have such limited choices even while being shamed and attacked for their addictions.

And addiction is, again, presented as the truly difficult thing it is. Angel repeatedly credits her own release from addiction to her zombie state – that she couldn’t have done it (or not easily) without it. Her father can’t just magically clean up over night no matter how resolved he is, no matter how determined he is – and he is clearly trying.

What I loved most about this book is how Angel grows into herself, especially in terms of confidence and self-image; as Dr. Leblanc puts it, she is going from learning to survive (My Life as a White Trash Zombie) to beginning to thrive. She starts the book ashamed of her past, embarrassed and humiliated moving in the same circles of, ashamed of her lack of education, doubting her capabilities, her knowledge and her intelligence. But as the book progresses? She repeatedly calls out Marcus for treating her like a child, deciding he knows what’s best for her, hiding information for her, making decisions for her and discounting her opinions and ideas because she’s an uneducated woman– she rejects it. And it’s not just once, she continually does so, angrily and vehemently every time he does it rather than having a token objection then returning to the norm. It’s a deal breaker for Angel and one she will no longer tolerate from her boyfriend.

That is one of the most powerful themes of this book – Angel’s opinions have value, Angel is not unintelligent just because she’s uneducated, Angel is not worth less or less due respect just because she is poor, has a criminal record and hasn’t finished high school; even when surrounded by rich, educated professionals.

I love that, faced with her life stabilising and a likely very long life ahead of her, she chooses to improve things for herself. She wants to get her GED and maybe go to college, not because she’s embarrassed (she starts ashamed and hiding that she is taking her GED, but ends up announcing it without shame), not because her parole officer demands it – but for her, because she wants it.

I also like that, after his repeated and severe offences, Angel doesn’t just forgive Pietro in the end because he admits he’s wrong and apologises. I love that forgiveness isn’t presented as something that’s owed (though Angel also makes a nice balancing argument about not holding grudges excessively) and that an apology does not automatically redeem someone.

We do have more inclusion in this book as well; not in the biggest roles but in roles that are not just background. Derren, one of her co-workers who she usually works with is Black, her parole officer is Latino, the woman at the forensic labs is Asian and the police detective she speaks with over the case is gay. They’re not in prominent roles, but they’re there and lacking in both stereotype and prejudice.

All in all, this is another excellent book that has built wonderfully on the foundation set by the first book. The world and characters have expanded and developed, the relationships have moved forwards in a realistic fashion (yes, there’s no love at first sight followed by eternal blissful happiness! They actually act like real people!) and we have a lot of really good story hooks that can develop meta-plot for a third book – and a longer story arc.

We remain Diana Rowland Fanpoodles and we praise in her name.